House of Xian Dumpling: From An Under-construction Menu, A Well-built Bowl Of Beef Tendon Noodles 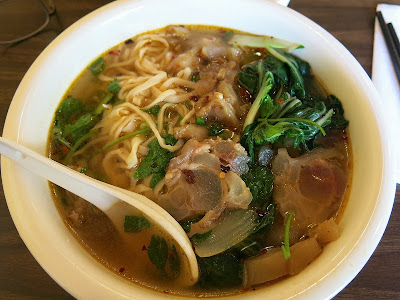 House of Xian Dumpling* recently emerged in the space on Kearny St. that long held Chef Jia's, and did someone say "hand-made noodles," here in my own 'hood? I was so there!

The name "House of Xian Dumpling" may look nice on a sign next to House of Nanking, where it sits, but doesn't tell the full story. House of Xian Dumpling's menu, at least as printed (and I say that advisedly) looks like a culinary map of China, especially Northern China, with Xi'an, Sichuan, Beijing, Shanghai and Shandong specialties that I could immediately spot, and even a few Cantonese Golden Oldies for completeness' (and tourism's) sake. I say "advisedly," because some portions of the menu have yet to be implemented. I asked specifically about the xiao long bao, shengjian bao, and xian doujiang from the "Dim Sum" portion of the menu, and they weren't ready with any of them, nor with skewers from the "Hot Appetizers" menu.  It may be a case of "first design a menu then find the talent" (which certainly has been done before), and since they went to the expense of printing the menu in full-color, I'm assuming they are committed to it. In any event, they were ready with the noodles and dumplings, and noodles were what I was there for. 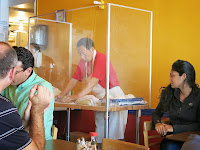 The noodle section of House of Xian Dumpling's menu, which contained nothing peculiarly Xi'an-ish that I could tell, led off with two hand-made noodle classics, "Braised Beef Noodle Soup" and "Beef Tendon Noodle Soup" and I chose the latter. Despite language on the menu, the noodles are technically not "hand pulled" noodles but rather "knife pushed," as it were --  dao bo mian (刀撥麵). These are made by stacking thinly-rolled sheets of dough in a pile and rapidly chopping and "pushing" the noodles away with a special cleaver, producing narrow, flat linguine-like noodles.  It's possible the the noodle-maker, who operates in a glass-enclosed "cage" in full view of the diners, also makes the more showy hand-pulled noodles, but he didn't do so while I was watching.

My noodles came to my table with an aromatic blast which reminded me more of a Taiwanese beef noodle soup than anything from Xi'an. Tasting the broth, I found the slightly medicinal spicing sharp and nicely balanced, and a default chili heat that didn't beg for augmentation. The beef tendon, accompanied by a few stalks of bok choy, was tender, by and large, though a couple of the larger chunks were on the chewy side. As for the noodles, they were cooked just right, retaining a slight chewiness from start to finish, and as pleasing to the palate as only freshly-made wheat noodles can be. At $6.95 for a bowl the size of a "large" pho serving, it was an ample lunch on its own, and something I will happily return for.

I'm looking forward to House of Xian Dumpling implementing its entire menu, which will  save me some trips to the Richmond and Sunset Districts; in the meantime I'll be checking out more of the restaurant's soups and dumplings. It's great having this font of comfort food within walking distance of home.

Now about that apostrophe.....