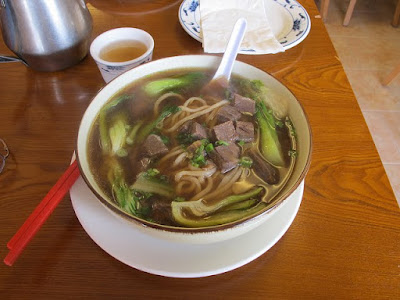 It's hard to believe a new restaurant in San Francisco featuring hand-pulled noodles existed for a full two weeks without me knowing about it, but I was clueless until a gourmand buddy, Al Cheng, posted a mini-review on Facebook of San Dong House in the Inner Richmond District. Needless to say, I was on it by the time of my next meal, which was lunch today.

San Dong House's menu presents a roster of 18 hand-pulled noodle dishes leading off a very ambitious bill of fare that lists over 160 items exclusive of drinks including (naturally), eight kinds of shui jiao dumplings and a staggering 22 "skewer sticks." The restaurant's dedication to the noodles is evidenced, however, by the noodle-making station in full view of the dining area, manned by a cheerful and enthusiastic noodle chef, and I was not to be deterred from my mission of vetting the la mian.

I selected the simply-named "beef noodles soup" for benchmarking purposes, niu rou la mian being the default offering in many parts of the Chinese hand-pulled noodle world. The noodles themselves were perfection, just the right thickness, bite, and chewiness for my tastes. The broth was beefy, well toward the Taiwan beef noodle soup end of the broth spectrum and away from the clear broth at the Lanzhou la mian end. It lacked the complex spicing of the Taiwan style broths, however, and I found it monochromatic and a bit too salty; it benefited from a dash of chili paste. The beef was an ample serving of lean cubes, a little on the chewy side. I'd choose a fattier topping or one with more textures the next time. Overall, it was a very satisfying bowl, credit going to the noodles themselves, and I'll certainly be back to try more noodle dishes whenever that I can fend off the small eats attractions calling to me from other sections of the menu.