This headline in the Huffington Post caught my eye. Alas, it turned out be a red herring, so to speak. It had nothing to do with noodles (or with music, for that matter). It turns out that in Texas "noodling" refers to catching c 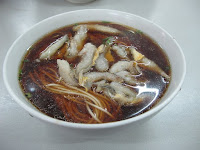 atfish with your bare hands, though the article gives no clue as to why it was illegal in the first place.

Oh, well. Perhaps some day I'll find a venue where I can get hand-caught catfish fish on my hand-pulled noodles. Are you listening, A Niang?
Posted by Gary Soup at 8:34 AM 0 comments 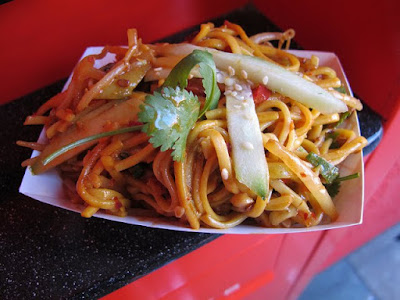 The late newspaper columnist Herb Caen once reported a conversation, allegedly overheard on the street in San Francisco, that went something like this:

"Have you ever noticed how many cities have Chinatown and Little Italy located right next to each other?" said Person 1 to his friend. "Yes," said Person 2, "I think it has something to do with Marco Polo."

Whether you can credit Marco Polo or not, San Francisco is one of the cities (perhaps the original one) in which Chinatown and Little Italy (known locally as North Beach) exist cheek by jowl, along Grant and Columbus Avenues and separated, more or less, by Broadway. This arrangement has experienced tenions in the past, but for the past couple of years the geographical and historical nexus has been commemorated with a "Cultural and Culinary Celebration" called "North Beach - Chinatown Noodle Fest." I'll refrain from questioning why it's not called the "Chinatown - North Beach Noodle Fest," since it was China that invented the noodle some 4,000 years ago (though Marco Polo made Italy its first takeout customer) and just say I'm thankful that the event was created.

At the NBCTNF, for short, you pay $20 for a "dance card" which you can fill with noodle offerings from three of fifteen stalls representing establishments on the Chinatown side of Broadway and three "pasta" offerings from fifteen stalls on the North Beach side, plus one drink from either side (hot tea, milk tea, or coffee). (The full lineup can be seen in this scan of a handout from the event.) There are also noodle and pasta cooking demonstrations, music, speeches, and (this year) Mayoral candidates pressing the flesh.

My three choices from the Chinatown side were Indian Mee Goreng from Penang Garden, Shanghai Noodle with Scallion and Pork from Bund Shanghai, and Cold Szechuan [sic] Spicy House Noodles from The Pot Sticker. I would have preferred to be able to choose all six 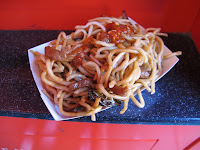 courses from the Chinatown side of Broadway, but I got to cheat a little by choosing Fat Rice Noodles with Chicken and Broccoli from King of Thai, which bunks with the Italian joints on "upper" Grant Avenue and therefore is a "North Beach" restaurant. For the record, the two non-Asian offerings that filled out my dance card were Shrimp and Chorizo "Potstickers" in Chipotle Creme Sauce from Impala, and Penne Pasta with Wild Boar & Musroom Ragout from Cafe Divine. My drink selection was from the North Beach side, coffee from Caffe Trieste, brewed, I might add, from properly roasted beans.

Of my Asian choices, the winner by default was The Pot Sticker's Cold House Noodles, pictured at the top of this post. I say "by default" because, regrettably, the event is not a favorable venue for hot noodles, which should go directly from the wok or cooking pot to the plate (or paper boat) to the gullet, not prepared in advance and kept lukewarm in chafing dishes. The cold noodles also got an assist from the bright sun and near-80s temperature, whic made their cool spiciness and blend of textures all the more welcome. The Shanghai noodles from Bund Shanghai also made a valiant effort to satisfy, almost savory enough to work as a cold noodle dish, and a texture that held up well to the storage. (These, I should mention, were not the fat Shanghai cu mian, despite the name, but more of a la mian thickness.) The Thai rice noodle dish at least provided some protein, with generous chunks of chicken, but was bland overall, while the poor Mee Goreng didn't stand a chance and came across as a mushy mess.

Although it takes quite a bit of imagination to imagine how most of the noodle dishes would fare freshly cooked and immediately served, there's some residual value in having so many examples side by side for comparison. I became fully aware of the Nort Beach - Chinatown Noodle Fest's shortcomings last year, but still found it worth returning to.