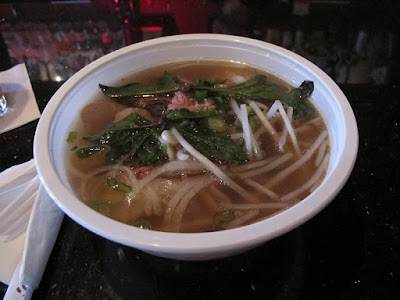 Dädä, a congenial bar in the Financial District with some decent beers on tap, recently began hosting Hung Lam, a. k. a. Soup Junkie, at a Friday pop-up, which provided me with a convenient opportunity to check out Lam's pho. Arriving just after noon for the inaugural event, I was surprised at how uncrowded it was.  Either the news of Soup Junkie's transcendent bun rieu hadn't reached the FiDi, or the event didn't get enough advance publicity.  In any event, it was walk in, place your order, have your soup ladled out into a plastic bowl, and grab a seat, all within the space of a minute or so.  I found a seat at the bar, ordered a pint of Widmer Drop Top Amber ($4, the special of the day) and tucked into my bowl of $10 beef pho, described on Soup Junkie's website as "Beef noodle soup topped with braised beef brisket, sliced beef, beef meatballs, onions, fresh herbs, and fresh rice noodles." 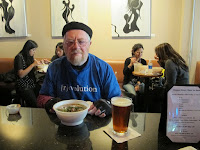 The fresh rice noodles in the soup were of the medium wide variety, which I like, but a little softer than I prefer, which might have been a result of the, er, soup line service. The sliced beef in the topping appeared fresh, and the meatballs were toothsome. If I could fault anything in the toppings it would be that they seemed a bit skimpy in my bowl, especially compared to the bounty of protein provided with Lam's incomparable bun rieu. The star of this soup was the broth. It was slightly less minty/medicine-y than you might find in a pho, but surprisingly deep, complex and pleasantly fatty with a slight touch of sweetness. You might think of it as a beefy yet considerably refined analogue to a tonkotsu broth, one that didn't kill you with salt. Overall, it was a solid bowl of noodles, though it didn't reach the heights of the Soup Junkie bun rieu I had at a Vinyl Bar pop-up. Both the bun rieu and the pho were being served at the same price at Dädä; if you've never tried either, go  for the crabby one.

My beer selection was based not only on the price, but on my perceived need for a break from the forest of über-hopped IPA's out there. (Now there's an appropriate use for an umlaut.) In retrospect, it was a poor choice, because the Amber Ale had a marked sweetness to which ganged up withe the slight sweetness ot the pho broth to produce a cloying effect. A crisp, hoppy IPA, by comparison, would have provided a nice counterpoint.