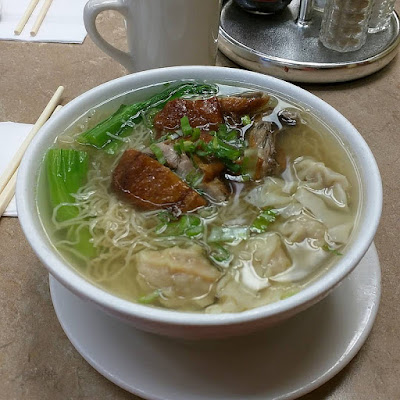 I was tiring of stratospheric noodle prices like $16 for chicken ramen at the latest name-dropper ramen-ya or $14 for a bowl of Taiwanese beef noodle soup at China Live (where they raised the price two bucks after I convinced them to add more broth to the bowl), so I decided it was time to return to more proletarian-priced renditions of The People's Food. Where to begin?

I have the bad habit of ignoring places in my own back yard, but a couple of metaphorical taps on the shoulder sent me to Yin Du Wonton Noodle on  Pacific Avenue, which I hadn't been to since it replaced a middling walk-away dim sum shop four years ago. The first nudge was its inclusion in a sina.com  article recommending an array of Bay Area noodle joints, and the second was my reaction to an attractive picture on Yelp showing duck wonton noodles at Yin Du.  As you know, "Duck" is my middle name. 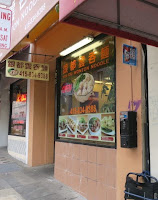 My #9 Roast Duck Wonton Noodles included about five five irregularly-shaped, bony pieces of duck flesh, not the neat, thicker slices found in some of the Yelp photos (perhaps because it was late in the day). There was enough skin to add a duck-fat sheen to the broth, but not enough meat to add any ducky intensity to it. The broth, which came a couple of shades hotter than lukewarm, was overall on the bland side, so I used a little soy sauce and black pepper to kick it up, as no other suitable condiments were available. The wontons were the best feature: plump, with some shrimp crunchiness, The noodles were ample in quantity, but as I've written before, I'm not fond of the traditional fine "dragon's beard" noodles, which make me feel like I'm chewing on someone's hair. I think there was an option for substituting fun noodles, but I generally try to stick to traditional forms the first time around.

I probably could have gotten a more sumptuous and well-endowed bowl of wonton noodles for a bit more at ABC or Washington Bakery a couple of blocks over, and pound-for-pound my bowl of wonton noodles at Yin Du brought nowhere near the gut-busting value of Chonqing Xiao Mian's $7.95 namesake noodles around the corner on Kearny St., but at $5.75 before T & T it was probably the cheapest bowl of noodles I will have all year. 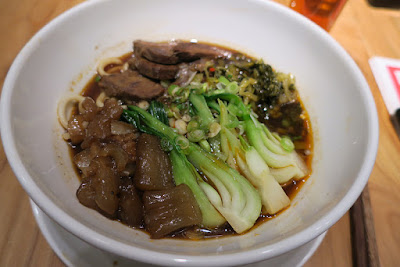 China Live is basically in my neighborhood, so I couldn't resist stopping by to visit the grand opening, and once inside, to vet their only noodle soup offering, Taipei Braised Beef Noodle Soup

A couple of caveats here, including the obvious: it was China Live's first night open to the public, without even a a soft opening other than a single benefit preview event, and thus it would be unfair to hold the restaurant to any standard of perfection.  In addition, I can't claim to be a good judge of Taiwanese beef noodle soups, having had fewer than a dozen versions so identified, though I have a fair grounding in Chinese beef noodle soups generally, going back to my first bowl at California Beef Noodle King USA in Shanghai 25 years ago.

Since I arrived at the opening bell, I had no trouble getting a seat at a two-top table in the large, warren-like dining area (though it was quite the scrum by the time I left). All of the cooking stations were in operation, though there was only table service, i.e. no service to bar stool seats at the counters surrounding each station. (This may be SOP at dinner, as one is likely to order from multiple stations at that time.) I ordered the above-mentioned beef noodle soup, a side of shengjian bao, and a glass of the house "China Live" beer formulated by Marin Brewing Company.

"Taipei Braised Beef Noodle Soup - Brisket/tendon, Red Broth" as it is described on the menu is one of many varieties of "Taiwanese" beef noodle soups (a Taiwan-published cookbook I have lists 20). It weighs in $12 a bowl; in light of the understandable priciness of the China Live venue, this seem almost an absolute bargain to those of us sadly inured to double-digit noodle soup prices by trendy ramen joints.

Overall, I would pronounce my bowl of beef noodles at China live a success, with some correctable (and maybe even overlookable) flaws. The good news is that they seem to have the hard parts down -- good broth, chewy noodles and mouthwatering beef.  The broth was deep, rich and beefy, without medicinal or, somewhat surprisingly, very noticeable star anise overtones. It was savory enough nonetheless. The medium-thickness wheat noodles were pleasingly al dente with a little snap to them, just the way I prefer, and the beef was fall-apart tender but....

The major fault I found with my bowl of soup was the noodle-to-soup ratio, or, should I say, the soup-to-noodle ration. There was a respectable serving of noodles in my bowl, but a serious (IMHO) lack of broth; it's a soup dish after all, not a semi-dry noodle offering.  Another failing, less serious, was that the tendon appeared to have been cooked too long, perhaps in search of a guilao-friendly consistency. To me it was too jelly-like, and lacking a satisfying chewiness, But different strokes...

Lastly, not really a flaw but irksome to me, was the way the brisket was cut -- uniformly sliced across the grain, like so many pieces of chashu atop some ramen noodles. I would have preferred larger, irregular hunks. But then again, there wasn't enough broth for them to lurk in.

As for the shengjian bao? They were pricey at $9 for four pieces and, to use an Irish bull, weren't as good as I expected, but I didn't expect they would be.  They were nicely browned on one side, and had a good texture, partly chewy and partly soft-shelled, but the filling lacked flavor and grease. Unlike xiao long bao, the "soup" in shengjian bao should have less collagen and more fat, but in the Bay Area we are just too damn health conscious. In Shanghai, when I eat sanji mantou, as the locals call them, I'm aware I am throwing nutritional caution to the wind; why can't I cut loose here once in a while?

Finally, My China Live Beer ($7 for a 10 oz, glass) was crisp and refreshing, a bit like an amber ale and more tart than hoppy, greatly appreciated by us non-IPA lovers.