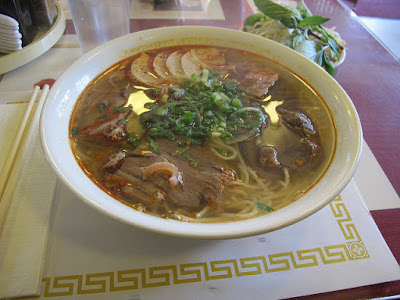 My liking for the tremendous variety of noodle dishes at San Sun notwithstanding, I've long felt that the venerable Golden Flower on Jackson Street was the best option in San Francisco's Chinatown for straight up pho. For one thing, unlike some of their newer rivals who use pre-packaged soup bases, they make their broths from scratch, grinding their own spices the old-fashioned way.  Not long ago they added bún bò Huế to their menu.  This is the spicier cousin of pho, and a specialty of the city of Hue (where it's just called "bun bo"). With the chill of Winter in the air, it's what I wanted.

My bun bo Hue was served in a washbasin-sized bowl, broader but shallower than a typical bowl of pho.  Its toppings included generous quantities of pork pate, crosscut beef shank slices (often mistakenly misnamed on menus as "beef tendon") and one or two leaner cuts of beef, possibly oxtail and loin. It was moderately spicy (default for guilaos?) and the noodles were on the soft side of firm, a little disappointing in this respect.  The lemongrass-ey broth had good depth, apparent even through the chili spicing.  Condiments served on the side included Bay leaf, lime wedges, sliced fresh jalapeno, and mung bean sprouts.

Although I would have preferred the noodles a bit firmer, I had no trouble downing the whole bowl; overall it hit the spot on  a brisk day.