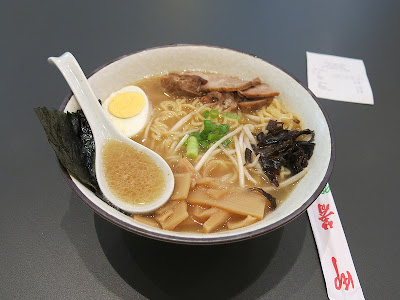 A bed-check stroll through Little Saigon on Larkin St. (confirming two new Vietnamese restaurants in the offing) brought me to the front door of the Asian Art Museum. It was the first day of a new featured exhibition, Japanese Art From The Larry Ellison Collection, so I went in thirsting for art and noodles. Given the nature of the current featured exhibition, the Museum's Cafe Asia, with Chef Melinda Quirino's pan-Asian culinary capabiities,  was certain to have ramen on the menu, and so it did, "Tokyo" Ramen, for $13.00.  Pricey, I thought, but in support  of a good cause, so I went for it; after all, with my Senior membership and frequent visits, I'm a turnip the AAM doesn't get much blood from.

I put quotes around the "Tokyo" in the AAM's menu listing of Tokyo Ramen, because to me, Tokyo Ramen implies a shoyu broth and today's ramen appeared to be miso-based (possibly with a bit of pork bone fortification).  It was a forthright if not particularly complex broth that I enjoyed. The noodles were of the thin, curly style, and cooked hard the way I like. The chashu was on the dry side, and a bit meager in quantity for the price.  If there was anything they didn't stint on, it was the noodles, really too many for the bowl, like a built-in kaedama.  Overall, it was a brave attempt, but Cafe Asia won't be confused for a ramen-ya any time soon. 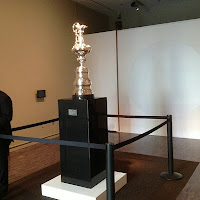 I never got around to my first look at the Ellison exhibition (which will be around until September, in any event). While I was slurping down my ramen, my iPad burped out a news flash: the 9th District Court had lifted the stay on same-sex marriages in California, and they would be resuming at San Francisco City Hall, a mere block from where I sat, in half an hour. I decided to postpone the Ellison and go observe the frivolities and media frenzy at City Hall. After all, I had been married there myself (albeit to a person of the opposite sex) back in 1966. But I did pause to take a gander at the America's Cup, briefly on display at the AAM.

Turtle Tower Adds A Level To Its Restaurant, And I Add A Level Of Enjoyment To My Pho Ga 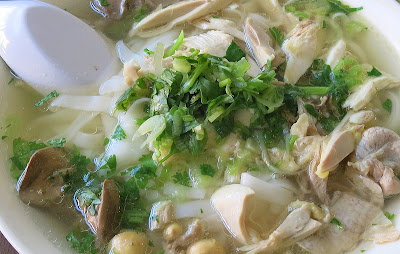 Back in February, I rang out the tenure of Turtle Tower Restaurant in its original Larkin St. location with a ceremonial bowl of TT's iconic pho ga (chicken soup). It recently re-opened in its new digs a couple of doors up the street from its old location, and today I got around to ringing in its return.  While the new Turtle Tower venue doesn't quite tower over the old one, it has literally raised itself up a level, adding an upstairs dining area, so I raised the level of my chicken pho a level, ordering it with giblets, a dish known as phở gà lòng. 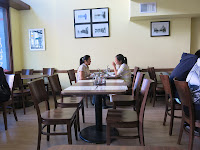 On my grandparent's farm, my grandma liked to serve visitors a dish she called chicken and giblets, as if a giblet were a separate creature from a chicken.  When I was very young, I think I even believed in creatures called giblets (probably punked by my two older sisters in this regard). As far as pho ga long is concerned, they might as well exist as separate creatures, since the addition of giblets to the chicken pho brings a dramatic new dimension to it. The gaminess of the giblets adds an entire layer of flavor onto the unctuousness of the chicken flesh; likewise, the extra chewiness of the giblets greatly expands the whole range of textures in the satisfying bowl. I don't know what took me so long to discover this, as I  have no fear of offal, but I cannot conceive of ever ordering pho ga  again without the giblets.

The relocated Turtle Tower Restaurant, seen below with a blue facade, has yet to have a sign erected to identify it, but needless to say its legion of regulars have no trouble finding it.

And Now For Something Completely Different: White Peach Laksa from Azalina's Malaysian 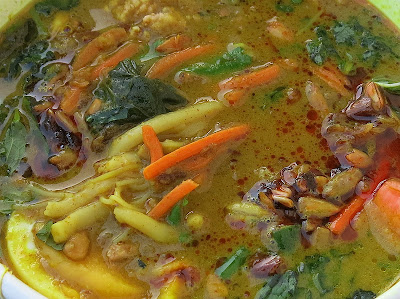 I've blogged here and elsewhere in the past about Azalina Eusope's excellent Penang-style Malaysian food offerings, including savory laksas.  Her Azalina's Malaysian stall is one of the things that keeps me returning to Off The Grid's Friday night Fort Mason Center events. 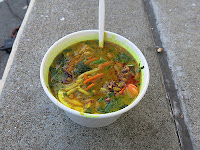 Azalina inherited a legacy of five generations of street food vending, but in addition to maintaining that legacy in admirable fashion, her restless creativity  is constantly pushing her to greater levels of complexity and originality. Her White Peach Curry Laksa, which I enjoyed tonight, is a case in point.   Azalina likes to pull her own laksa noodles, and occasionally color and flavor them with various types of vegetation.  This is not unusual in itself, but what is unusual, and probably unique, was her inspiration for using freshly picked California White Peaches as an ingredient. 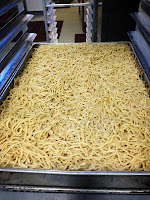 Azalina's Malaysian's White Peach Noodle Laksa, featured at Off the Grid the past two Friday nights, not only uses peach in the broth, along with lemongrass, coconut and the usual spices,  but also incorporates peach pulp in the noodles. The chief effect of this, according to Azalina and supported by my own experience, is a softer, more unctuous noodle. It also undoubtedly adds to the peachy tartness of the soup, though it's difficult to tell how much of this comes from the noodle itself. But the end result was very salubrious.  I can't say I could really detect much peach flavor (and the fact that I ordered my laksa extra spicy probably didn't help) but the extra tartness was palpable, and had the salubrious effect of neutering any potential cloying sweetness from the coconut, making for a wonderfully delicious bowl of laksa.

Hello Kitakata! Karamiso Ramen At Tanpopo Is A Chewy Delight 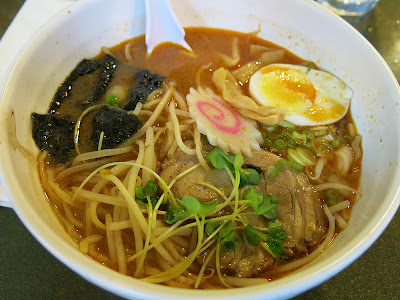 I went to Japantown today for something called the "Northern California Soy and Tofu Festival" (and we've got to liberate that event from the priestly castes!). Crossing the  Buchanan Street Mall I noticed the big yellow banners proclaiming "Kitakata Ramen" in front of the venerable (and fortuitously named) Tanpopo Restaurant.  It was a term I'd heard before, and I wondered if Tanpopo was pushing a regional ramen riff to help it stand out in the increasingly competitive Bay Area ramen-ya world.  None of the Tofu Festival offerings had tempted me (why can't they have stinky tofu?) and I was hungry, so I decided to check out the Kitakata ramen at Tanpopo. 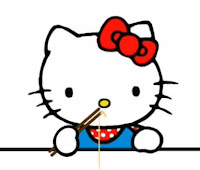 Tanpopo was slammed at that hour, but I managed to get a seat at the long counter and pretended to study the menu, though I thought I knew what I wanted -- Kitakata ramen. When the server appeared to take my order, I asked about the Kitakata ramen. "It's in all our ramen," she said.  Suddenly having to make a snap decision, I requested the generally fail-safe Karamiso (spicy miso) ramen. (I've always found miso the most forgiving of the Big Three ramen broths, and a decent spiciness can cover a multitude of sins.)

It turns out that "Kitakata" can either designate the regional soup style of the City of Kitakata, or simply the particular type of noodle associated with that soup style, and Tanpopo was using the term in the latter sense.  According to the Rameniac blog, Kitakata ramen features


"...a noodle made largely from mountain spring water. A significant amount of water is added to the noodle, which shapes up flat, wide, and curled. A tactile sensation of slurping and the chewiness are the key features of Kitakata ramen noodles." 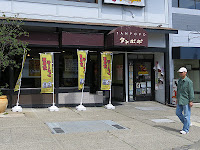 When my ramen came, the noodles weren't particularly flat or wide, though I'd say they were slightly larger (and perhaps a bit more squarish in cross-section than standard ramen noodles). They were, however, gloriously chewy; they had an assertive presence which I had seldom, if ever, found in a ramen noodle.  It was a presence that is found in the best of Chinese noodles, and which in large part makes me a noodle lover, and it lasted to the bottom of the bowl. There was also a generous portion of noodles and toppings (except for the chashu, which was one thin slice) and the spiciness was at a forthright, sinus-clearing level.

Tanpopo is a hectic but cheerful venue which fits my imaginary picture of what a popular ramen-ya should be like, and has a long and varied menu of both ramen and sides. I'll be back.