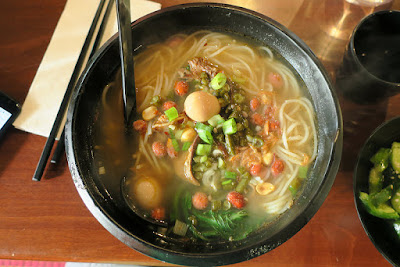 I headed out to Pot & Noodle for Round 2 (Vetting of the Sichuan Soba) but found them closed for some sort of maintenance (installation of the noodle machines, perhaps). A hand-written sign outside (in Chinese, but I knew what it said) directed me to sister restaurant Chong Qing Xiao Mian around  the corner, where I was lucky to find a seat at the communal table at 6:30 in the evening.

CQXM doesn't have Sichuan Soba on the menu, so I opted for the Guilin Rice Noodle Soup.  I hadn't had Guilen mifen since my last trip to Classic Guilin Rice Noodles in Oakland; in fact I hadn't even ventured out to my favorite Guilin mifen guan on my recent trip to Shanghai.  There was also a mystery to be solved, too.  The Wu-Du chain (see me last post) tends to cut and paste the picture menus between their stores, and the depiction of Guilin Rice Noodle Soup specifies that it is served with beef, peanuts and quail eggs. However, a fellow noodle maven had just tried the version at Pot & Noodle and reported it had pork and a tea egg instead of beef and quail eggs.  What would I be getting? 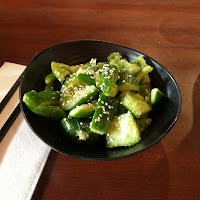 My Guilin Rice Noodle Soup  arrived, with (voila!) beef an quail eggs.  The beef was, I believe, beef plate (the cut with the white membrane you'll usually find in what the Cantonese call "beef stew" noodle soup). The beef was tender, even the membrane, which can sometimes be too chewy. The (2) quail eggs were masterfully cooked, as good as any ramen joint onsen egg, with fully-cooked but silky whites and runny yolks inside. (I found myself trying to picture a tiny egg timer).  The rice noodles, unfortunately, were a little on the soft side, and the soup, while a nice meaty broth, was not as interesting as the milder but more complex, slightly medicinal traditional broth served at Classic Guilin Rice Noodles across the bridge in Oakland.

With my noodles, I ordered a  cucumber salad appetizer.  The cucumber chunks in a slightly spicy "vinaigrette" coated with sesame seeds made for a less complex version of this dish than found at other Northern Chinese restaurants in town, but was very refreshing and one I will order again.

Pot & Noodle, which just opened in the Jackson St. space vacated by ABC Bakery and Cafe, is the eighth Sichuan-styled restaurant venture (including the now-closed Pot Sticker) by Jiayi (Jenny) Wu and Ziwen (Truman) Du, who met when she was a server and he a chef at Z&Y Restaurant across the street.

Although the noodle-centric menu is similar to their other restaurants, including two in Chinatown (Spicy King and Chong Qing Xiao Mian), Pot & Noodle provides additional benefits both on the retail side and the chain's operational side.  For its potential customers, Pot & Noodle hooks into a couple of recent fads, offering $16.95 "Mini Hot Pot" options (hence the name) as well as a fresh juice bar.  From the operations standpoint, the new facility offered up a spacious basement. Wu and Du will use this space to install state-of-the-art noodle making machines which they ordered from China. Pot & Noodle will, thereupon, become a central noodle-making kitchen for the whole chain. It's likely too that Pot & Noodle will capture overflow patronage from its sister restaurant Chong Qing Xiao Mian around the corner on Kearny St., which is usually slammed at meal time.

The Chinese name of Pot & Noodle is Chong Qing Xiao Mian, identical to the Kearny St. facility's name, but since I had already reviewed the namesake noodle dish at the latter, I decided to try the "Wuhan Hot Dry Noodle" (reganmian).  It was the first Stateside version of this dish I have had, and the first since before I began blogging, so I have nothing within memory to compare it with.

Time Out Beijing has provided a pragmatic description of reganmian, which can have many variants in toppings:


As far as Chinese food-lore is concerned, regan mian (热干面) is relatively straightforward, avoiding the customary historical quagmire that usually accompanies iconic dishes of Chinese cuisine. Regan mian, or 'hot dry noodles', unequivocally hails from Hubei's capital Wuhan... There is some local variation, of course, but all regan mian can be divided into three parts: freshly cooked wheaten noodles, pickled carrot and occasionally minced pork, and a thick sesame paste-based sauce. The sauce can either be drizzled over and tossed with the noodles or allowed to pool in the bowl for the diner to mix.

My meatless reganmian came with a minimum of carrots (which was fine with me) and a plenitude of scallions (ditto); and, as a local variation, apparently, whole peanuts. the sesame paste was very viscous, perhaps too viscous, as the noodles, though properly cooked, tended to clump together even after a very vigorous mixing, courtesy my server.  It was a huge portion (an attribute Wu-Du restaurants are known for) for $7.95 and tasty, if not particularly spicy (nor was it expected to be, not being a Sichuan dish).

I chose Couple's Delight (fu qi fei pian) as an appetizer. Though not as elegantly thinly sliced as the version at Z & Y across the street, it seemed meatier, with a higher ratio of beef (flank?) to offal.  It was nicely balanced between ma (numbing) and la (spicy) and also saucier than other versions I've had.  This proved to be a side benefit, as I doled some of the excess sauce into my noodles which helped separate them while adding some zing.  Like the noodles, it was an absolute steal at $4.95.