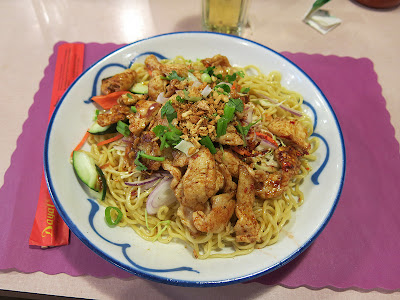 With gentrification of the Mission marching on -- a Nicaraguan restaurant of 30+ years standing was just replaced by a yuppie sandwich, sausage and beer place -- I decided, in a moment of panic, to trek to the Mission to do a bed check on an even rarer gem, the Burmese hole-in-the-wall known as Yamo. Thankfully, due perhaps to its location in the less desirable, more bombed-out northern end of the Mission, its shoebox configuration (difficult to do much with that tiny space) and its strategy of aggressive affordability, Yamo appears to be dug in and thriving.

Yamo is indeed a tiny place, with no tables and approximately 10 seats at a counter that runs front to back. Behind the counter were five(!) women involved in the prepping and cooking for about half a dozen mid-afternoon customers when I arrived. This may seem like overkill, but by dinnertime all would be frantically busy with lines of customers waiting for seats, and separate lines of customers waiting for takeout. The attraction? Tasty food, large portions and nothing over $6 on the menu.

It was a warm day in the Mission and steamy hot inside Yamo, so I abandoned my intention of checking out the current state of the house mohinga or khao swè and settled on something listed on the menu as Yamo Cold Noodles. These were described as "cold noodles mixed with house special flavor, onions, cabbage, cucumbers, and chicken." (In Burmese this would be "kyat tha khauk swe' thouk, or chicken noodle salad.

There were, in fact, both red onions and green onion tops; crushed peanuts, dried garlic, carrots, cilantro and a sauce that was slightly sweet and slightly spicy contributed to the "house special flavor."  A generous amount of freshly cooked chicken chunks crowned the affair.  The chicken was still hot from the pot and the "cold" noodle dish was a mixture of hot and cold, crunchy and tender textures, and sharp and mellow flavors, with a refreshing end result.

The bite for this was $6.00, tax included. I requested hot tea, and was given a green tea teabag and a tumbler of hot water, gratis. Yamo may not quite be Burmese Kitchen of Burma Superstar, but with a value-to-price ratio like this, it's no wonder they have to beat off customers with a stick. 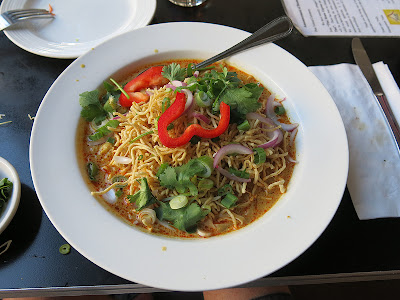 I haven't been noodling much lately, other than noshing home noodles, while I've been busy reviving my other blog and reminding myself that there are good eats to discover from here in my own hemisphere.  Enough of depriving myself, I said to myself today, when the hands of fate* brought me to Thai House Express, er, I mean House of Thai.

For some reason, Thai House Express recently changed its name to House of Thai. There's been no change in management, or the food, or anything else, we are assured by an announcement taped to each table. Perhaps it finally dawned on them that "Thai House Express" sounds a little like dumbed-down mall food, when in fact THE (now HoT) is one of the best casual Thai sit-downers anywhere. "House of Thai" does make is sound a little more grownup, but it's as lamestream a name for a Thai restaurant as I could imagine.  Thankfully, there's the food. 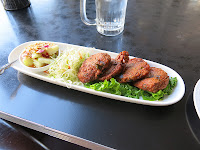 I went for the khao soi, and a side order of tod mum pla (fried fish cakes) for added protein. Khao soi is the northern Thai version of the Burmese Ohn No Khao Swè (see earlier post). It's halfway between a noodle soup and a "dry" noodle dish, and features a coconut-infused curry-like broth. (For what it's worth, it's listed under the "noodles" section of the menu, not under the "noodle soups" section.)  The Thai version served at House of Thai includes tender chicken chunks with flat boiled wheat noodles in the broth/curry, topped with crispy fried noodles. Onions, shallots, chiles, and cilantro also have a prominent presence, as can be seen in the photo above, and pickled cabbage seemed to be lurking in the yellow broth as well. The broth is coconut-y enough to be comforting, but sneaky-spicy enough to let you know you're not being coddled, and the crunchy deep-fried egg noodles atop the melange contributes to a nice mix of textures.  Like anything else I try at Thai House Express, I mean House of Thai, it's worth returning for,

*I'm working on photo-documentation of the former locations of branches of the Foster's Cafeteria chain, and have discovered that one location (which I wasn't familiar with at the time) was at 901 Larkin St., which happens to be the location of House of Thai today.
Posted by Gary Soup at 9:47 PM 0 comments

Teaching Your Pre-schoolers About Ramen (There's An App For That, With Your Help)

Along with sex education, gun safety, and the wisdom of not talking to strangers, you'll want your kid to know about ramen, won't you? There's an app for that. Or will be, if  a group of Torontonians hoping to produce an instructional app for pre-schoolers called Ramen Party, along with a companion e-book series, reach their funding goal on Indiegogo.

I kicked in $25, not only so I wouldn't feel guilty about using this video and to get a cool tote bag, but also because I would would want my kid to know his shio from his shoyu, be able to tell the nice serving lady in the school cafeteria to go easy on the negi, and, above all know about kae-dama* after a hard morning of slogging through the Toronto snowdrifts. Why not do the same?