Pad Thai from the Hos at Off the Grid: Fort Mason Center 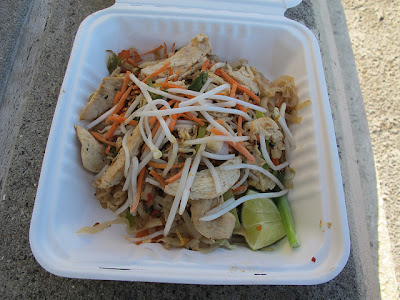 When the House of Siam restaurant decided to branch out with a food truck name House of Siam on Wheels, they may or may not have realized what they were doing when they abbreviated the truck's name to "hosonwheels" for its domain name and Twitter feed. At the very least they earned themselves some smiles, and most likely increased their exposure at any venue, since HOS veterans are fond of pointing out the tee-hee name to their friends. 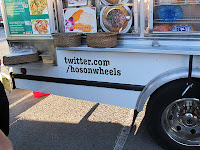 When sniffing around Off the Grid: Fort Mason Center tonight for something new (it gets harder after the 68 visits to this venue Foursquare says I've made) I realized that I had never tried House of Siam on Wheels' Pad Thai, so I went for a bowl, er, box of it.  The streamlined Pad Thai we're accustomed to in the US is comfort food at best, but at least it isn't mac n' cheese. From House of Siam's reputation (and what I'd tried of their fare in the past) I expected a serviceable helping of dressed-up noodles, and that what I got.  The noodles were perhaps the best part, just tender enough and blissfully not too dry (which unfortunately couldn't be said of the chunks of chicken breast it was topped with).  The bean sprouts were fresh and crisp, but there was only a mere soupçon of more exotic add-ins and "spicy" as requested was not spicy at all. Overall, I preferred the version of Pad Thai I had from the Phat Thai truck on another occasion, though I did not feel cheated by the quantity and quality of the HOS' version.