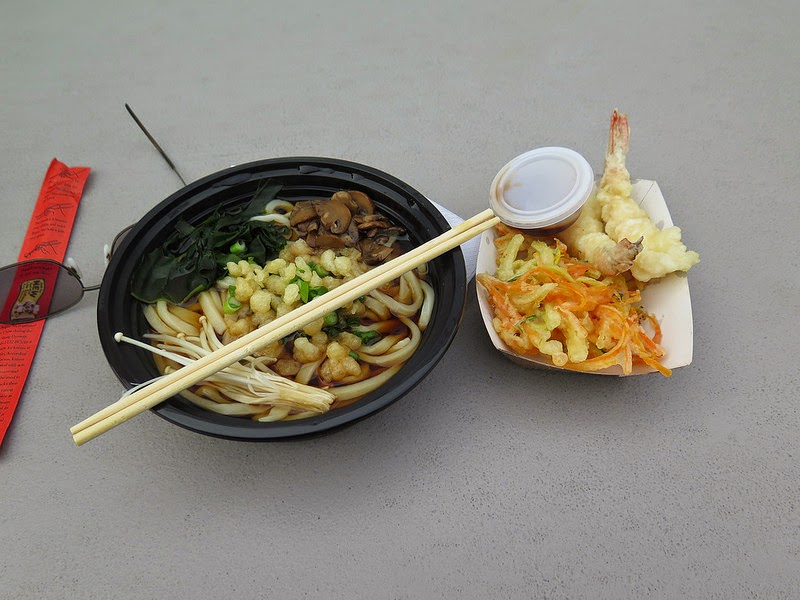 With the proliferation of mobile food venues in San Francisco, it's easy to overlook smaller new ones like the Duboce Truck Stop and its three to four vendors that opened at 55 Duboce Ave. in early November.  It's also easy to overlook vendors that nest in them, but a food truck (full-size trailer, actually) promising fresh-made udon cannot hide its light from me under that bushel for long.

I first got wind of Odang Udon in early December, actually, and made an abortive attempt to sample its wares then, only to be thwarted when they closed before I arrived shortly after two o'clock.  I was sent into a tizzy because the host venue, Duboce Truck Stop, is nominally open until 3:00, and I left, licking my wounds. Odang's nonchalance re my feeding schedule, however, far from putting it permanently on my shit list, earned it the distinction of being the subject of my first original report for 2015. 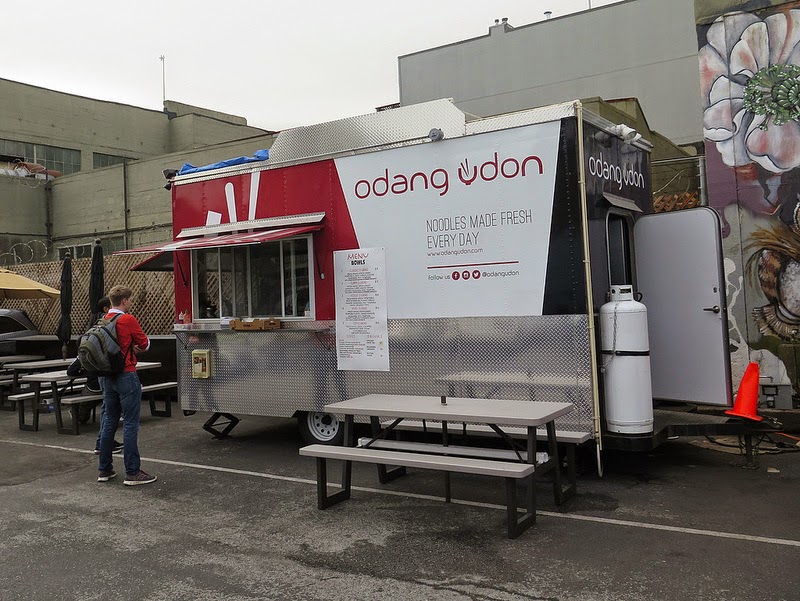 I arrived with bells on (well, one-ish) today and found Odang Udon open with its entire menu available. Five separate udon bowls are offered: "Classic O-dang," "Curry O-dang," "Veggie O-dang," "Miso O-dang" and "City O-dang," the last being their fully-loaded option. Prices range from $8.00 for the Classic to $12 for the monster bowl, and various sides and add-ins are available. Odang's noodles are made fresh daily, with the dough mixed at a separate commissary and the pressing and slicing done as needed on-board the truck by a Yamato udon machine.

I ordered the "Classic" (as a benchmark, of sorts). Per Odang Udon's menu, the Classic bowl is "Fresh-made udon, dashi, tempura flakes, green onions, and seasonal vegetable tempura."  Two types of mushrooms and some greens were also included in the toppings. I also ordered the shrimp tempura add-in, $3.00 extra. 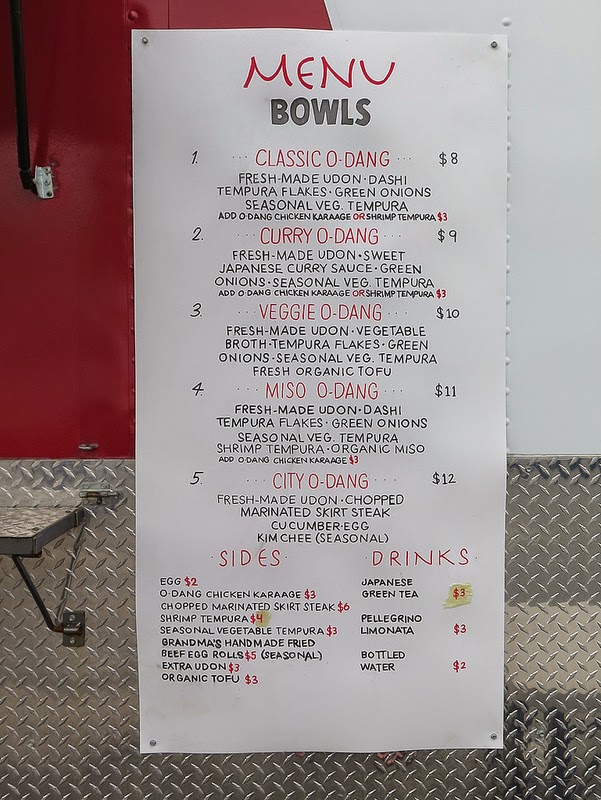 I found the tempura (both the included veggie and the shrimp) a little limp and cold, even though they were served on the side. They may have been made ahead of time at high noon, or perhaps were simply not forgiving of the time I took to pose them for pics on a cool, foggy day.  The broth was characteristically salty, saltier than the doctor ordered, but deep-flavored, and I took a guilty pleasure in it.  The noodles, as should be, were the star of the show. Cut flat and wide, resembling an over-sized linguine, they had the heft, bounce and chew that makes one covet fresh-made noodles.  Next time I'll skip the extraneous add-ins and go for the "extra noodles" option ($3.00). 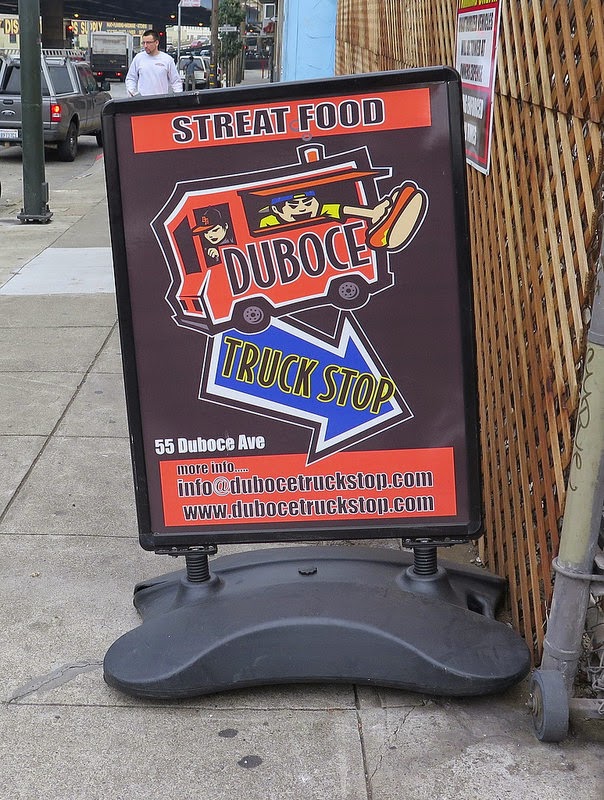 Odang Udon's current home at the Duboce Truck Stop is a little off the beaten path (Duboce and Valencia is not exactly California and Sansome) and not directly on a transit line, but worth a little detour.  If you crave a good bowl of fresh-made noodles and find your self in the vicinity of Odang, nab it.

I'm no fan of "best" lists, because they are inevitably subjective comparisons of unlike things. This pho dac biet is not better than that tonkotsu ramen, just different. I'd be blowing smoke if I came up with a "ten best noodle dishes of the year" post, but in the spirit of reviewing the past year I've ginned up a list of  10 "Memorable Noodle Experiences." Not even 10 most memorable, because then I'd have to name a couple of the restaurants twice (and I'm not talking).  Here, with links to the full reports, are 10 good ones, in chronological order.

The year began propitiously with the discovery of a new family-run Lao restaurant in The Excelsior. The Khao Poon, a.k.a. "Lao laksa"  I found less rich but cleaner than a curry laksa, with shredded carrrots and cabbage adding to an uncommon textural medley for a chicken noodle soup. 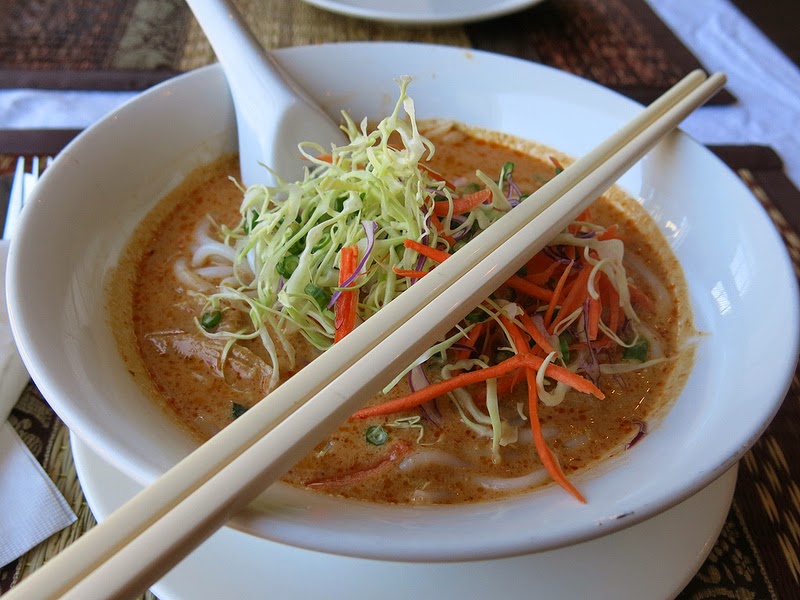 Yes, Martin Yan's M. Y. China is an upscale "gateway" restaurant, but it's a gateway to some of the best bespoke noodles around. The scissor-cut noodles created before your eyes are no exception, and if the premium you pay for them brings wild boar instead of conventional pork to the stir-fry, so much the better. 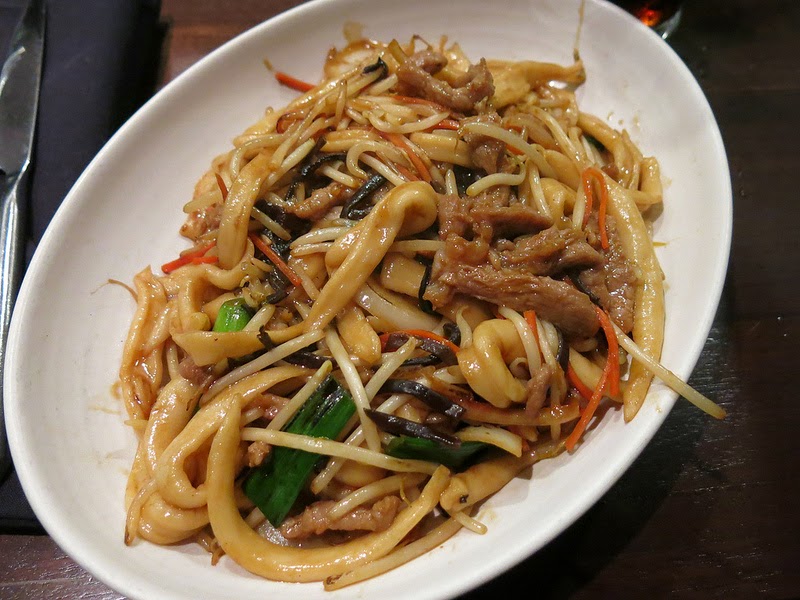 March brought what was to me the best new restaurant of 2014 in San Francisco, Terra Cotta Warrior and its array of characteristic Shaanxi noodles. It was hard to choose from among several offerings, but the Qishan Saozi Mian wins Best of Show honors  for its eccentric and complex broth, not to mention its photogenic qualities. 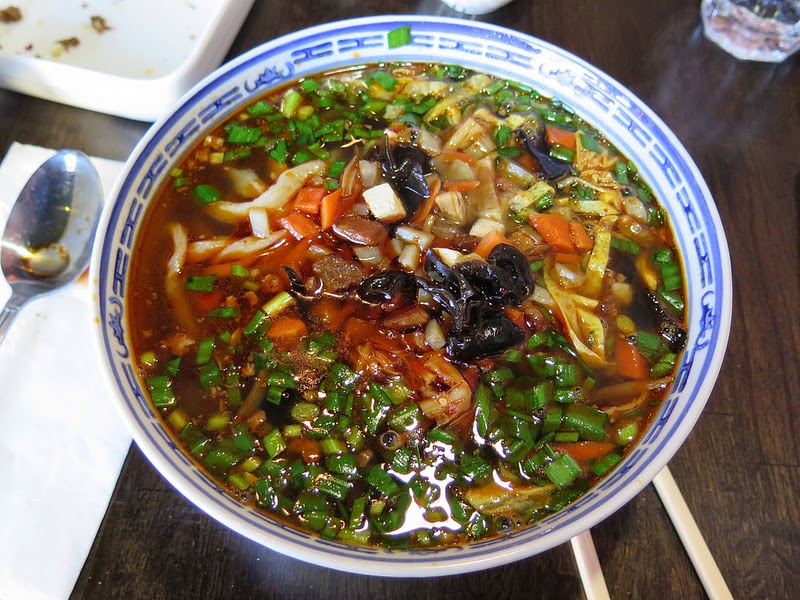 The promise of an unusual Tibetan noodle treat took me all the way to El Cerrito to Tashi Delek in March, where my own Sherpa guide, Ms. Pasang Lama served me up a tasty bowl of hand-torn rectangular noodles known as Thain Thuk. Meant to keep the nomads warm during the long Tibetan winters, it was still tasty enough on a 65° F El Cerrito day. 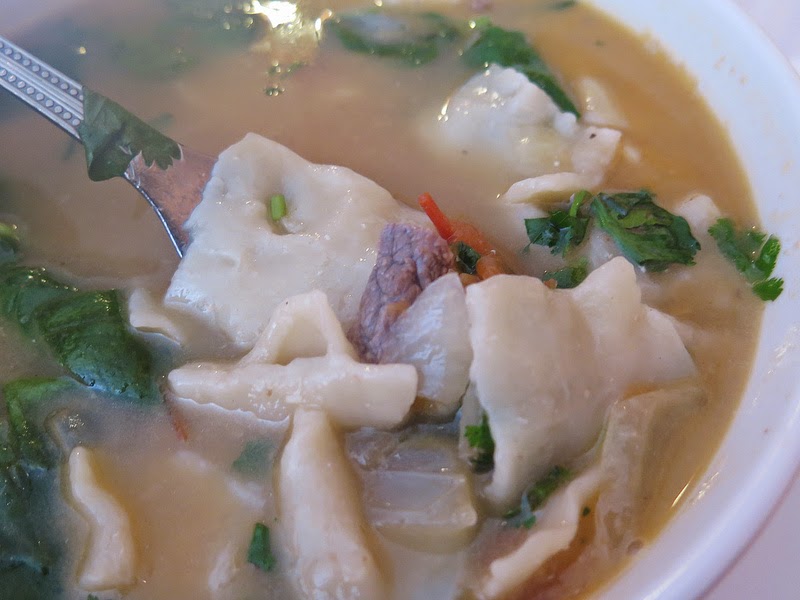 In April I visited another new kid in town, Made in China, which offers a peculiar mix of Manchurian and Hunan cuisine. I was there for an icy cold buckwheat vermicelli dish named after a street in Shenyang's Koreatown. It's actually a Chinese take the Korean dish naengmyeon, though considerably tarter. 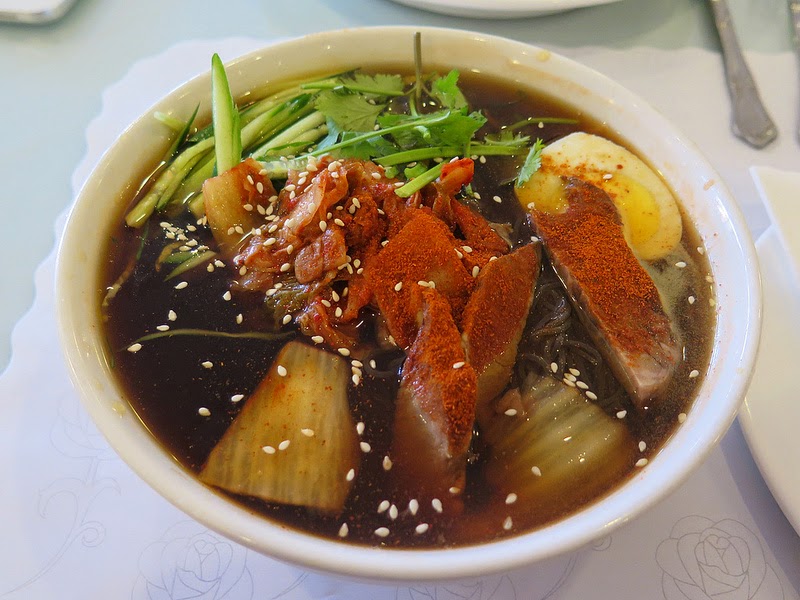 In mid-May I had a hankering for a hard-core version of Thailand's well-known tom yum, and where better to look than Zen Yai Thai of boat noodle fame. It was a boatload of protein and a symphony of flavors and textures and, yes, tom-yummy. 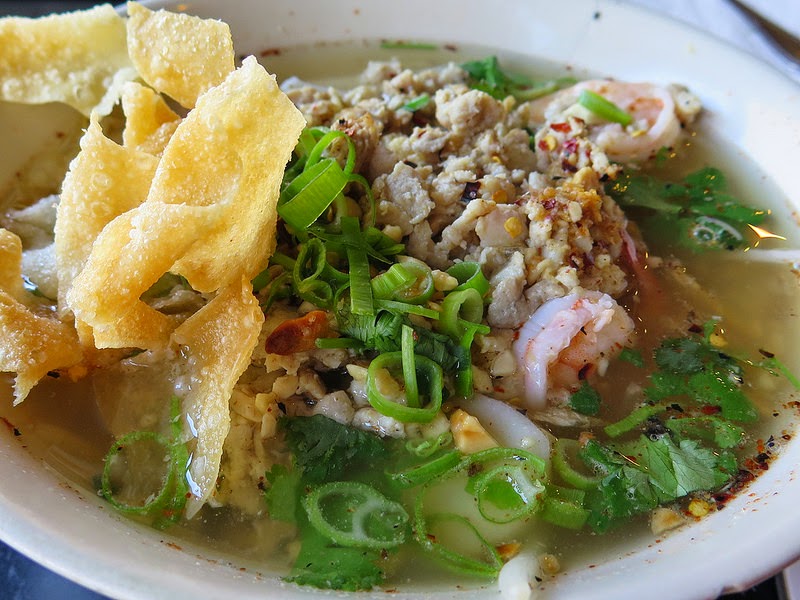 Why did I go an Oakland cocktail bar that has waitresses in slinky cut-off qipaos and private karaoke rooms in the back in June? For noodles, of course.  A reliable native Taiwanese food reviewer raved about the food, including the spciy Taiwanese beef noodle soup, and he was spot on. 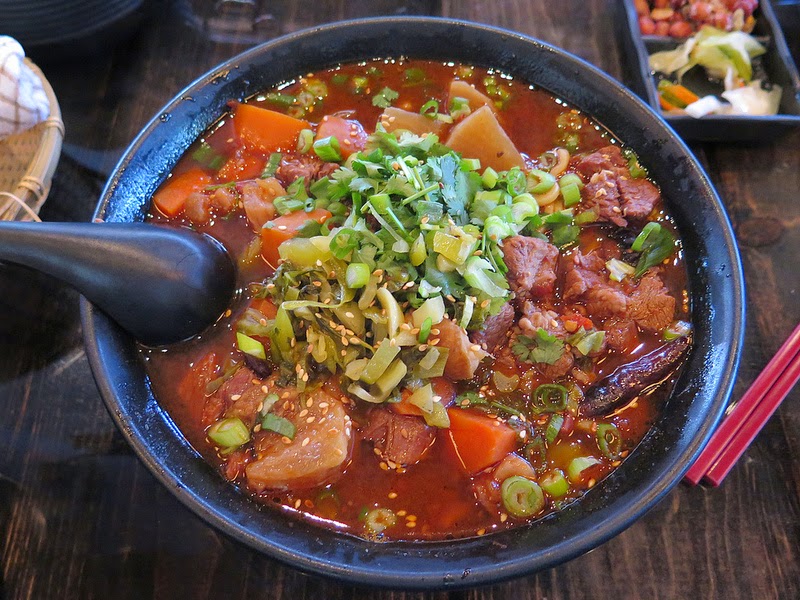 The grapevine had it that Amphawa had a good Khao Soi (true, it turned out) but the menu grabbed me first with a dish that my research revealed was available nowhere else in town, kuaytiaw Sukhothai. It was a sour, slightly sweet and very spicy soup with rice stick noodles and a pho-like medley of proteins. It's no longer "The best Thai dish you've never heard of;" I've heard of it, had it, and will never forget it. 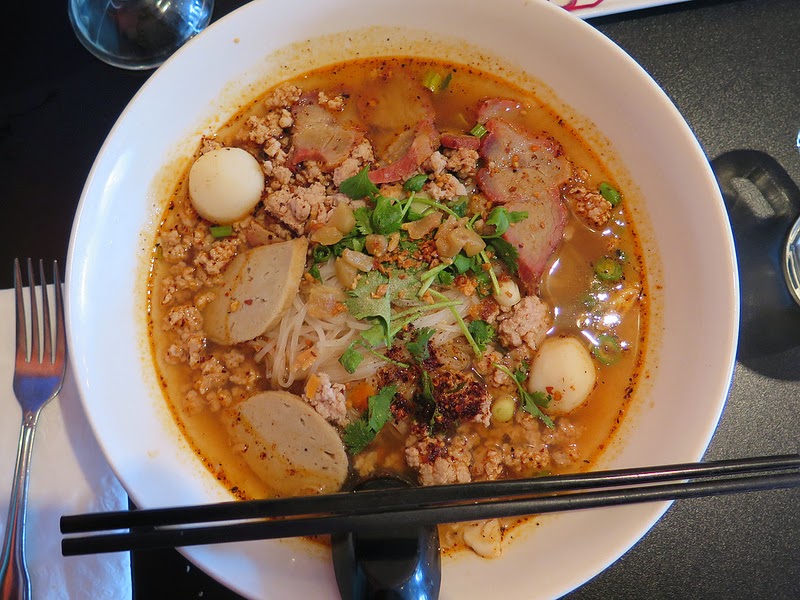 
In Autumn, Tenderloin favorite Ngoc Mai, which appeared to have shuttered, re-opened as Tuyet Mai (renamed by the young 'uns in honor of the cooking mom who is semi-retiring). I christened the re-opening with a bowl of their best-in-town bun bo Hue, making a point of insisting on the whole enchilada (as it were), including the pigs blood. Ecstatic to have it back! 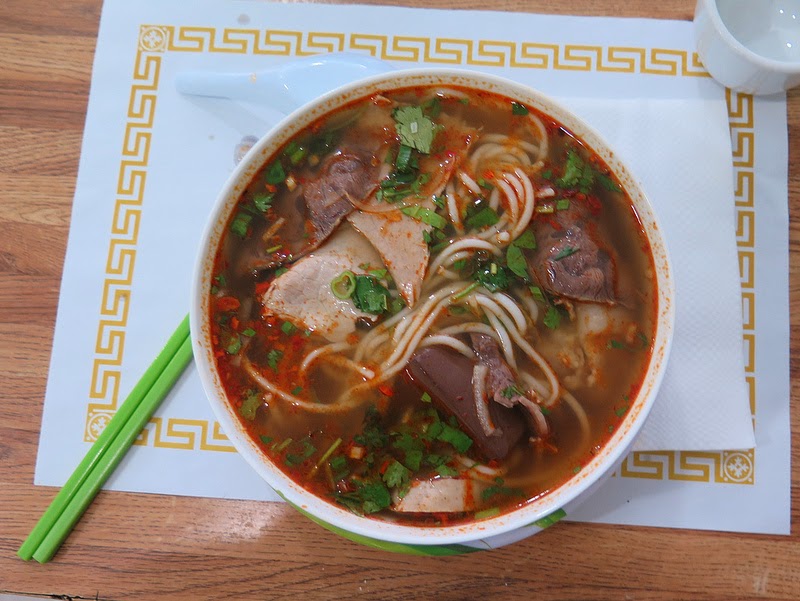 In November, Oakland's peerless Classic Guilin Rice Noodles, which had previously wowed me with its Guilin mifen and its Liuzhou Snail Noodles, lured me back through the tube for a new item on its menu, lao you fen ("old friend noodles"). A specialty of Nanning, it's know for its restorative properties. With its deep rich broth, markedly sour (from sour bamboo) and spicy.  and its veggie-dominated toppings, Old Firend Noodles made a new friend in me. 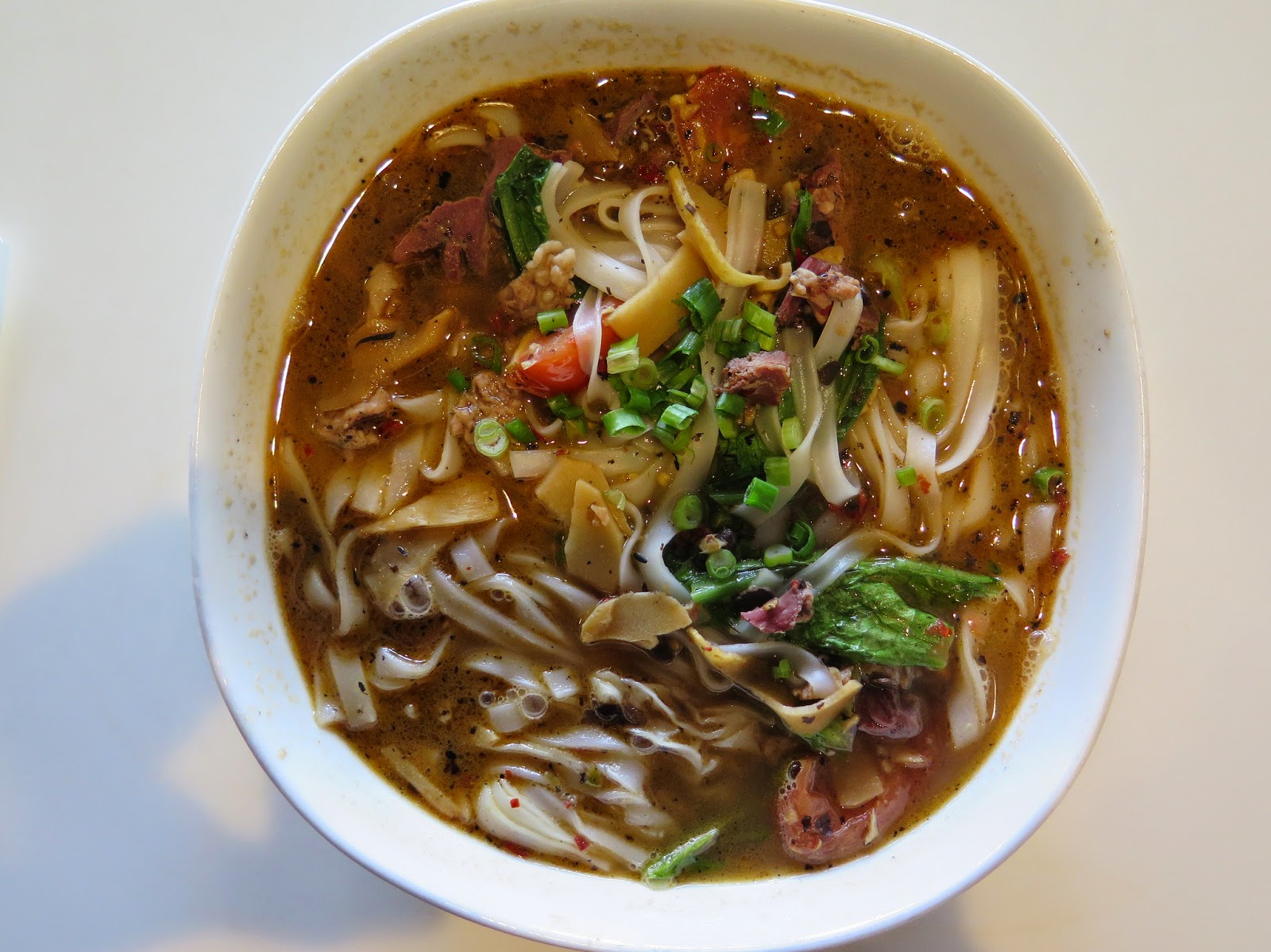