With the arrival of a branch of Japanese mega-chain Marugame Udon (990 stores, including 786 in Japan) at Stonestown Galleria, San Francisco now boasts two "self-serve" udon restaurants, including the local independent Kagawa-ya Udon at 1455 Market St. (known to some as "The Uber Building"). The "Grand Opening" of Marugame  (after a month-long "soft" opening) this week spurred me to catch up with Kagawa-ya, which had the bad taste of holding its grand opening last Spring while I was out of the country (slurping noodles in Shanghai) and atthe same time do do a quickie comparison between the two.

The two restaurants have several things in common, including, of course, "self-serve" (cafeteria-like) dining.  This involves ordering your noodle choice (and bowl size, if applicable) and sliding your tray down the track to choose additional toppings/sides (mostly of a tempura nature) while your bowl is being prepared. Kagawa-ya offers seven different bowls of udon, Marugame 10. (I won't go into udon esoterica, not even to tell you about bukkake udon, but you can learn a lot here). Both have a variety of tempura (nine for Marugame, a"variety" for Kagawa-ya -- I didn't count them) including a potato croquette  For additional sides, Marugame offers four varieties of musubi, plus inari. Kagawa-ya offers Spam musubi (reflecting the chef-owner's Hawaii origins) plus onigiri.

Both Kagaway-ya and Marugame specialize in sanuki udon (udon with a square cross-section), and both venues make them in-house. 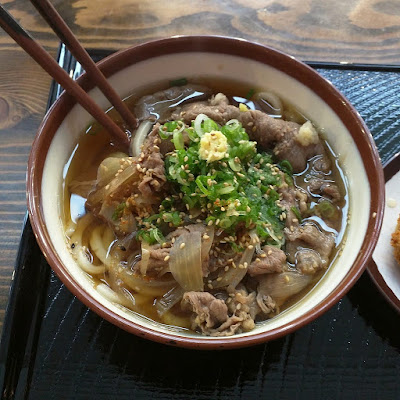 First up was Kagawa-ya. An upside of being away when it opened, is that any opening day story I might have essayed would have ended up in the long shadow cast by the prodigious coverage by Japanese-American food blogger Foohoe (Sandy Wada).  Read it and become her fan here. Note,  though, as she acknowledged, her meal was comped.

Kagawa-ya was forlornly empty when I arrived, just before 1:45 on a chilly Tuesday afternoon and placed an order for the dish I hoped would be useful for comparison with Marugame's fare, Niku (beef) Udon (described on the menu as "Soy braised sliced beef, sweet onions, green onions, ginger and toasted sesame seeds").  As my noodles were being prepared, I slid my tray down to the tempura section and picked a shrimp tempura and a potato croquette as add-ons. Somehow I missed the step where I could have had the woman behind the counter add a soft-boiled egg, which would have made my bowl more comparable to what I was contemplating ordering at Marugame. 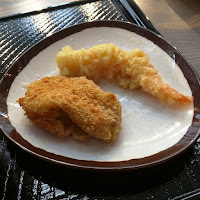 The ingredients promised by the menu came in a slightly, but not offensively, sweet (dashi?) broth, whose sweetness appeared to come from the onions.  The coarsely shredded beef was the weakest part of the dish, being overly chewy and not particularly flavorful. The restaurant's headliner, udon noodles, were nearly perfectly chewy, though teetering a bit towards over-cooked, perhaps due to the lateness of my lunch hour. The two pieces of tempura I selected were as expected, though the potato croquette was peculiarly limp, as if underdone.

A bit of sticker shock will hit you at the register at Kagawa-ya; my bowl of noodles and two pieces of  tempura came to $17.20 before tax & tip (there is a tip jar). Had I found and added the egg I craved, it would have been over $20 with tax, steep for lunch (unless you happen to be part of the gray hoodie target market). 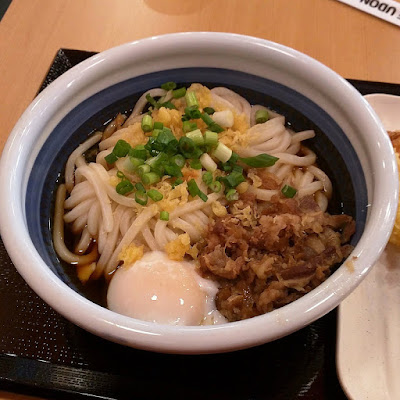 Compared to the loneliness of Kagawa-ya on a Tuesday afternoon, Marugame Udon was a veritable happening upon my Friday visit. Arriving at 2:25 PM, I joined a serpentine line outside Marugame's new digs at Stonestown Galleria, not in the food court, but at street-level between Olive Garden and Chipotle. The vast majority of the cheerfully anticipatory crowd were college-aged (and some high school-aged) Asians.

Thirty-five minutes after getting in line, I was able to place my order for a large bowl of Nikutama Udon ("Served with Sweet Flavored Beef, Soft  Boiled Egg, and Kake Sauce." and proceeded to the tempura station where I selected, as I had at Kagawa-ya, a shrimp tempura and a potato croquette.  Once you've paid for your order, there is another station with free toppings, such as spring onion, cilantro, wasabi, ginger and tempura flakes. I added sparingly from this bar because I wanted to appreciate the flavor as prepared by the chef. 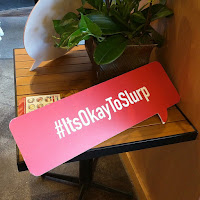 Marugame, unlike Kagawa-ya offers two bowl sizes,"regular" and "large." For comparative purposes, the "large" Marugame bowl appeared to be larger than the Kagawa-ya bowl, if only marginally so. The contents turned out to be quite different, particularly the "sweet" beef in Marugame's bowl. It was sliced much thinner than that of Kagawa-ya's and, as advertised, was sweet, very sweet, cloyingly so, as if it had been candied.  Oddly, the broth itself did not seem to pick up this sweetness, as it seemed less sweet than the broth in Kagawa-ya's niku udon. Other than the difference in sweetness, the broths seemed similar, perhaps both  were of the Kansai dashi variety (hey, I'm learning!). The noodles themselves were perfection, chewy without being overly firm or mushy. The "soft boiled" (actually poached) egg was an additional blessing.

Cash register comparison? Not even close.  My beef noodles with an egg and two similar pieces of tempura came to $13.60 before T&T at Marugame.

An Eater Los Angeles article proclaims that "Marugame Udon Might Be the Most Authentic Japanese Restaurant in LA" in the sense, I suppose, that McDonald's might be the most authentic American Restaurant in Tokyo. You might, in fact, get the impression that you are actually in Japan, especially if, like me, you've never been there.