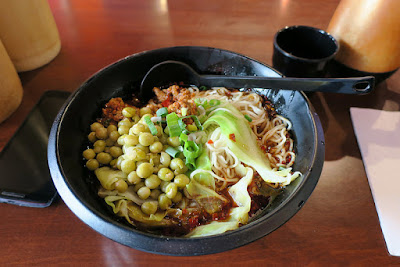 My diet regimen finally ran aground, due to a failure of due diligence, so I decided "To heck with it, I'm going back to full noodle throttle." This decision arose out of a fit of blind envy: my TV teased me mercilessly with flickering images of Anthony Bourdain (whom I cannot abide) and his bro Eric Ripert downing all manner of great-looking noodles and other fare in Sichuan and Chongqing, and I cracked.  Why should those guys have all the fun?

My first order of business was to return to Chongqing. Chongqing Xiao Mian the restaurant, that is, not the Chinese Municipality. Not because Messrs. B. and R. had been yucking it up in the latter, but because I had unfinished business with the restaurant. After my first visit at Chongqing Xiao Mian when I greatly enjoyed the namesake dish (which I knew to be a hallmark of Chongqing), I wondered about the provenance of the other noodle dishes, some of which I knew were not particular to Chongqing. Then I stumbled across a fascinating article on the Roads and Kingdoms website about one Li Jieping, "Chongqing's Number One Noodle Obsessive."  Josh Friedman, the guilao Chongqing noodle novice assigned to follow him around and sample many, many bowls of Chongqing xiao mian, concluded his favorite was the one known as wan za mian. That particular dish, I recalled, was on Chongqing Xiao Mian's menu, and immediately jumped to the top of my bucket list.

Chongqing Xiao Mian was packed on a Sunday afternoon at 3:00, with all the tables occupied except for the central communal table, where I gladly took a seat.  I pretended to study the menu, but I was already aware of the restaurant's portion sizes and passed on appetizers, ordering omly a bowl of wan za mian, listed on the menu in English as "noodles with peas and meat sauce," and a pot of hot tea.

Chnoqing xiao mian noodle dishes typically involve a range of toppings choices over noodles in the same broth, typically a spicy one (milder options are usually available).  My choice, Wan Za Mian, features yellow peas and marinated ground pork as the main toppings, The yellow peas, also found in Burmese cuisine, are similar to chick peas in texture and flavor, and not at all "mushy."

When my bowl arrived, piping hot and fragrant, I was not disapponted. It was what I would call semi-dry, heavily sauced, but not really a soup. The Mount Emei of noodles sat in an honestly spicy broth, redolent of Sichuan peppercorns and chili oil. There was a generous amount of yellow peas and ground pork on top. The yellow peas had a slightly crunchy texture, and the ground pork was at once sour and salty; additional garnish was provided by green onion tops and a couple of slivers of Shanghai bok choy. I'm not sure if the broth was less spicy than the straight Chongqing xiao mian noodle dish from my first visit, or the additional flavors of the marinated ground pork and the blandness of the yellow peas attenuated it more than the noodles alone would have. In any event, the overall effect was more pleasing and multi-dimensional than the naked CQXM of my first visit, and I would choose it again over that version.