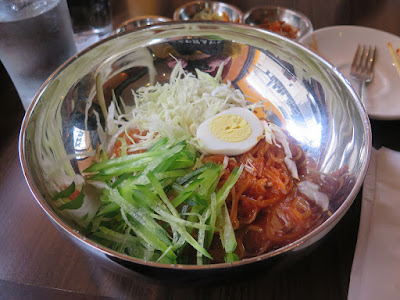 Note: I'm working on a new blog of broader interest (but still food-centric), "The Hungry Psychogeographer," so you can expect the posts here to be less frequent and/or less long-winded. Rest assured, though, I'll still be chasing down my beloved noodles and reporting here on anything of interest.

Back in my beatnik days, I had a friend named Joey Zygai who grew up boasting that his family was the last listing in the White Pages of the San Francisco phone book (when phone books were still important). Obviously,  Zzan Korean Cuisine wasn't around then; in fact, it opened just a week ago in the space that used to hold a Thai restaurant (whose name, incidentally, began with an "A"). 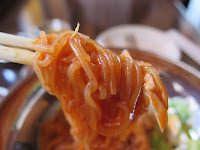 Jjol myeon (Hangul 쫄면) literally means "chewy noodles" and refers to both a type of noodle and to a dish made with the said noodles. It's listed on Zzan's menu as "Spicy Chewy Noodles." It's a cold dish, supposedly invented as recently as the 1970s. According to Wikipedia, the noodles are made from wheat flour and wheat starch (a common ingredient in noodles served chilled). A tangle of noodles heavily coated with gochujang (Korean Chili sauce), vinegar, sugar and minced garlic sits in a stainless steel bowl topped with a thicket of shredded cabbage, another of julienned cucumbers and half a boiled egg as the sole significant protein source. It was a tasty, refreshing dish, but would have been even more so had I had it on opening day, when the temperature hovered in the 80s.

My cold Korean noodles were accompanied by only three banchan side dishes (including an exceptional kimchi) but refills were freely offered. Service was cheerful, prompt and efficient (though I must point out the room was nearly empty at 1:30 PM on a cool, drizzly Wednesday). The venue has a casual "soju bar" atmosphere and is a welcome addition to the Upper Tenderloin/Lower Nob Hill area and a place I'll return to. 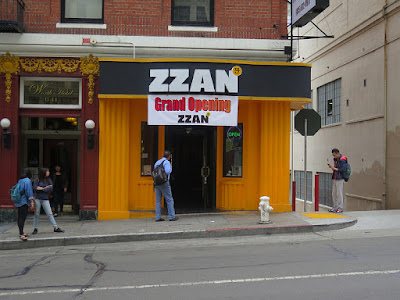