A Respectably Fiery Chongqing Classic From A Shanghainese Noodle House


My favorite SF noodle houses of recent vintage are Chonqing Xiao Mian, which flies the flag of Chongqing's signature dish of the same name high, and Gourmet Noodle House, which is so thoroughly Shanghainese  it would fly the flag of Yellow Croaker Noodle Soup if it had a flag. It never occurred  to me that the two noodle cultures would sometimes intersect, so it came as a surprise  to me when I headed to Gourmet Noodle House to recalibrate my tastebuds for an upcoming trip to Shanghai and found that Chongqing xiao mian (the dish) had been added to the menu. 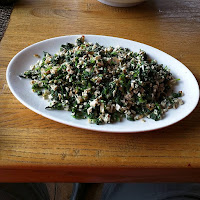 I'd already had most of the Shanghai noodle classics on Gourmet Noodle House's menu, so I decided to take a flyer on the CQXM to see how it stacked up to the version at its namesake restaurant. Quite well, I can report. The noodles were fresh and springy, and the broth was respectably fiery; any fear I might have had about them dumbing it down was not justified, though I did notice a not displeasing difference in the ma-la balance between the two versions.  Gourmet Noodle House's version seemed a trifle more ma (numbing) and a trifle less la (spicy), but with no distance between the two broths in terms of their ability to please a spice-lover's palate.  One structural flaw, if such it be, was the ratio of broth to noodles; the copious leftover broth was a bit too oily and spicy to down as soup. Nonetheless, it had a side benefit; there was too much to discard, so I brought home a sufficient quantity to add some cooked-up noodles and make my own Chongqing xiao mian.

Since Gourmet Noodle House only offered the plain version of Chonqing xiao mian (no toppings other than garnish), I added a side order of malantou (a finely chopped mix of dry tofu and the tart, slightly bitter herb-like vegetable know as Indian Aster).  This cold salad dish made my meal undeniably Shanghinese, as well as adding the desired protein to my early dinner. It was as pleasing a version of the dish as I've found.