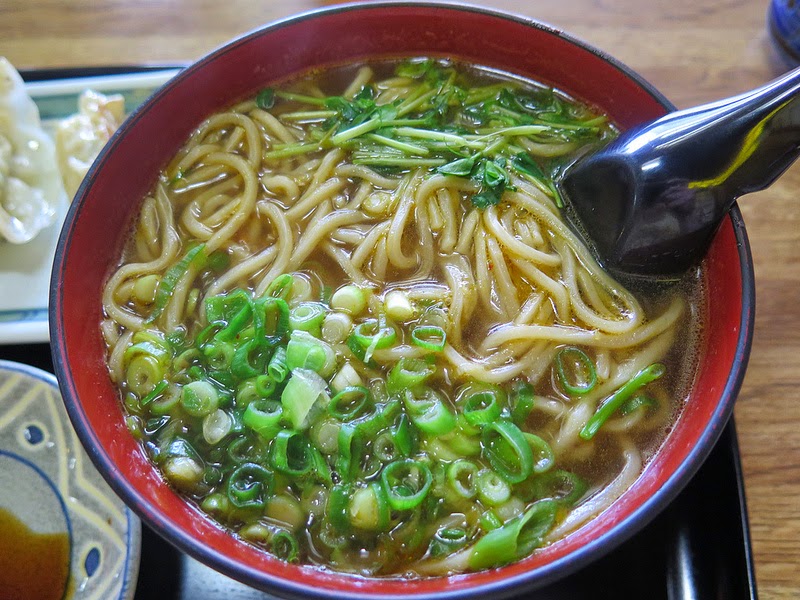 I headed out to Japantown to check out Udon Mugizo, a promising new venue featuring hand-made udon and a creative menu (sea urchin cream sauce udon, anyone?) but alas, it's closed on Mondays. Not to fret, because literally steps away was Sapporo-Ya, the only ramen joint currently on my short list and it was open. 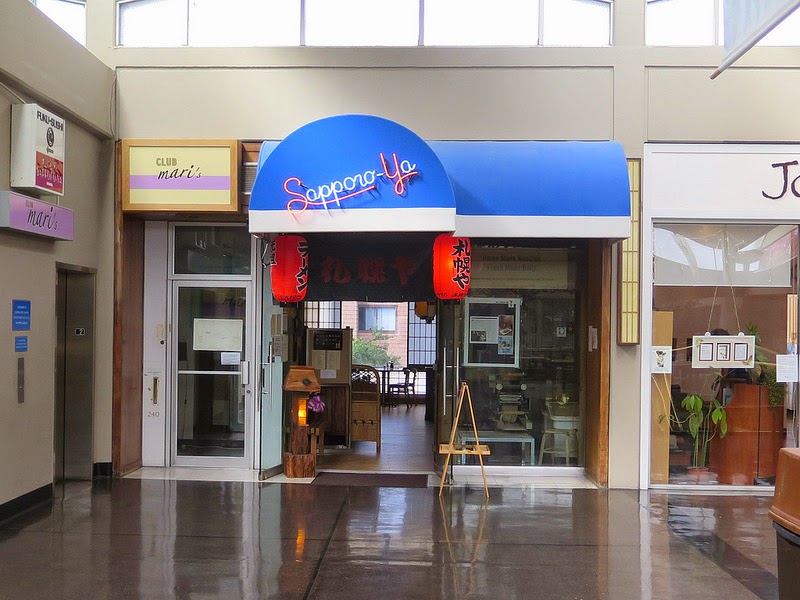 I'm pretty much done with ramen unless it brings great celebrity or some other novelty attraction with it, but Sapporo-Ya is that rarest of birds, a ramen-ya that makes its own noodles.  It's one of my pet peeves about ramen that while its purveyors loudly trumpet the effort that goes into their broths, so little concern is typically shown for the provenance of the noodles themselves.  A recent article posted on Eater.com revealed that of ten top ramen destinations in New York (as adjudged by New York Times taste-makers), nine of them get their noodles from what is IMHO essentially a large industrial noodle maker, and only one (Ippudo) makes its own noodles in house.

Sapporo-Ya not only makes its noodles in house, it has been doing it for three decades, and is obviously very proud of it. This pride is evidenced by the vintage noodle machine on display in the front window, and by the top-listed item on the lunch specials portion of the menu, "Plain Ramen with 1/2 Gyoza," which is what I ordered. (Sapporo-Ya does have a full menu of ramen broths and topping options, but what better way to feature the noodles themselves than with a "plain" ramen option?) The "1/2 Gyoza" is half a full order  of gyoza, which also are made in house, and no, they are not served IN the ramen. 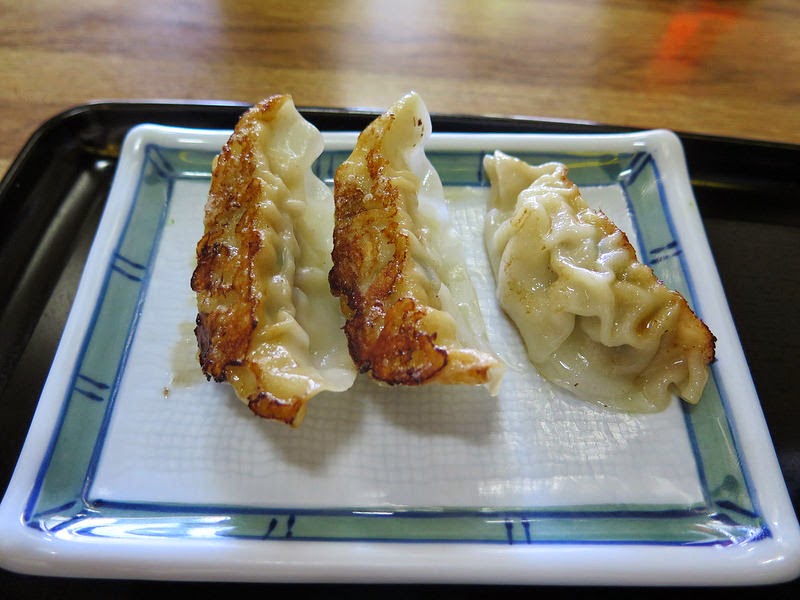 My ramen came with straight, medium thickness (by ramen standards) noodles in a subtle porky broth that was only slightly salty and slightly oily, a medium that definitely wasn't designed to upstage the noodles. It was perhaps too demure until I enhanced it a bit with a few shakes of ground red pepper.  It was not a totally plain bowl, as their was some greenery atop, mostly scallion tops. Not complaints here about the hotness of the broth -- it came almost scalding hot, and I manged to burn my lips sampling it. Even with the heat of the broth and the extra time it took to cool down and consume, the noodles retained their chew to the very end.

Overall, the "plain" ramen was a pleasant experience, and a great alternative to the salt and fat bombs we habitually expose ourselves to  in eating ramen.  It was a bit like eating a Suzhou-style "white" soup with freshly made noodles, so ubiquitous in Shanghai.  The gyoza, I'll add, were also very good. 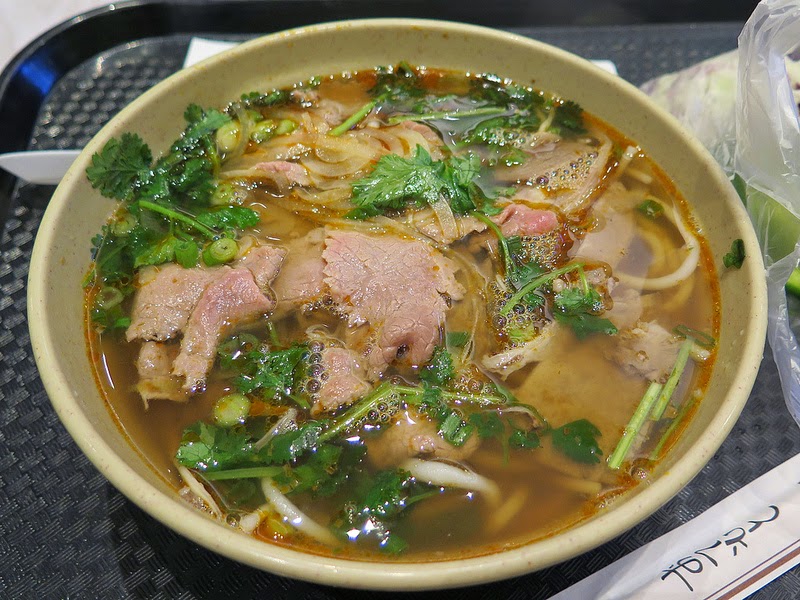 The other day my wife cajoled me into joining her on a trip to the glitzy new Graton Casino in Rhonert Park. It was a deal I couldn't refuse: free round trip transportation, $25 free slot machine play credit and a $10 food voucher. It was the latter, plus the proximity of Graton (only an hour by bus from Chinatown) that sealed the deal.

When I had burned off my gambling credit, my stomach was growling. I eschewed the M.Y. China anchor tenant (been there, done that) and headed for the food court area, which includes Boathouse Asian Bistro, a sister restaurant to Santa Rosa's Kettles Vietnamese Bistro. 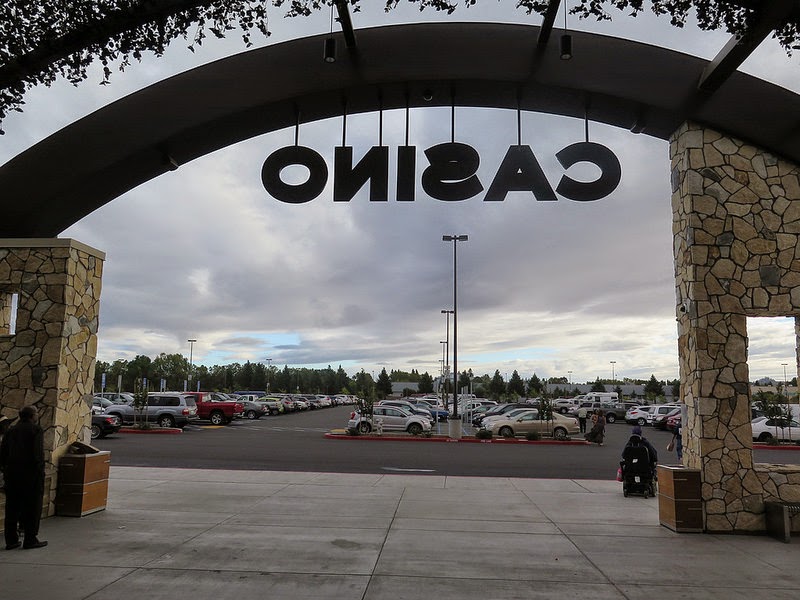 Boathouse Asian Bistro features phở and bún, with a few Chinese-y steam table dishes for aficionados of "combination plates." The noodle soup choices included "Chicken Phở Soup," "Beef Phở Soup," and "Spicy Beef Soup." I ordered the last, guessing it to be Boathouse's take on a Bún bò Huế.  If so, it was a dumbed down version, with no pork blood cubes, pig knuckle, or pork of any kind. The only meats present were  steak and brisket, and it lacked the lemon grass background flavor of BBH.  On the other hand, it did seem to have a more northern-style broth, without pronounced medicinal overtones of star anise or 5-spice, though it came with a southern-style array of add-in garnishes on the side.

Overall, it was not a bad almost-free ($10.95, or a buck more than my voucher) rice noodle soup by any name, considering the environs. The broth was clean, with a mildly spicy bite to it, the rice noodles neither over-cooked nor under-cooked, and the beef fresh and of decent quality.

Now about those slot machines.....

Ohn No Khao Swè Round: Hitting The Midpoint at Mandalay 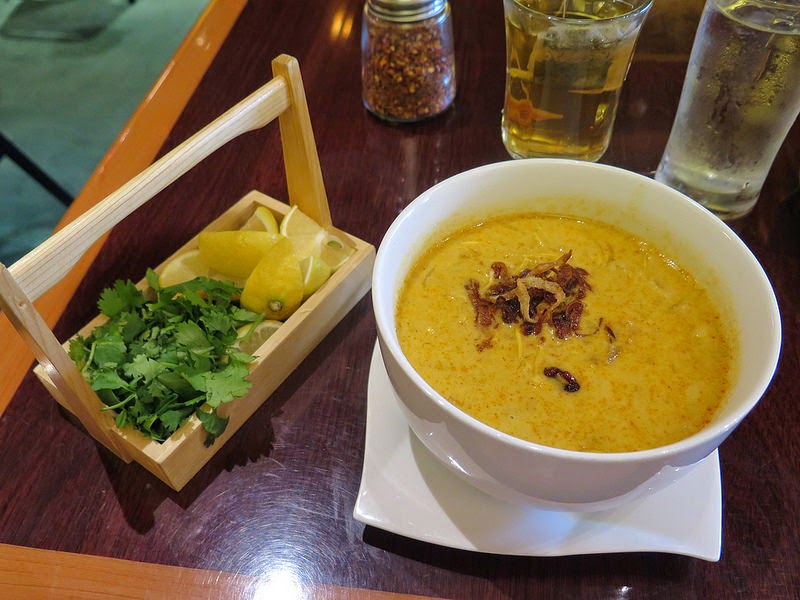 A few months back I wrapped up a survey of all eight Burmese mohingas available in San Francisco, just because they were there, and it occurred to me recently that I might as well do the same with the Burmese noodle dish Ohn No Khao Swè. After all, I had already randomly covered the dish at three of the eight Burmeses restaurants in town*, and certainly wasn't averse to going for five more.

While mohinga is considered Burma's national dish, Ohn No Khao Swè, the curried coconut chicken noodle dish. might be considered the people's choice. It's certainly grown on me, having overcome my distaste for coconut (largely due to this very dish), so I resumed my quest today at Mandalay. 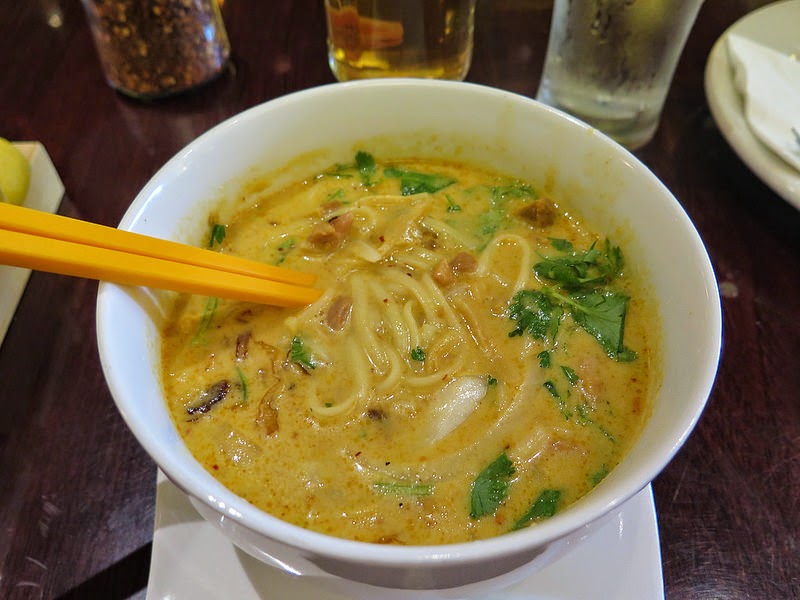 Like Mandalay's mohinga, the restaurant's ohn no khao swè comes short on adornment, but long on flavor depth.  It's placid golden surface is broken only by a topknot of fried shallots; no chickpea fritters or crunchy samusa shell shards. It's literally deep, too, as Mandalay seems to favor smaller circumference but deeper bowls. The chicken and boiled egg slices (which came first?) lurked beneath the surface of the broth, supported by a modest bed of wheat noodles (light on the noodles seems to be another Mandalay characteristic).

My ohn no khao swe (it's called Ong No Kaw Soi on Mandalay's menu, but I'm sticking with the first transliteration I used in this blog) was accompanied by a condiment caddy with lemon wedges and cilantro. There appeared to be a whole lemon's worth of slices, and a veritable garden of cilantro. The broth, however, came already pleasantly tart and in need of only a couple of token squeezes. I used the cilantro liberally, however, and added some pepper flakes from a shaker to kick up the heat.

While a satisfying lunch, on balance I'm not sure Mandalay's ohn no khao swè will stack up against the competition as well as their mohinga.  The flavor depth was admirable, but this type of soup cries out for a heartier complement of noodles and some textural add-ins such as chickpea fritters or other crunchies.

Four down, four to go! 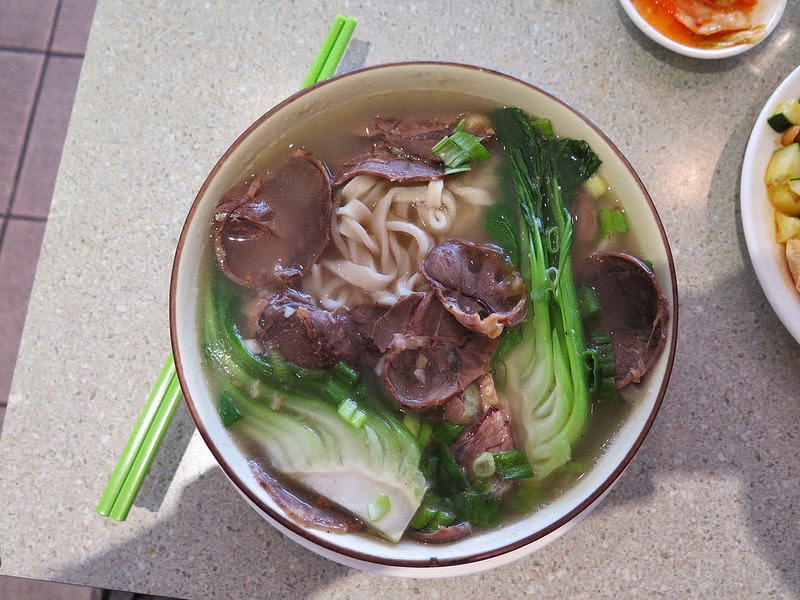 I've written abut how the ubiquitous "Lanzhou Lamian" noodle shops of Shanghai made me a confirmed noodle lover with their on demand hand pulled noodles. Contrary to popular belief, "Lanzhou Lamian" doesn't refer strictly to a noodle making technique, nor to the place where the technique originated; the term is inclusive of  a method of preparation of a "clear broth" (清湯, qing tang) soup which has been a traditional medium for showcasing hand-pulled noodles for over 100 years.  The very subtle broth, said to be devised by one Ma Baozi in Lanzhou, Gansu Province, has an obvious purpose: to stay out of the way of the handsome fresh hand-pulled noodles, so they can be appreciated on their own merits.  In a way, Lanzhou lamian is the polar opposite of Japanese ramen, where the broth is all-important and the noodles are almost an afterthought.

After an initial visit to China North Dumpling on Noriega St. a couple of months ago to vet  the hand-pulled noodles I noticed that an item simply titled "Beef Noodle Soup" on the menu was listed as "Clear Soup Beef Noodles" in Chinese and wondered if this was a nod to "Lanzhou Lamian" style soup.  A return visit today confirmed that it was, or at least appeared to be.  The subtle, faintly aromatic broth was reminiscent of numerous bowls I have had in China under the blue and white "Lanzhou Lamian" signs, and adding a smidgen of chili oil made it even more so.  The beef was even more uncannily familiar: thin, dry slices (possibly of beef shank) that would be disappointing in almost any other context but totally appropriate here. The only thing lacking was cilantro, and the hearty stalks of bok choy (almost de rigueur in San Francisco) seemed out of place.  For their part, the noodles did not disappoint, Large, thick and chewy, they knew themselves to be the center of attraction and strutted their stuff with noodle pride.

If you are in the mood to savor the glorious, glutenous, wheaten goodness of hand-pulled noodles for their own sake, "Beef Noodle Soup" at China North Dumpling is what you need.  If you are craving an aggressively broth and showy toppings, no soup for you.