Back in the Noodle Again at Katana-ya 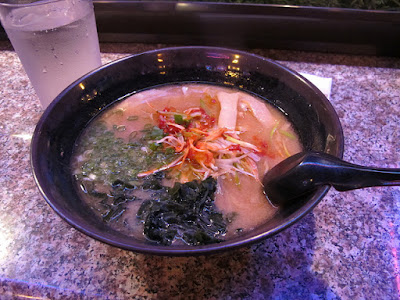 For reasons related to being on a diet I've been avoiding noodle runs for a few months.  It hasn't helped, so screw that.  Going forward I'm going to build my diet around noodles.  I made that decision walking through the heart of downtown San Francisco a couple of hours ago when my radar picked up Katana-ya.

Katana-ya is noted for its house special everything-but-the-kitchen-sink bowl of noodles, but it was too early in the evening to declare it dinner time so I opted for a bowl of spicy green onion miso ramen.  The toppings included an equal amount of cross-cut spring onions and onion tops and spinach.  There was one thin slice of pork, bamboo shoots and, I think, bean sprouts. The noodles were fresh and springy enough, and the broth spicy enough to clear my sinuses. The miso broth was rich-tasting and not overly salty. (Or was it that the chili oil heat had just shouted down the saltiness?)  Katana-ya doesn't get a lot of respect (other than for its gut-busting house special, which even includes fried chicken in the toppings) but considering its central location, generous bowl size and generally reasonable pricing, it's a decent ramen option in downtown San Francisco.