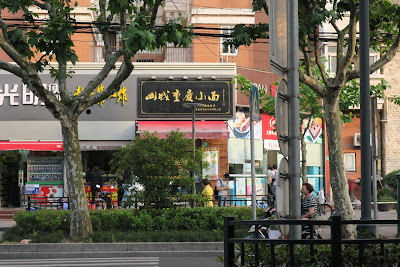 I've just returned from my eleventh trip in Shanghai in 25 years, this one overlapping the 25th anniversary of my first visit in April and May of 1992.  They weren't all noodle-focused trips, to be sure, though noodles were always lurking in the background, but this time I had little else on my mind. My strategy was not to chase down noodle destination in this city of 50,000 restaurants, but to wander and let the noodles find me.  Slurp randomly found noodles I did, from fine bean thread noodles to bedsheet-sized biang biang noodles, topped with pork, beef, lamb, clams, tofu and even donkey meat, mostly in the Zhabei neighborhood where I was staying.  Without further ado, here are some tour highlights, in chronological order: 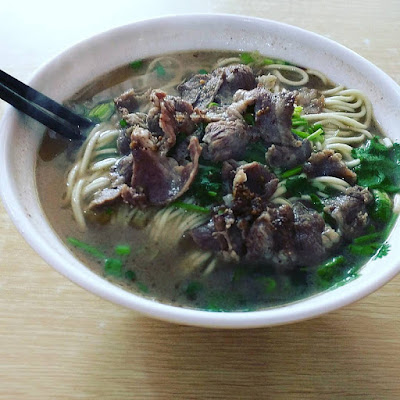 Saozi Mian at Yu Shan Fang (dry version) - Yu Shan Fang was my big find of the trip, a spare and cheerful Xi'an food outpost just two bus stops from my apartment, good enough to make me forget Xi'an Famous Foods. Vegetables, tofu and a bit of ground pork sauced with a now-familiar sour Silk Road flavor which is as much Mediterranean as Chinese topped linguini-like noodles in an exemplary Qishan saozi mian.. 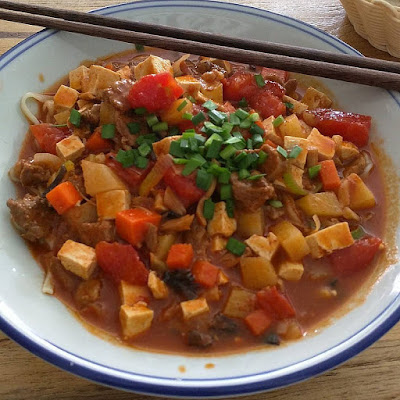 You Po Che Mian at Yu Shan Fang - I couldn't, and wouldn't wait to return to Yu Shan Fang for what is perhaps my favorite of Xi'an noodle dishes, spicy you po che mian. This dish, like the one above, is presented as a thing of art, but must be stirred vigorously to coat the noodles with the toppings (and some underlying chili oil) before consuming. 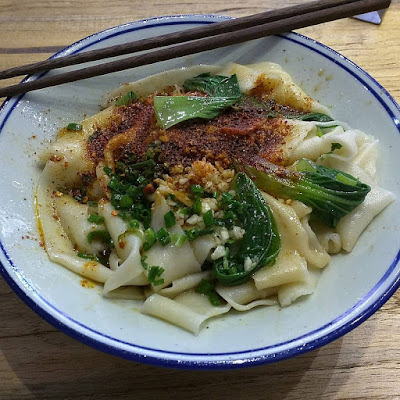 Biang Biang Mian "4 Ways" at Yu Shan Fang - Xi'an restaurants typically have house special combinations of 3, 4, or even 5 toppings  YSF's, if I recall correctly, were pork, tofu, bean sauce and tomato & egg. Like the two dishes above, the topping were meant to be stirred into the bedsheet-sized biang biang noodles (some heavy lifting there!). 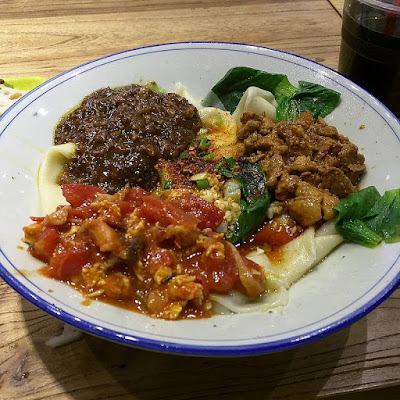 Hong Shao ("Red-cooked") beef hand-pulled noodles at Hong Shao La Mian - tearing myself away from new best friend Yu Shan Fang, I found this gem of a hole-in-the-wall on Yanchang Lu, opposite the entrance to Shanghai University's Yanchang campus. More of a Taiwanese style than a Lanzhou style, it featured high-quality beef in a very beefy broth. 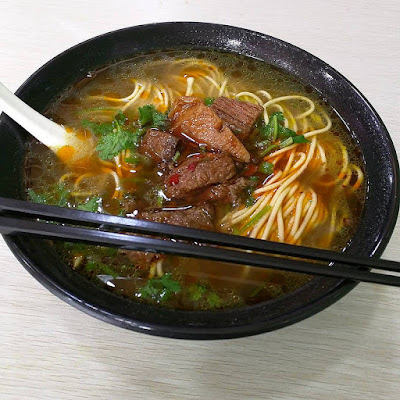 Clam Ban Mian from Gourmet Noodle House (Raffles City branch) - Gourmet Noodle House (家有好面 in Chinese) is a popular Shanghai chain that may or may not be related to the San Francisco noodlery of the same name. Although parts of the menu are similar, I couldn't resist this "tossed" noodle dish featuring a small mountain of shelled clams, not found in San Francisco. Even in the tacky Raffles City mall venue, GNH lived up to its reputation for good noodles with this dish. 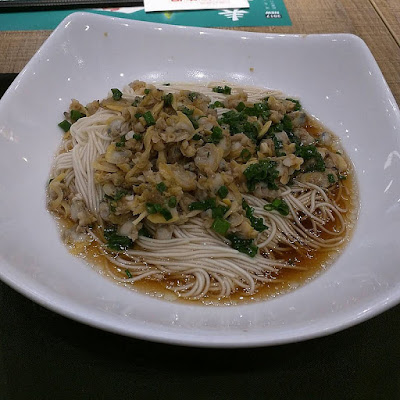 Qishan Saozi Mian (wet version) at Yu Shan Fang - having initiated my romance with Yu Shan Fang with the sauced version of saozi mian, I of course had to try the soup version and was not disappointed. 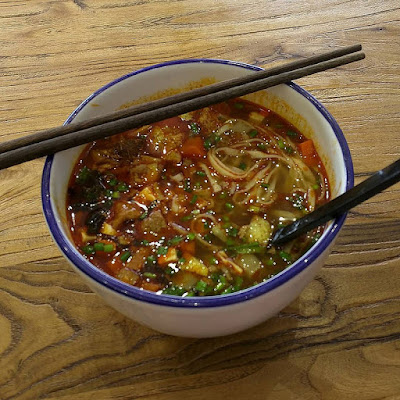 Lamb Noodles at Muslim Boutique Beef Noodles (Luochuan Lu) - sparkling clean and, yes, a bit boutique-y in appearance, this place had the lowest prices and possibly the biggest menu of any mian guan I encountered. The lamb here was of much higher quality than the standard Hui brotherhood places. 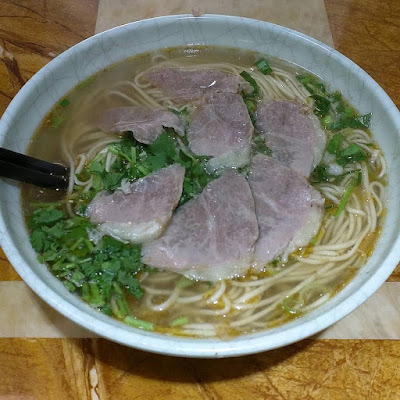 Curry Beef and Bean Thread Soup at Hutu Shengjian - A bean thread soup with either beef or tofu is a traditional accompaniment to an order of Shengjian bao, and the version at Hutu was by far the best of three I tried. Not only did it have the desired beefy flavor, its garnish even included a couple of hard-boiled quail eggs. 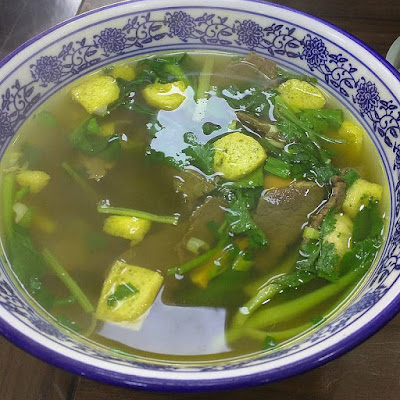 Donkey Noodles at Donkey Daddy (Lu Ba Ba Lu Rou Huo Shao) - It took a bit of research to find donkey noodles in my neigborhood. Donkey Daddy didn't have the Henan hui mian version I was looking for, but I was able to pair it with my first donkey sandwich (lu rou huo shao) of Beijing fame. I found the donkey meat blander and a bit sweeter than beef, and distressingly soft in texture. 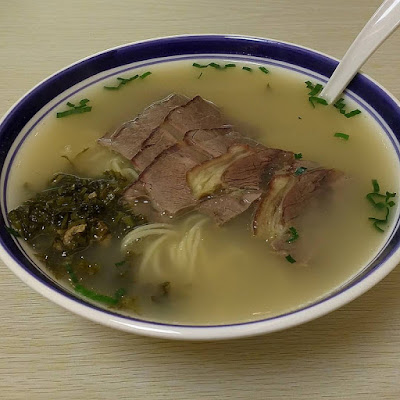 Liang Pi at Yu Shan Fang - A 100° day sent me back to Yu Shan Fang for a cooling liang pi accompanied by a large bottle of pineapple fruit beer (lurking in the background). I can recommend the former much more heartily than I can the latter. 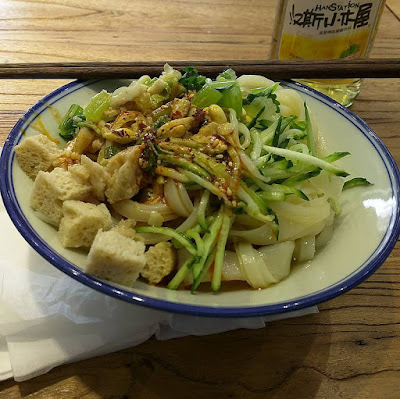 Ji Dan Hui Ma Shi ("Cat's Ear" Noodles with Tomato and Egg) at Yu Shan Fang - my last go at Yu Shan Fang.  The combination of cat's ear noodles (elegantly translated by my Waygo application as "Orecchiette") and the tomato-based silk road flavors of this dish gave it a particularly Mediterranean character, almost like a minestrone. 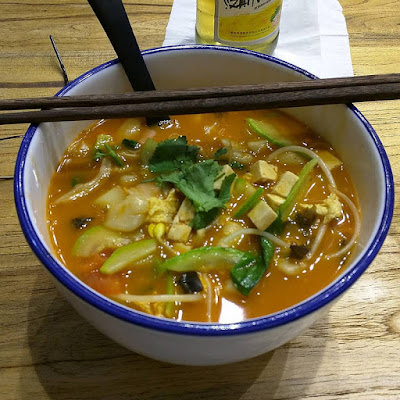 Niu Rou La Mian at Muslim Boutique Beef Noodles - Back to the "boutique" for one last classic Lanzhou style soup with clear broth an better than usual beef -- all for 9 yuan ($1.35). 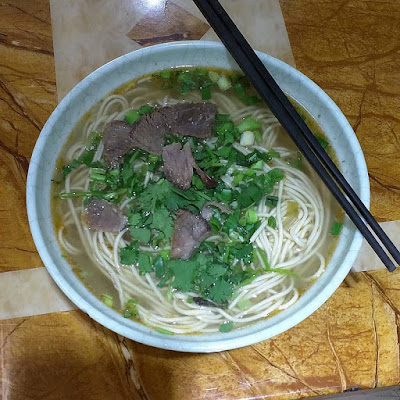 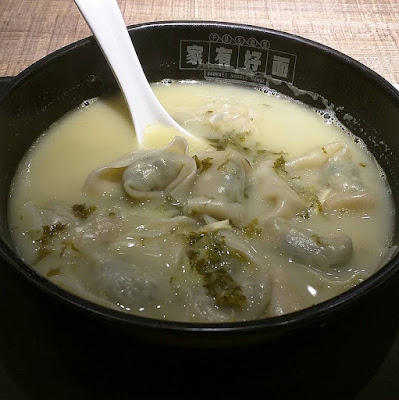