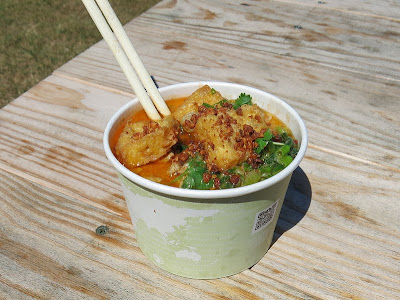 Thanks to a chowhound.com post by ramen chaser Melanie Wong, I discovered that noodles were being repped in the food vendor area at America's Cup Village (the Marina Green viewing area for America's Cup 2013) by Noodle Me, and swung by to check out their offerings on the last day of preliminary events. 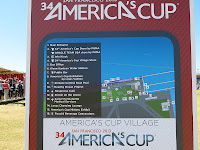 Noodle Me (nice bilingual pun there) is a pop-up enterprise, soon to be a bricks-and-mortar establishment, by two noodle mavens currently operating out of the Dobbs Ferry Restaurant kitchen.  Noodle Me's intended modus operandi is a build-your-own bowl concept, though for practical reasons they are offering a fixed menu at the America's Cup Village.  The menu on my visit included three noodle choices: "5x's Happiness," "Godzilla Bowl," and "Coco Bang Bang." Based on the ingredients (and clues on Noodle Me's website), the first of these is apparently the pair's take on a pho ga, the second a miso ramen (see Melanie's review), and the Coco Bang Bang a variant on the Burmese Ohn No Khao Swè, but using pork instead of the customary chicken.  It was the Burmese noodles that interested me most, and that's what I ordered.

The posted ingredients of "Coco Bang Bang" were "egg noodles, coconut curry broth, fried tofu, chili, pork, bok choy, onions, cilantro, scallion" and all seemed to be present in what I was served. There was a selection of condiments to be added as desired, and I threw in a spoonful of crushed peanuts (which seemed most appropriate for this dish).  In retrospect, it might have benefited from a couple of the jalapeno slices available as well. 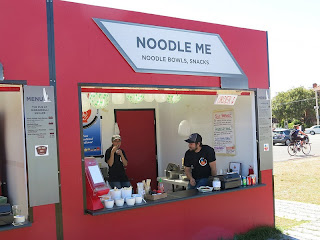 There are a number of environmental constraints in serving noodles at an outdoor venue like this, but my bowl fared pretty well, regardless.  It was served with the broth less than piping hot, which was probably circumspect, given that the bowl was filled to the brim and some rather uneven terrain separated the food stall from the nearest picnic table. In addition, during the time it took me to pose the bowl for snapshots and to find my eyeglasses (which had been blown off the table by a stiff breeze), my Coco Bang Bang had cooled further, to barely lukewarm. (Oh, for a heavy ceramic or stoneware bowl!)

Although the bowl was smallish, there was a generous amount of protein in the form of fried tofu and ground pork, though the texture of the ground pork didn't seem right for this dish. Slivers or chunks of pulled pork might have worked better.  I'd also note that though the Coco(nut) component of the broth was well developed, there wasn't much "Bang" in the form of spice heat which, of course, would be easily remediable in Noodle Me's intended DIY environment.

I look forward to meeting up with the Noodle Me folks again in a more noodle-friendly setting.

Where slurped: Noodle Me stall, America's Cup Village, Marina Green (near the end of Fillmore St.)