Xi'an Gourmet's Saozi Mian: A Soup By Any Other Name Would Smell As Sweet


I returned to Xi'an Gourmet to try the third in a triumvirate of hallmark Shaanxi noodle dishes they offer, saozi mian,  臊子面  (listed in English as "Ground Pork, Dried Bean Curd Soup Noodle"). The "sao" character in this food's name, means "the smell of urine, or of the fox, skunk, etc.; foul smell," according to my Pleco Dictionary. The soup does contain a complex broth with sourness as an element, but I've never encountered a version of it that was in least bit "barnyardy" at worst. Interestingly enough, "saozi" with identical Chinese characters as the soup's name is defined by Pleco as dialect for "minced meat (cooked) to be added to noodles or other food before serving." That fits saozi mian to a "T" but one has to wonder which is the chicken and which the egg here; did the term "saozi" exist before the dish, or was it coined to make the dish's name more palatable?  To complicate matters even further, the word "saozi" (嫂子) with a different character for the "sao" means sister-in-law, and some mute inglorious Miltons (or Li Pos) in China have concocted more than one story involving a sister-in-law to explain the dish's name.

I think it's fair to say the origins of the dish's name, as well as of the dish itself, are lost in antiquity. According to People's Daily Online,

Qishan* Saozi Mian (Qishan-style noodles with minced meat) has a long history. It began as early as in the Zhou Dynasty (1046 BC – 256 BC). It is a kind of noodles poured with pork soups (Saozi means diced meat) plus tofu, dried lily flowers, agaric,kelp, carrots and Chinese chives or garlic sprouts and tastes sour and hot, leaving people delicious aftertastes. 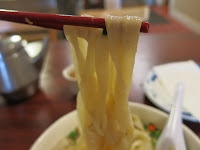 I can't be sure my bowl of saozi mian contained all of the ingredients mentioned by People's Daily, though the pork, tofu and carrots were prominent and accompanied by egg and a galaxy of savory vegetable matter which I didn't try to map as I enjoyed my noodles. According to another Chinese website, saozi mian is "famous for its five features: thin, chewy, hot, sour and fragrant." I confess to bending the rules by ordering wide noodles. I'll remain recalcitrant on that score; Xi'an makes its noodles to order, and ordering them wide is a luxury I couldn't pass up on. The noodles (wide, not thin) were chewy, and the broth was hot (mostly from black pepper), slightly sour and definitely fragrant -- but not of urine, skunk or fox, I will have you know. 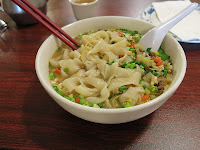 I've had bowls of saozi mian with a more satisfying edge to the broth, mostly through the use of chili oil for heat, but Xi'an Gourmet's approach using black pepper ensures a nearly grease-free bowl of noodles. Given the balance of the lean minced pork, vegetable matter, and toothsome noodles, it's probably one of the healthiest bowls of noodles a carnivore could hope for.

*Qishan is a district in Shaanxi reputed to be a cradle of saozi mian, and the dish is sometimes called Qishan mian (perhaps to avoid the "sao" connotations) or Qishan saozi mian.