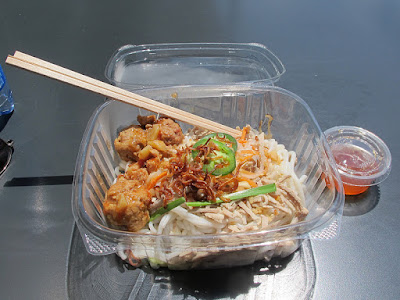 The emergence (so to speak) of another pop-up specializing in Vietnamese Street food is cause for rejoicing.  In the past Rice Paper Scissors' Bap Xao and Soup Junkie's Bun Rieu have been memorable experiences for me. The latest entrant to this genre is the collective effort of three cousins known as 3 Bottled Fish, which I caught up with today at The Window, a pop-up venue hosted by Coffee Bar. The derivation of the name is a convoluted affair, which you can read about in SF Weekly's review of the group's maiden appearance last week, but it works for me. The menu at today's appearance appeared to be the same as last week's, and since I tend to go for the least familiar in general and am on a mission to check out anything noodle-y in particular, I went for the Bun Tam Bi. Bun tam bi, it turns out, is a cold rice noodle salad, garnished with julienned pork and pork rind, coconut milk and fresh mint among other things, served with a chili sauce to drench it with.  It also came with a side of pork meatballs.  Together, the $8 dish made for a substantial lunch, and overall it was a very refreshing blend of textures and tastes which I will gladly order again. 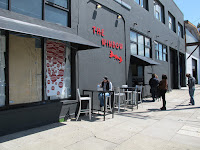 The Window is just that, a takeout window built into the side of  Coffee Bar, a commissary and soon-to-be cafe with an extensive roster of pop-ups to schedule from.  It has, however, some sidewalk barstool-high tables for early birds and latecomers to sit at in its sunny 12th and Howard location.

Where slurped: The Window, 1599 Howard at 12th Street, San Francisco 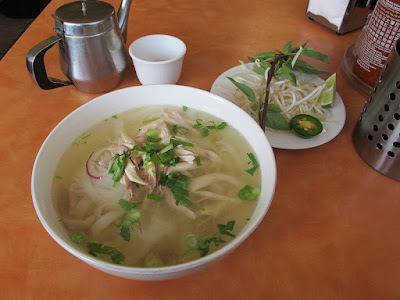 Strolling down Irving Street today, Pho Phu Quoc Beef Noodle House (a.k.a. PPQ) suddenly materialized in front of me.  I was fighting off the nasty tail end of a cold, and  "Aha! Chicken soup!" was the thought that leapt to mind. PPQ is a relatively stolid mainstay in the ever-changing pan-Asian fast food landscape of mid-Irving St. (have a look at K.O. Kombo, which mixes banh mi and Hong Kong milk tea with burgers and pizza slices).  It's also the older brother of the better known PPQ Dungeness Island on Clement St. The Irving St. PPQ is known for the best pho in the immediate area, but I'd never tried its pho ga (chicken pho with broad rice noodles).

PPQ's pho comes in two sizes, "medium" and "large" (to call the smaller one "small" would be false advertising). Their chicken pho comes in three varieties, including five-spice and curry versions in addition to the traditional chicken broth, which I chose. My medium-sized bowl of pho ga xe phay came with tender shreds of chicken (both dark and white meat, though I would have preferred more of the former and less of the latter) and supple fresh wide rice noodles.  The broth was beautifully balanced, deep in herbal flavor with a tinge of sweetness and a mere hint of peppery-ness.  Other than two slices of mild japapeno and some bean sprouts I tossed in from the garnish plate, I did not see fit to add any notes to its carefully coaxed bouquet.

I can't say PPQ's pho ga is the equal of Turtle Tower's iconic version (I think I'm due for another round of that one) but as Asian penicillin it was just what the doctor ordered today.