The Bun Mam is Fishy at Mong Thu Cafe, But That's All Right With Me 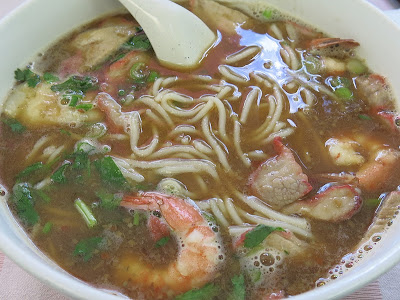 Having had my fill, for the moment, of the robust hand-made wheat noodles I love so much, thanks to near neighbors Xi'an Gourmet and To Hyang at Geary & 2nd, I resumed my Tenderloin quest for outliers in the Vietnamese rice noodle firmament. This took me back to Mong Thu Cafe, which I found closed on a previous visit, for my quarry, bún mam.

Bún mam, sometimes referred to as Vietnamese gumbo, is a specialty of the Mekong Delta. Bun, of course, refers to the thin rice noodles, and according to this article in the Chicago Reader, "mam, as in mam ca loc (fermented fish paste)... provides the elusive element of deep rounded flavor that puts the mam in umami." Noted Vietnam blogger "Noodle Pie," currently writing a book about Vietnamese street food, once dubbed bun mam as the best noodle soup in Vietnam. 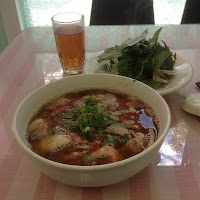 As far as I have been able to determine, the modest little Hyde Street noodle and sandwich shop known as Mong Thu Coffee Shop (on its awning) or Mong Thu Cafe (on its menu) is the only place in the San Francisco proper that serves bun mam.  According to Mong Thu's menu, what I had to look forward to was "Fish based soup with boiled pork, shrimp, and fish served with thin rice noodles."

The woman who took my order, in a routine already documented on Yelp, asked me if I'd had it before, and advised me that it was a little bit "strong" in flavor, intimating that I might not like it. I assured her I knew what I was getting into, and loved a good fish flavor.

When my bowl came, it was heavenly fragrant.  The deep rich broth held thin rice noodles (which were a little on the soft side), six prawns, and a melange of bits of fish, fish cake, BBQ pork, beef and whatnot.  A friend says that he gets the impression that Mong Thu cleans out their refrigerator with this dish, but it might be that the pungent aroma just reminds him of the inside of his own refrigerator. It's possible the protein add-ins might make use of leftovers, but the real star of this dish is the broth. It's fishy, in the best possible way. 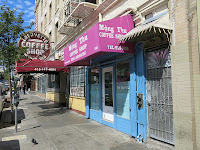 I've never quite understood people who don't want their fish to taste "fishy." It's like wanting your pork not to taste "porky," or your chicken not to taste "chicken-y" (well, maybe that's what bonelesss, skinless chicken breasts are for). If you're in that category, you might not want to try the bun mam at Mong Thu.  But if you are one of those people who, like me, always feel like drinking the leftover dipping sauce for your Imperial rolls, the broth in bun nam might be the nectar of the gods for you.