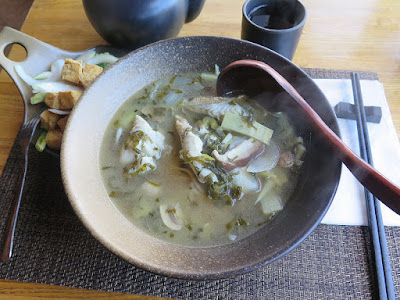 San Francisco has been blessed with decent Shanghainese resturants over the years and noodle-centric establishments featuring house-made Chinese noodles of varied provenance, but until now the two have never really overlapped.  Gourmet Noodle House, which opened two weeks ago at Geary and 2nd, is either an outpost of the Shanghai mian guan (noodle shop) chain of the same name or a brazen knock-off. The fledgling local eatery and the Shanghai chain have identical signage, identifying themselves as "Jia You Hao Mian (roughly "Good home-style noodles") in large Chinese characters and "Hu Wei Chuan Mian Guan" (Traditional Shanghai Flavor Noodle Shop) in smaller characters, in addition to the English name.

With their focus on Shanghai-style noodle dishes and "small eats" to accompany them, both local and Shanghai shops are also devotees of the fish known here as the "yellow croaker" and in China as "yellowfish" (huang yu), offering it in soup, in spring rolls, and as a fried side dish.  Yellowfish noodle soup has become an iconic Shanghai dish, and is the best known offering at A Niang Mian Guan, considered by many to be the best independent mian guan in Shanghai, though I'm not sure how one chooses the best from among 6,500 of so noodle houses. 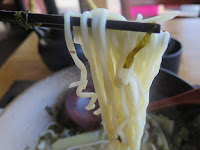 The $9.95 yellowfish noodles ("N4 Special Yellow Croaker W/ Noodles Soup") was, understandably, my first choice of noodles to vet at Gourmet Noodle House. "There's a little bones in it," advised my server when she took my order. I nodded knowingly. It was a warning "out of an abundance of caution," to use a currently popular phrase; it's sometimes nearly impossible to remove all the fine bones from yellowfish when de-boning. (In fact, I found no bones in my soup.) Along with my soup I ordered a side dish fried tofu. 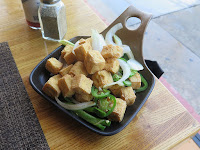 My soup arrived in an attractive wide-brimmed shallow bowl of the type favored by some ramen-yas today, and a long-handled wooden spoon to accompany chopsticks. I tasted the broth, which was fishy in the best way, without the cloying sweetness sometimes found in SE Asian fish broths, before digging in to the noodless. Thin slices of bamboo shoots and some Chinese greenery accompanied a generous portion of fish flesh chunks. The uniform (probably machine extruded) noodles were pleasantly chewy and held their firmness to the end of the bowl Overall, it was a bowl of yellowfish noodles that acquitted itself well, even in comparison to A Niang's paramount version. I didn't think of it at the time, but a dollop of soy sauce might have brought it closer to A Niang's richer-seeming broth.

The fried tofu side dish was pleasing as well, adding protein and textures to the meal. A heap of crispy, non-greasy cubes of tofu were intertwined with slices of raw onions and jalapenos. It was a bargain, at $3.95. 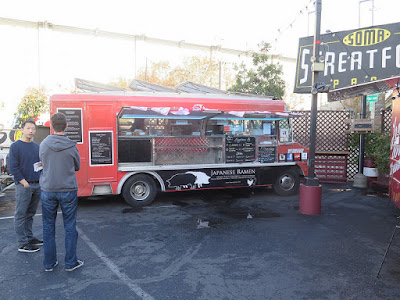 When Matt Cohen, co-founder of Off the Grid and food truck mogul, quit the hotel management business, all he wanted to do was to sell ramen from a truck.  But he found the permitting process in San Francisco so opaque and arbitrary and the prospect of success so unpredictable that he turned his efforts to decoding the process, steering others through it, and lobbying (successfully) for a more transparent, faster and fairer permitting system. In the process he began building an empire of food truck venues for himself, and eased the way for for individual entrepreneurs to launch food trucks. Like Torraku Ramen. 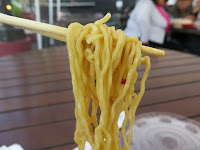 Torraku Ramen, which debuted yesterday at Carlos Muela's SoMa StrEat Food Park, may be the only Food Truck 2.0 vehicle to devote itself exclusively to ramen now plying the streets of San Francisco. There have been other food trucks trying ramen as a diner option, tented food stands featuring ramen, and even a food trailer purveying house-made udon, but not until now, to my knowledge, a self-propelled, fully mobile ramen-ya. 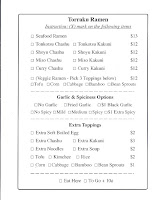 Torraku Ramen uses a ticketing system popular in Japan and some stateside venues where the user marks and hands in a ticket indicating their choice of broths and toppings and any add-ins they desire. (You can, of course, verbally order and make the cashier do the work) The truck offers tonkotsu, shoyu, miso and curry broths with choice of chashu (pork shoulder) or kikuni (pork belly) toppings for $12, or seafood ramen for $13. There's also a veggie option with a choice of three toppings for $12. The price may seem a little steep, though a double digit price is becoming more the rule than the exception at new ramen joints. There are also various add-ins available for $1-$3, and a surcharge for black garlic and "Extra Spicy" options. Gyoza and other typical ramen shop sides are also available. 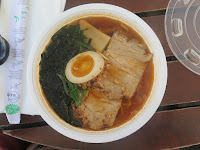 I visited the truck on its opening day at about 2:30, well after the the lunchtime peak, and waited about 10 minutes for my shoyu chashu selection to materialize. (Longer waits are to be expected at lunchtime, as they cook the noodles to order). I'm not a ramen maven (I've always made clear it's not my favorite noodle soup form), but I liked my bowl of ramen just fine. It was piping hot, the medium curly noodles pleasantly chewy, broth deep in flavor and not overly salty, and the half-egg had a nice soft yolk. The (no cost) spicy option had the broth respectably spicy, so there's no need to order the "Extra Spicy" add-on unless you are a chili head. There was not a lot of protein in the toppings, (something typical of ramen in general). Overall it was a tasty, solid bowl of ramen,, comparable to what you'd expect in a decent sit-down ramen-ya.