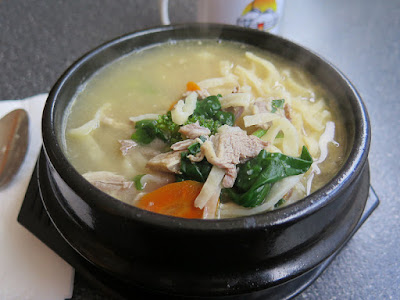 [Note to my fellow noodlers: with this post I have suspended Full Noodle Frontity to focus on some research projects, not all of them food related.  I will also be returning attention to my legacy blog, Geezericious, which will include coverage of foods other than noodles, cuisines other than Asian, and even topics other than food.  See you there!]

A few weeks ago I wrote about a stealth Mongolian cafe in San Francisco named Let's Jam (which has since come out of the closet as Mongol Cafe), and today I visited a similarly situated venue in Oakland, Asian Grill, which is soon to be renamed "Togi's Mongolian Cuisine. It's located in Downtown Oaklad at 14th and Webster, and as of this writing still identified as "Asian Grill" in its signage, though its menu (in English and Cyrillic characters) offers only Mongolian Food. (Yes, Goulash is a Mongolian staple, adopted from a dated Soviet Union culinary canon.) 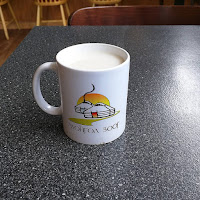 True to this blog, I ordered one of the two noodle dishes on the menu, Lamb Stew Noodle Soup, made with house-made traditional Mongolian steamed noodles (蒙古焖面). (The other noodle offering, "Tzu-van," is a dish I tried on my San Francisco Mongolian food excursion, though I'm eager to try Togi's version as well.) The steamed noodles (also known as stewed noodles) are cooked by placing the raw wheat flour noodles on top of the other ingredients, which may be partially pre-cooked, in a covered pot over low heat. Along with my noodles, I ordered a traditional Mongolian milk tea as a beverage. 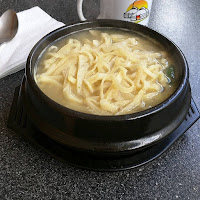 My stew arrived in a heavy stoneware vessel.  All the noodles were on top, so at first glance it looked like just a bowl of noodles. I'm guessing the noodles were all on top because they wee cooked in the came vessel they were served in, with the soup added at the last minute.  Lurking beneath the noodles was the stew of finely slivered lamb, carrots, various greens including (ugh) broccoli, and what appeared to be ginger.  It was served piping hot, too hot to sip at first, and the heavy stoneware vessel kept it very hot, forcing me to savor the soup and its treasures slowly. Remarkably, the robust noodles kept their chew to the very end. The broth was familiar, slightly fatty from the lamb, and comforting, a bit like a Scotch broth or pepper-pot soup though less peppery. It was the perfect lunch for a chilly July day, as it happened to be.

I have to say I was  not a fan of the Mongolian milk tea. It's an approximately 50/50 mixture of tea and extra-rich milk (possibly condensed milk)  heavily salted and with a slightly medicinal flavor. It's definitely an acquired taste, one which I am in no hurry to acquire. The good news is that Togi's has applied for a beer and wine license.