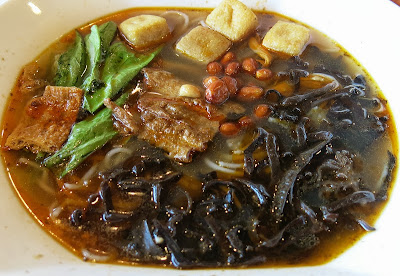 On my recent foray to Oakland to vet the signature offering of the new Guilin Classic Rice Noodles restaurant, I was intrigued by another specialty on the menu, Liuzhou Spicy Snails Rice Noodle soup. At the same time I was a bit wary of this dish, because I didn't know if it had whole snails in it and I didn't relish the prospect of inexpertly sucking the meat out of snail shells in front of an audience of not my peers. Thanks to a Chowhound.com post by "Dave MP" and a little additional research, I learned that there are no snails at all in Spicy Snails Rice Noodle Soup, just a broth that is snail-based.

Liuzhou Spicy Snail Rice Noodles, or Liuzhou luosifen, is the most famous noodle dish of Liuzhou, a city to the south of Guilin in Guangxi province. So intimately associated with the city is this soup that Liuzhou uses it to promote itself, and at the 2012 Liuzhou Water Festival an event called "10,000 people eat luosifen together" was held, as reported by veteran blogger Liuzhou Laowai. The blogger also has the best description of "Liuzhou spicy snail soup" I have been able to find, so I will quote him (from the same blog post) here: 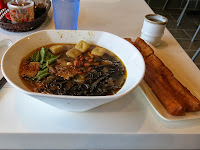 Blogger Liuzhou Laowai goees on to add that restaurants' specific recipes are generally kept secret, so what he is reporting is an approximation. I certainly can't confirm the spice mix in the stock of the version I had at Guilin Classic Rice Noodles, except that it was deep and rich.  As for the add-ins in my bowl, they were as reported in Liuzhou Laowai's paradigm, and also included wood-ear mushrooms. The pickled vegetables included Liuzhou's famous sour bamboo (suansun) which, along with the chili oil (and apparent black pepper in the stock) were dominant characteristics of the broth. As there are no snails present in luosifen, what there was of protein came from the boiled peanuts, tofu skin and what appeared to me cubes of fried tofu. The rice noodles in the soup were thinner than the spaghetti-sized noodles in Guilin rice noodles, more "vermicelli"-like, like Vietnamese bun. Not my favorite type of noodle generally, but it hardly mattered here, so satisfying was the "soup" part of the dish, at once sour, spicy, rich, deep and sharp.

Taking a cue from Chowhound Dave MP in the post cited above, I ordered a youtiao (fried dough stick) for crumbling and adding the my soup once the solids were eaten. The youtiao at Guilin Classic Rice Noodle are house made, and smaller, darker and crispier than typical doughy Chinatown youtiao. Adding pieces of youtiao to a broth already slick from chili oil may not be exactly what the doctor ordered, but heck, it tasted good and I'll remember to do the same when I next drop in for some less-oily Guilin rice noodle soup. Which will be soon.