The Guilao Goes To Oakland For Classic Guilin Rice Noodles


Thanks to BART, I can get from home to Oakland's Chinatown faster than I can to the Richmond or Sunset Districts in San Francisco. Nonetheless, it takes a major inducement to get me to venture to the Mysterious East Bay, and today it was the promise of Guilin mi fen (rice noodles) at a new Oakland noodle shop, Classic Guilin Rice Noodles.

I developed a fondness of for Guilin rice noodles in Shanghai (where they're much more easily found than Vietnamese pho), mostly at  a "Guilin Mi fen" shop on Wuyi Rd. near Tianshan Tea City, a frequent destination. Until now, there has been no venue specializing in this regional noodle style in the immediate Bay Area; Classic Guilin Rice Noodles, in a corner of the old Good Luck Supermarket building on 10th St. in Oakland's Chinatown, changed all that when it opened at the beginning of September. 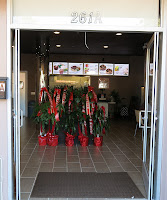 When I arrived around 1:30 PM, the front room of CGRN was nearly full, but I managed to find a seat at a two-top by the window (I later discovered there is a spacious rear room as well, which was empty at the time).  After perusing the colorful menu, I settled on a combination of salty beef and crispy pork for my toppings, although I had no idea what "crispy pork" was and my server's command of English was hopelessly inadequate to clarify it. (It turned out to be thin, bacon-like slices of pork belly.)

Classic Guilin Rice Noodle's menu consists of a "classic series" composed of five different topping choices (barbecued pork, salty beef, beef brisket, beef tripe, and crispy pork) as well as all possible combinations of two of these items for a total of 15 choices. Noodles with a single topping are $5.50, and $6.50 for combinations.   In addition, there is a "Special Rice Noodle Series" composed of just two entries: Spicy Snails Rice Noodle ($6.50), and "Special Small Bowls Rice Noodle" ($8.50).  This latter is a service of five small bowls with different toppings, akin to the way Thai boat noodles are sometimes offered.

Also on the menu are a handful of medicinal soups/stews in clay pot ($7.25 each) , and three lotus leaf steamed rice and meat entrees, served with soup and vegetable for $6.50.

When my noodles arrived, I recognized most of the usual suspects from my Shanghai Guilin noodle-eating experiences.  There was the same surprisingly robust spaghetti-size rice noodles, the same bland milky white broth screaming for an infusion of chili oil, the same thin slices of beef, boiled peanuts and cut green beans in the topping. One striking difference was that at Guilin Classic Rice Noodles the broth was served on the side in a small bowl. I'm not sure of the reason for this, but it made it easier to spice the broth as desired and to evenly distribute the seasonings in the broth before dumping it into the soup.  For me, a healthy dollop of chili paste, a quick stir, over the top into the noodles, and I was set with a hearty, evocative blast from my Wuyi Road Guilin Mi Fen past. 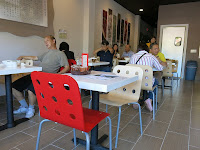 Classic Guilin Rice Noodles is a bright, spacious, newly built out shop furnished with what might be called Fast Food Modern (seats bolted to the floor, and all that). I discovered the back room, with a huge mural of Guilin karst formations almost covering one wall on the way to the bathrooms. There are separate men's and women's bathrooms, each huge and as spotless as the rest of the restaurant.

Overall, Classic Guilin Rice Noodles is a fun place to slurp some fen, and, even after factoring in my Senior citizen BART fare, probably as cheap a bowl of tasty noodles as I'll eat anywhere in the area. 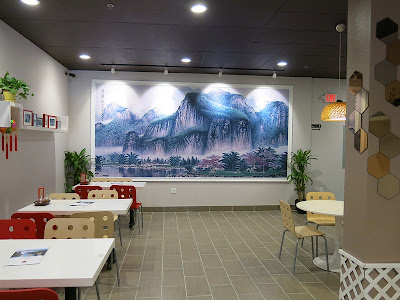