It was something of a marvel when Tea Garden opened a couple of blocks from my office in late 2004, and even more of a marvel that is still exists and apparently thrives today, eight years later. Tea Garden is a mom-and-pop hole-in-the-the-wall restaurant located between San Francisco's traditional Financial District and the booming South of Market area where seemingly every other block is coveted for development of a 50 story luxury condo building. Ostensibly a bubble tea emporium (whence the name) located in a foodie wasteland where Subway has long battled it out with Quiznos, Tea Garden is actually the closest thing to a Taiwanese hawker stall you'll find in the City, if not the whole Bay Area. Its menu includes a couple of beef noodle soups, over-rice dishes including pork chop over rice, gua bao, fan tuan, a host of other Taiwanese pastries, and oh, yeah,  a long list of tea drinks.

When Tea Garden first came to light, Taiwanese small eats fans were ecstatic about the Taiwanese Beef Noodle Soup, proclaiming it on Chowhound.com the best and most authentic around. Some were even more blown away when the owners came out with a version of the famous Taiwan Railway pork chop rice bento box. Said one Chowhound: "I had the pork chop over rice and almost fell out of my chair as it brought back memories of childhood train rides in Taiwan."

I've been retired for more than six years, and seldom tread the stretch of Mission Street where the Tea Garden resides, I but find myself checking Yelp reviews from time to time, just to see if it continues to exist. Happily, neighborhood changes and rising rents have not driven it out of the area, nor has lack of business even though it seems to fly under the radar. It was at Tea Garden that I had my first self-identified Taiwanese Beef Noodle Soup, years before this blog was even a twinkle in my eye.  Would the soup still be good?  Had the restaurant retained its homespun, close-to-the-bone character?

"Beef noodle soup" I said, the minute I walked in the door, as if they might suddenly run out of it if I took the time to peruse the menu.  I took a place at one of the two tables (there is still the long counter opposite the pastry case and kitchen) and looked around.  It seems as if little had changed, other than the prices and the fact that I had my bowl of soup brought to my table by a server (a son of the owners?) instead of having to ferry it myself.  It turns out there are two beef noodle soups on the menu, the House Special "with soy sauce"   and another one "without soy sauce" as well as some dry noodle and some rice dishes.  By not having specified, I was served the "with soy sauce."

My House Special beef noodle soup was basically a red-cooked, stewed beef version with lean, but very tender chunks of beef.  There was perhaps more soy sauce than typical for a red-cooked beef noodle spoup, and little evidence of star anise, but the broth was rich and satisfying. The noodles were of the round "la mian" variety, rather the flat linguine-style noodles I was served eight years before (in a clear broth version, if I recall correctly).  They were a little soft for my taste, but that may have been the result of my arriving at a time when supply had begun to outrun demand.  It was an amply-sized bowl and overall one I'll return for, but not until I've tried the clear broth version. And maybe a bao on the side. 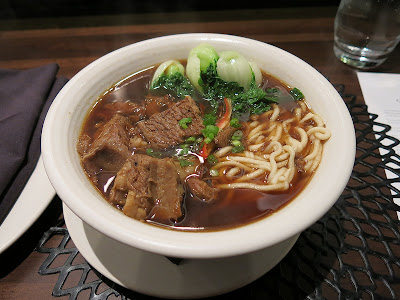 When news started trickling down about Martin Yan's glitzy new casual dining venture under the dome at the Westfield Centre, M.Y. China, I was most heartened by the prominence to be given to the craft of noodle-making.  Yan was assembling a whole team of noodle pullers (and cutters, slicers and choppers).  When the menu came out, it promised Hand Pulled Noodles with beef, Knife Cut Noodles with tofu, and Scissor Cut Noodles with wild boar.  There would be Hong Kong Crispy Noodles, Dan Dan Noodles, and Squid Ink Snap Noodles with Seafood.   The menu holds other delights as well such as dumplings (Wild Boar Xiaolong Bao!), wok dishes, roasts, and a variety of small eats,  but duty called me to sample the noodles, beginning with the benchmark hand-pulled beef noodles.

It's listed on the menu as Beef Hand Pulled Noodle Soup, and described as "slow simmered rib eye, baby bok choy, star anise."  Though the M.Y. China menu provides no descriptions in Chinese, It was easy to guess that it was most likely a traditional Taiwanese-style beef noodle soup, or Niurou Lamian. I ordered the Beef Noodle Soup and (because I couldn't resist) an order of  Wild Boar "Juicy Dumplings" (xiaolong bao) to savor while I waited for my soup. 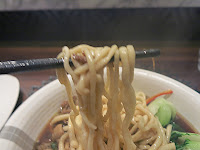 At a venue like M.Y. China, there's the tendency to expect high prices to go hand-in-hand with small portions. That wasn't the case, at least with my $14 bowl of soup.  It was a healthy, meal-sized bowl, and generous with both the succulent slow-simmered beef and the springy noodles.  The broth was rich but not particularly fatty, characteristically sweet and dominated by star anise notes. It wasn't as medicinally complex as some Taiwan-style broths, but was fully satisfying and comforting on a gray and drizzly day.  If there was one fault I cold find with the soup, it was that the noodles, which seemed optimally chewy when I began eating them,  teetered on the brink of being overcooked by the end of the bowl, even though I wan't particularly dilatory in slurping them. It should be pointed out that it was only the second day of operation for M. Y. China, and there was a lot of cheerful chaos about; the softness of the noodles may have been due to a timing issue in the cooking or the delivery.  I was seated at the opposite end of the counter (which extends the length of the open kitchen) from the noodle stations, and was unable to track my noodles' journey from puller's hands to my own eager maw. In addition, though I don't know if it was a slip-up or S.O.P., no soup spoon was delivered with my soup. I ended up drinking the soup directly from the bowl, local style.  But that's really as it should be, Westfield Centre or not.