It's heartening so see that Lao food now has a year-round presence in San Francisco (especially since the Lao New Year Festival was a no-show this year) courtesy of Oakland's Champa Garden, which opened a San Francisco branch near City College a week ago. Champa Garden is actually a Lao-slash-Thai restaurant (or a Thai/Lao restaurant, apparently, if you are the person who tagged it on Foursquare) and it takes some parsing of the menu to figure out what dishes are characteristically Lao.  The conventional wisdom (from veterans of the Oakland venue) seems to be to start with the Champa Sampler plate of Lao Sausages, Fried Rice Ball Salad, and Fried Spring Rolls, and go from there, but I was in noodle-tracking mode when I paid Champa Garden my first visit.

Some research pointed me to a dish called "Kaow Paik" (more fully rendered as "Khao Piak Sien" elsewhere) on the Champa Garden menu for my first Lao noodle adventure.  Not only is this soup adjudged characteristically Lao and longed for by overseas Laotians, but the version offered by Champa Garden promised home-made noodles.  Sold! 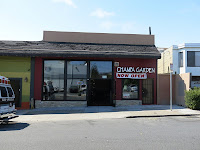 There is some irony in choosing khao piak sien as a characteristically Lao dish, because it is devoid of a prominent characteristic of most Lao foods, namely spice heat. It is a noodle soup with chicken meat in chicken broth, plain and simple. (Pork can be substituted as a meat, though it would seem silly to do so.)  Khao piak sien is somewhat akin to a Northern Vietnam pho ga, with the broth at Champa Garden seemingly blander, seasoning-wise, but richer in chicken-y flavor depth. In fact, the broth in my khao piak sien seemed almost akin to my grandmother's chicken soup, made from chickens dispatched to the cooking pot when they were too old to lay eggs.  Of course grandma wouldn't have had galangal or lemongrass for seasoning, but her spicing was probably as aggressive, heat-wise, with only black pepper in her arsenal. Even the "pulled" chicken chunks in my soup at Champa Garden reminded me of days down on Grandpa's farm. 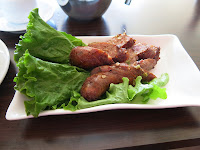 It is probably in recognition of Champa Garden's kaow paik's native bland unctuousness that the server volunteered some condiments (not kept on the tables here) for seasoning it, including both sweet and spicy chili pastes and soy sauce.  I used a dab of each of the chili pastes, but what the heck: if God wanted khao piak sien to be fiery, He would have sent it out of the kitchen that way. And it was probably also in anticipation of mildness of the soup that I fortuitously ordered a side of Lao sausage, wonderfully and agressively spiced. 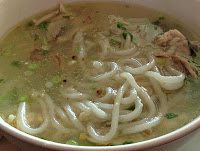 The real highlight of my lunch, noodle-lover that I am, were the noodles themselves. The term "khao piak sien" translates roughly to "fresh rice noodles" or "wet rice noodles" (without the sien the term can denote congee), and fresh they were. These noodles are made of a mixture of rice flour and tapioca starch (with the latter constituting up to 50% of the mix) and formed round and fat, the size of udon noodles.  The tapioca starch gave the noodles a slightly gelatinous cast and a bounciness not typically found with rice noodles.  I suspect it also aids in flavor absorption, though I'd need a spicier soup to test this theory. Let Kingcredible here show you how to make these noodles!

Overall, it was a solid bowl of comfort-giving noodles, in a chicken noodle soup kind of way.  It's probably not a noodle dish I would seek out again, unless I had a killer head cold and there was no matzoh ball soup in sight, but I'll be back to Champa Garden. Next time I'll ask them to hit me up with the fermented bean soup.