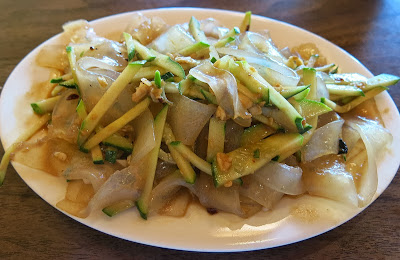 The temperature was pushing 75° F at lunchtime and I declared it a heat wave (not really a stretch, for San Francisco) and an excuse to revisit the newly-opened House of Xian Dumpling and try out a cold noodle offering from their menu. 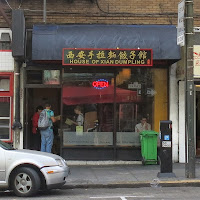 I was surprised to find a line out the door at House of Xian Dumpling just after 1:00 when I arrived, even as House of Nanking had none (granted that HONK has four times the capacity). When I finally got a table, I ordered the "Wide Bean Noodle Salad" from the menu.  In Chinese it's listed as liang ban fen pi, literally "cold dressed starch jellly/noodles" and sometimes shortened to liang pi. In contrast to the wheat starch noodles used by Xi'an Gourmet, House of Xian Dumpling's are made from mung bean starch.  In either case, a chilled jelly-like sheet is cut into wide strips, forming tender translucent noodles and tossed with a savory "dressing."  At House of Xian Dumpling, the dressing includes julienned cucumbers and peanuts in a vinegary, peppery sauce with a hint of sweetness. The sauce seemed nicely balanced, though I added a little chili oil to bring it up to my preferred level of chili heat. Together with the cool, slithery noodles (less chewy than wheat starch noodles) and cucumber shreds,  my plate of liang pi made for a nicely refreshing hot-weather treat I would gladly repeat.

If I have one misgiving about House of Xian Dumpling's "Wide Bean Noodle Salad" it would be that it seems overpriced, relatively speaking. Virtually everything on the restaurant's menu is $5.95, $6.95 or $7.95, with $6.95 being the mode. The dish (listed as an appetizer) is priced at $6.95, the same as the much larger and more substantial bowls of hand-made noodle soups with their generous protein components.  (To be honest, one could also argue that the liang pi was fairly priced, and the noodle soups underpriced.) 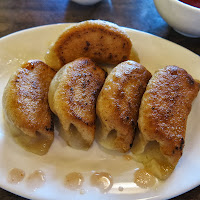 Perhaps anticipating that the cold noodle salad would be less than a meal's worth of eats, I added an order of pork potstickers, one of only two items available from the "dim sum" portion of the menu (the other being green onion pancakes). These were not particularly memorable, reminding me more of jian jiao (dumplings that have been first boiled then pan fried) than guo tie and, while meaty, seemed under-seasoned. They were served with an improbably sweet red vinegar dip that no amount of added chili oil could harmonize.  Like my bean noodle salad, the pot stickers also seemed oddly priced at $6.95 for six pieces, compared to the same price for 12 of the house's signature dumplings (shui jiao).

Speaking of which, I've yet to try the dumplings at House of Xian Dumpling, in deference to my noodle-centric blogging pursuits, but will get around to that, especially since they are in the neighborhood. And though I'm enamored of Xi'an's noodle culture, I'm well aware of the city's claim to fame as the originator of the dumplings known as shui jiao, of which I've downed more than my fair share.