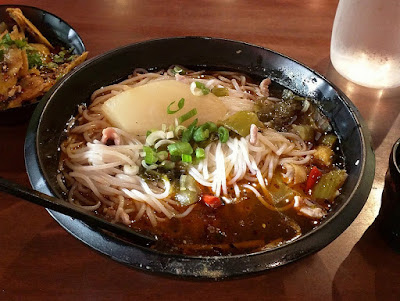 I waited patiently with my Portsmouth Square homies for the weather to heat up enough to fully appreciate a cold noodle dish I've been dying to try, "Sichuan Soba" which is on the menu at Pot & Noodle, but no dice. So I went around the corner to sister restaurant Chongqing Xiao Mian again, for another research project. 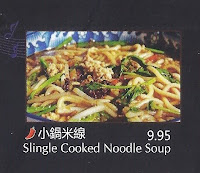 In the upper right-hand corner of CQXM's picture menu is shown another dish I've been curious about, "Single Cooked Noodle Soup." Would this be a soup featuring a single very long wheat flour noodle such as can be found in Shanxi restaurants? Hardly -- the noodles were rice noodles, and had been cut into what appeared to be 4" pieces. This made me uneasy intially, but I figured that if there was at least one noodle for each year I have lived plus a few extra, I'd be okay, and so it appeared. 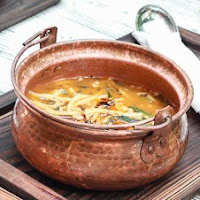 The Chinese name for Chonqing Xiao Mian's "Single Cooked Noodle Soup" is 小锅米线 (xiao guo mi xian) or Small Pot Rice Noodle.  A little research revealed that this dish is a Yunnan dish, and a specialty of Kunming. CQXM's "Single Cooked" probably refers to the fact that this is a one-pot dish, wirh noodles and toppings cooked in the same broth in a single pot. The pot is tradionally a small copper pot, and if the picture at the left from a Shanghai Yunnan restaurant is a guide, the dish is sometimes served in the same pot. (No such luck at CQXM, though.)

My bowl of small pot rice noodles was spicy (ma la) enough to earn its chili pepper symbol on the menu, and the one-pot cooking process rewarded it with a richness and depth of flavor that the spiciness couldn't mask.  It wasn't a particularly meaty broth, though some shreds of beef  lurked in its depths, along with bell pepper tomatoes (possibly), cabbage, peapod (or edamame) tips, leeks and spring onion. Atop the broth and noodles swam a couple of large chunks of winter melon, a novel touch. Beyond visible ingredients, the broth was infused with plenty of chili, garlic and probably other spices, and overall was the star of the show, as I found the rice noodles a little too soft.