The legendary news commentator Wes "Scoop" Nisker liked to urge his KSAN listeners "If you don't like the news, go out and make some of your own."  I guess it can also be said "If you don't like the noodles, go out and make some of your own," which seems to be the attitude of one Hung Lam, who calls himself the Soup Junkie.  According to Eater San Francisco, Lam did in fact get into making his own soups when he wasn't happy with the ones at local restaurants. Tonight he brought his consummated passion to a pop-up at the Vinyl Wine Bar on Divisadero (all the good stuff happens North of Market, no?), to the good fortune of 40 or 50 people who showed up with noodles on their minds.

I arrived early at the Vinyl Wine Bar and Lam and his sidekick were running a bit late, so I had time to nurse a glass of Raging Bitch IPA (like a good wine bar should, Vinyl also has a nice beer list) and let my anticipation grow for the soupe du jour, bun rieu, a Vietnamese crab and tomato rice noodle soup. My expectations were high, baited by the handout which promised "Fresh Crab Omelette, 6-Hour Crab Tomato Broth, Housemade Pork Meatballs, Curled Water Spinach, Tomatoes, Fresh Herbs, Silky Rice Noodles."  Thanks to my early arrival, I was also one of the first to receive my bowl of soup, about 45 minutes after my arrival, while people arriving around that time were told to expect a further hour's wait. .

I had only had bun rieu once before, a version that didn't particularly excite me, and the Soup Junkie's rendition came as a revelation.  A first sip of the broth discovered a complex crab-tomato flavor which held up to the bottom of the bowl. The noodles were as springy and toothsome as I have ever experienced in rice noodles.  As can be seen in the photo above, the airy crab "omelette" (more like a cross between a souffle and a fritatta) was a generous portion, as was the number of little pork meatballs that slept at the bottom of the bowl, a hearty finish to a very substantial and satisfying soup.

I'm usually annoyed when people describe foods as "crack" but since Hung Lam calls himself a soup "Junkie" I'll stretch the metaphor and say yes, what he's dealing is crack for the noodle lover's palate.

Follow @soupjunkiesf to find out where Mr. Lam will be popping up next.

When I reported on the Sapporo-style miso ramen at Kirimachi recently, I promised to return soon to check out the other half of the establishment's two-item ramen menu, tonkotsu ramen. Kirimachi means "Fog City" and TA DA! the fog horns sent me its way today.

Tonkotsu broth, as every ramen nut knows, is made from simmering pork bones.  Pork bone broth has a special place in my soup firmament, since pork neck bone stock is the first choice in soup stocks of my Shanghainese wife, though hers is rendered with a gentler alchemy than  typical tonkotsu mavens would endorse.  Kirimachi's tonkotsu bowl comes with the same set of toppings as their Sapporo miso ramen; I added corn as an extra simply because it had been a long time since I'd eaten corn in any recognizable form. The corn played nicely with the broth and other ingredients (though I'm kicking myself because I hadn't thought off adding it to the chicken-based miso stock on my first visit).  I'm happy to say that Kirimachi's tonkotsu broth, like their miso broth, leans toward deftness and subtlety, demonstrating that a tonkotsu broth needn't be as muddy and yellowish as a river in Shaanxi (are you listening, Ajisen?).

I have to confess that at first sip I thought Kirimachi's broth perhaps too subtle until, halfway through the bowl, I realize I had made the mistake of not stirring the soup. (In my defense, there's something about the careful arrangement of toppings in a bowl of ramen than makes stirring counter-intuitive.)  In any event, the broth intensified in richness and saltiness as I got closer to the bottom of the bowl, and the analog computer in my taste buds calculated that averaging my first slurps with my last would put something just about right on the bottom line.

But I'll have to go back again and stir to be sure. 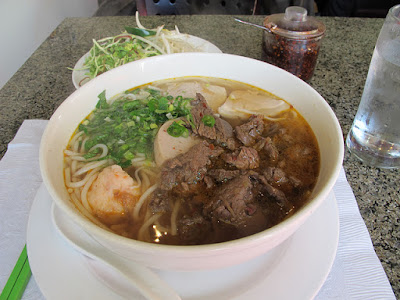 Street food options were very limited at the Tet Festival Street Fair in San Francisco's Little Saigon today, so I decided to take my hunger indoors. It was a brisk, windy day and pho ga would have hit the spot, but Turtle Tower had a waiting line so I found a table at Mangosteen and decided to try out their house specialty, Bún bò Huế even though I had reviewed the same dish at Golden Flower a couple of posts ago. 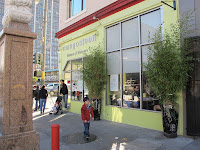 Mangosteen is what you might call hole-in-the-wall moderne, attractive on the outside but somewhat garish internally, with lime-green walls and a purple ceiling.  The rear wall is adorned with a blowup of a quote about Vietnamese culture by Mme. Nhu, evocation of whom would be decidedly un-PC a couple of generations ago.

My bowl of  Bún bò Huế came pleasantly spicy (despite the usual admonition from the server that it was "very" spicy) and topped with beef, pork and shrimp balls.  The broth had a nice depth, rounder in flavor and slightly fattier than that of Golden Flower's, but leaned a tad to the sweet side.  The accompanying garnish platter (greens, jalapenos, bean sprouts and lime wedge) was one of the most generous I have seen,  almost a "side salad" in size.  Overall my soup had more of a distinct personality than the version served by Golden Flower (which seemed more of a variant on the standard pho dishes on their menu than something distinctly regional).  I'll also point out that it's a bargain at $6.95 for a more substantial dish than, say, a bowl of ramen, which can scarcely be found for less that $10 these days. 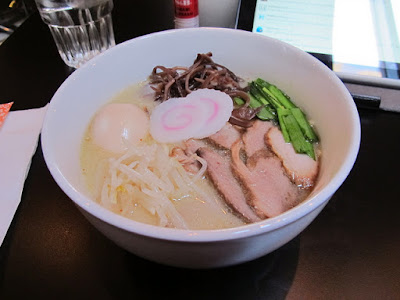 The Year of the Dragon is approaching, but for me it may be the Year of the Ram....wait for it...en. Ramen has never been my favorite manifestation of wheat flour noodles in soup, being characterized by (in my eyes)  overly aggressive murky broths dominating overly delicate noodles; my own preference has been for more muscular la mian exerting its noodlehood in Lanzhou-style clear broths.  But I'm succumbing to the siren call of ramen.  For one thing, a ramen joint is a place for slurping noodles in solitary contemplation, and that's the way I roll.  In this time of economic restructuring and  changing dining habits the ramen-ya is also a coming thing, I'm guessing, with more regional styles and ramen skills on the way; I'm getting with the plan, man.

My quest for my first bowl of noodles outside home in the new calendar year took me to Kirimachi.  It's a new establishment, barely a month old, in a space shared with a chef producing Creole food. This is an arrangement you might expect in the hipster Mission, except Kirimachi is in the midst of Broadway's stripper row. In its brief existrence Kirimachi has generated a lot of positive buzz among ramen True Believers.  It also has the attraction of being the closest ramen shop to my home. 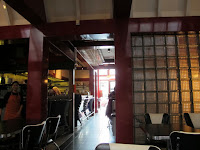 Leonardi, the ramen chef (he's Indonesian but a ramen obsessive who formerly worked for Sanraku) offers just two styles of ramen, tonkotsu and Sapporo-style miso ramen.  He also offers one non-noodle dish, currently unagi donburi, but subject to change.  The noodles are $10 per bowl, tax included, and topped with a generous amount of chashu, chives, kikurage, sliced fish cake, bean sprouts and a soft boiled egg. Organic meats from Marin Sun Farms are used. Extra toppings are $1 ($2 for extra chashu).

I ordered the Sapporo ramen out of curiosity, having some prior familiarity with tonkotsu broth.  The miso broth (made with chicken stock) was rich and salty, but not so overbearing as to overwhelm the noodles, a subtleness that I appreciated.  The noodles themselves were cooked perfectly, al dente without being overly chewy.  The soft-boiled egg was also cooked just right, with firmly set white and a nicely runny yolk.  Overall, it was definitely one of the best bowls of ramen I have experienced, and I'll certainly be returning.

And oh, yes, John Lennon's "Power to the People" was playing as I ate my ramen.  Right on, Leo!