Oo-longing For Udon at Oolong Noodles 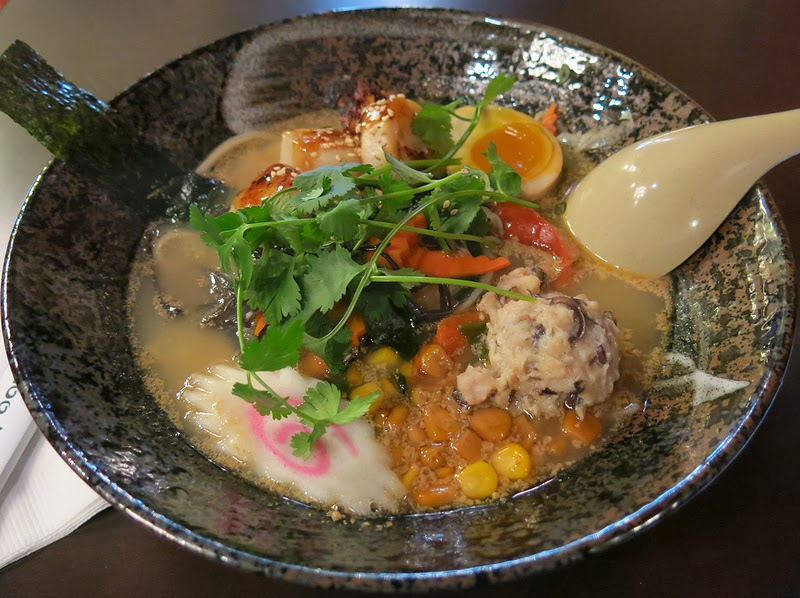 A little pan-Asian schizophrenia is to be expected at the premises of 636 Washington Street.  Fifty years ago it was an elaborately appointed Japanese restaurant (whose name I have forgotten*), which later morphed into a "Manchurian" Chinese restaurant with a Japanese name (Ryumon) and mostly the same Japanese decor.  Later it became very emphatically "Louie's California Chinese Cuisine," though it failed to exorcist all the architectural and visual ghosts of its Japanese past. Failing to emerge from the shadows of the City College high-rise construction it changed hands again and, at the end of December, emerged as "Oolong Noodles," with colorful signs promising "Chinese-Style Ramen."

As I circled around this new restaurant's emergence wondering what "Oolong Noodles" and "Chinese Style Ramen" were, the mystery began to unravel.  A little research revealed that the owner of record is apparently the same person as the owner of Kaka Udon Kitchen on Franklin St. (where I'd had a not-too-successful bowl of udon in the past). Armed with that hint, I further discovered that the Chinese name for the restaurant (烏龍麵, wu long mian) is an alternative Chinese translation to 烏冬麵 (wu dong mian) for "udon noodles." Adding in the fact that the noodle dishes are book-ended on the menu by sushi and Japanese grill items, the mystery evaporates: Oolong Noodles is pretty much a straight-up udon house

I approached the menu at Oolong Noodles warily, after my less than salutory experience at its sister establishment, but was pleasantly surprised. The score or so of hand-made "specialty noodles" ($7.50-$10.50 per bowl) featured creative-sounding toppings that were a far cry from formulaic ramen offerings.  From these I chose "Hokkaido Scallops Noodle Soup."  When they arrived, about 10 minutes later, the udon noodles were perfectly chewy.  From their uneven width, it was apparent that these were, in fact, hand made. Indeed, as I arrived just after 2:00 PM two noodle makers were cleaning up from their lunch service efforts in the noodle station in the front window. 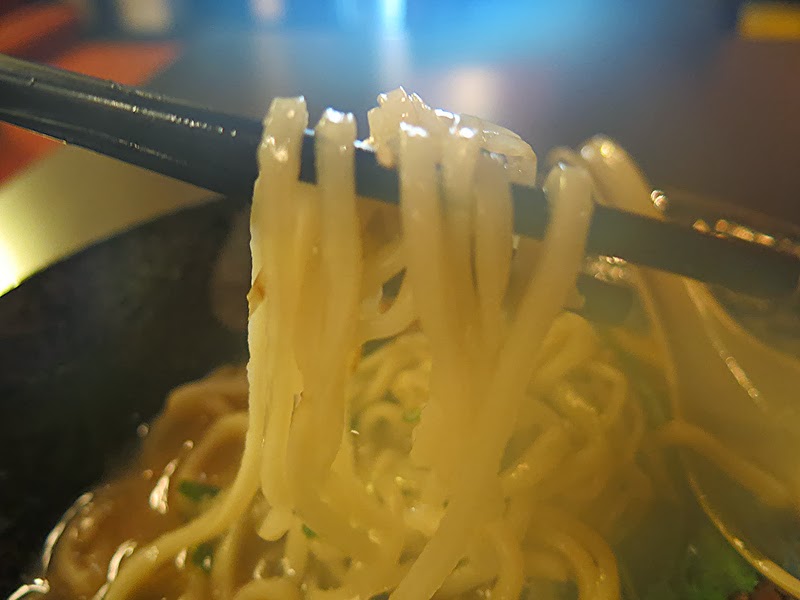 The broth in my udon was both slightly sweet and slightly salty (but not in an objectionable way), complex and rich. The major fault with the broth was that there wasn't enough of it. There were about six medium-size grilled scallops accompanied by a porkish meat ball of some sort, half a boiled egg and a plenitude of corn kernels and cilantro. And oh, yes, the ubiquitous pink thing I don't want to remember the name of.  The cilantro was something I don't normally associate with Japanese soups, but consider de riguer for a good Chinese soup -- major strokes for that!

I'm not sure what accounts for the difference in my experiences at Kaka Udon and at Oolong Noodles. Better noodle maker or better chef at the latter?  Simply a bad day at the former?  I've put Kaka out of my mind (hey, maybe it's that name). It's out of my neighborhood to begin with. But I'll be back at Oolong Noodles, oo-longing for more udon.

*A friend who worked there while in high school reminded me the name of the Japanese restaurant was Momokuri (no relation to the Momokuri sake bar of later vintage).

I have a distant ancestor named Samuel Wildbore.  I don't know the derivation of his name, but bumping into him in the course of some rainy day genealogical research today reminded me that I had yet to try M. Y. China's Wild Boar Scissor Cut Noodles, recently included in 7X7SF's The Big Eat 2014 bucket list of "100 things to eat before you die."

Thanks to the rainy weather and the earliness of the hour, I had no trouble getting a counter seat by the noodle station at M. Y. China and ordered the aforesaid noodle dish, an order of "Spicy Seafood Dumplings" (M. Y. China's take on Sichuan's "dumplings in chili oil") and a Speakeasy Red Rye Ale before sitting back and watching the ladies and gents in the open kitchen doing their noodle and dumpling things.  Martin Yan's flagship may be a bit up-market and the waitstaff a little too solicitous to my taste, but the long counter is a great place to kick back and contemplate, then enjoy, some of the best noodles this side of the South China Sea. 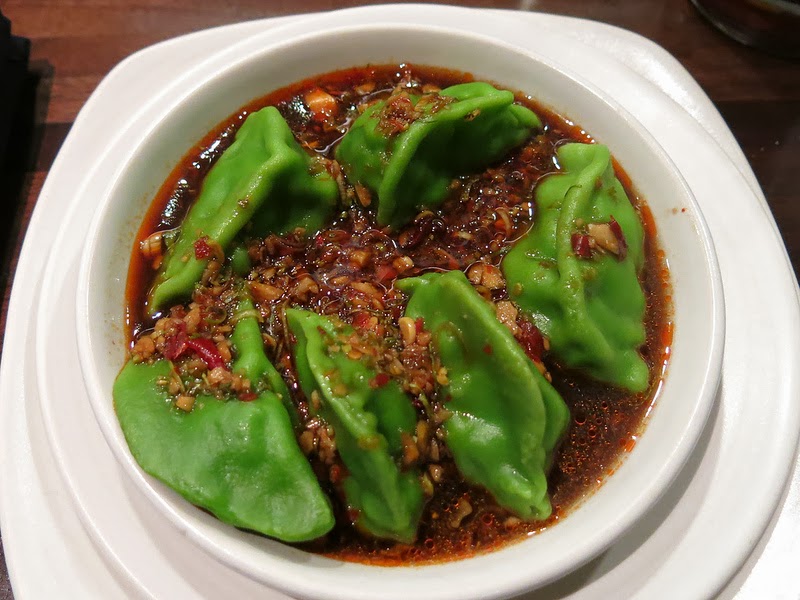 My spicy seafood dumplings were full of crunchy scallops and shrimp and had spinach wrappers, as promised by the menu, that were of an unnaturally fluorescent jade green. The "ma la" sauce (as the Chinese menu had it) was not particularly "ma" nor "la" but a nice, mildly spicy counterpoint to the sweetness of the seafood filling.

My noodle dish, when it arrived, seemed slightly undersized, portion-wise, but that was more illusory than real.  The dense, meaty scissor-cut noodles were very filling, as became obvious from the first bite. As I've come to expect from M. Y. China's noodles, they were a fresh, chewy delight, and the rough shreds of wild boar, cut to match the noodles in thickness, augmented the impression of great substance to the dish, even though there wasn't an overly-generous portion of the meat.

Was this my favorite M. Y. China noodle dish to date? Not quite. I found the saucing (this is a stir-fried or, more precisely, a "stir braised" dish) a bit on the bland side, and possessed of a needless starchiness. Abetted by some crunchy beansprouts, the overall impression of this was not unlike a Cantonese chow fun dish, albeit with more sinewy wheaten noodles (and, of course pork instead of the customary beef). Make no mistake, the wild boar scissor-cut noodles is a very good dish of noodles, but if I were one of those 7X7 guys I would have picked M.Y. China's Taiwanese-ish hand-pulled beef noodle soup over it. But stay tuned; there are more noodle dishes on M. Y. China's menu for me to try, including an actual chow fun.

As for the Wildbores in my family tree, the name eventually morphed to "Wilbore" and finally "Wilbur," which may have caught the ear of a more refined porcine creature who decided to use it as his name. Call me a cannibal, Charlotte, but I'd find just the right comfy caja China for that porker. 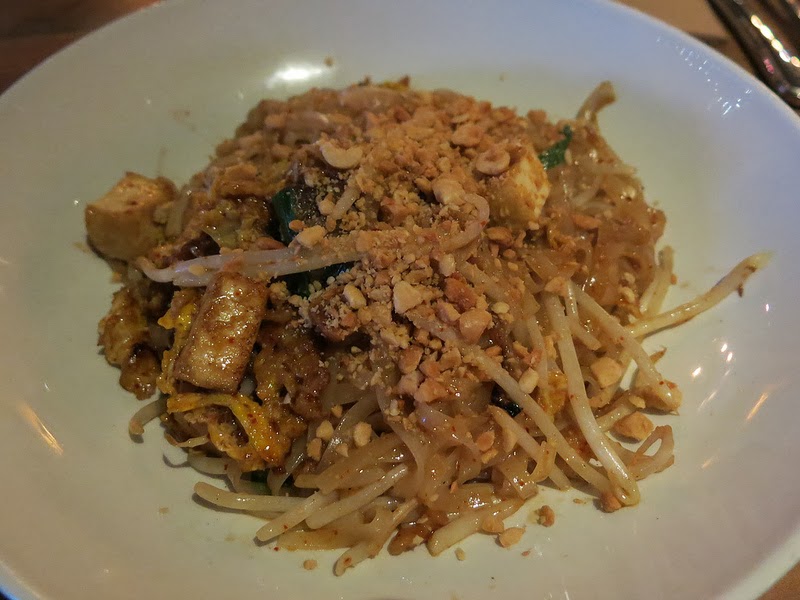 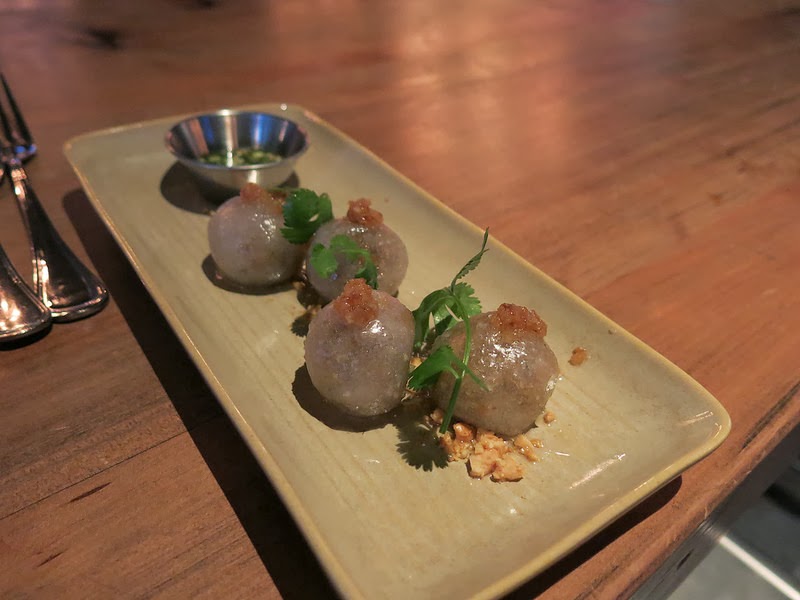