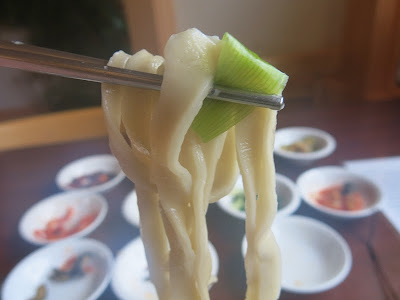 To Hyang, the modest family-style Korean restaurant on Geary Boulevard, has been on my list to visit for some time. After all, it's been praised to the skies by everyone from my own acquaintances (including the irrepressible Al Cheng) to the Rajahs of Real Food like the Messrs. Bourdain and Zimmern. What's taken me so long is that I do most of my gustatorial field work at lunch time and To Hyang has no lunch service; for another thing, I generally fly solo and it's as hard to put together a meal for one at a Korean Restaurant as it is at a Chinese Restaurant, and there are no "over rice" specials here. I was pleased, therefore, when I perused To Hyang's menu online and discovered that it contained what appeared to be a worthy destination bowl of noodles, a Korean specialty known as Kalguksu, with  in-house hand-made knife-cut noodles. That, my friends, is how I roll.. 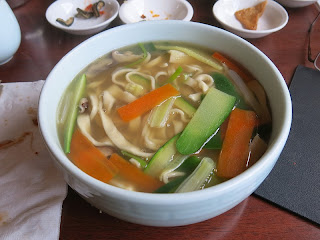 Kalguksu, literally "knife noodles," according to Wikipedia, is considered a summer specialty, and features fresh vegetables, most often zucchini (as is the case with To Hyang's version) in a rich, complex, slow-simmered broth. To Hyang's savory, but not spicy, broth is made from anchovies, kelp, dried pollock, green onions and a few more ingredients. Some traditional versions use shellfish, but To Hyang's does not, which will come as good news to some of my friends.  The real stars of the dish, as far as I am concerned, are the noodles themselves. Made from just wheat flour and water, they are both thick and wide, irregularly knife cut, muscular and chewy from start to finish. It's a bowl of noodles which, though meatless and containing only razor thin slices of vegetables, will make you feel like you've eaten a meal. 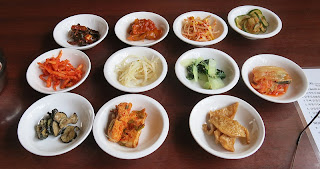 To Hyang's Kalguksu is $10.95, and if you think that is pricey for a bowl of noodles with no meat, think again. In true Korean style, it comes with banchan service, and my banchan came with (count 'em) eleven little dishes of delicious house made pickles. Your bowl of Kalguksu also comes with a lot of hard work and love.