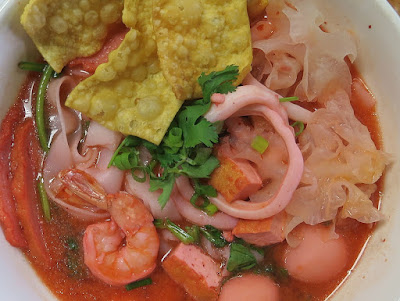 There's something jarring about the Thai noodle soup dish Yen Ta Fo, and I think it has to with the way the unnatural pink color of the broth seems to magnify its dominant sweetness. Having gotten to know it, it's not one of my favorite soups, but curiosity and my blog demand that I experience this eccentric soup from the hands of the best Thai noodle soup mongers I know of; noodlesse oblige, one might say. And who knows, I might experience a revelation.

Having previously sampled the yen ta fo from Lers Ros Thai and House of Thai, I made it an excuse for returning to Kyu 3 Noodles & BBQ today, where it's listed on the menu as Yen Ta Pho (which it certainly is not). 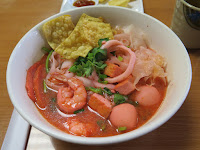 As noted in earlier posts, yen ta fo is known for its plenitude of seafood ingredients, as well as the pink-to-red color which results from use of tofu that has as been preserved with red rice yeast (sometimes assisted by Thai ketchup).  In Kyu 3's version, the broth was a paler pink in color and sweeter (even with my eyes closed) than either LRT's or HOT's. It was almost a DayGlo pink, a shade that would make a Ladurée macaron blush (but I hesitate to call it a macaron-y soup).

This hot pink bath was home to jumbo shrimp, fish balls, calamari rings, sliced fish cakes, cuttlefish and what appeared to be shredded jellyfish (but may not have been). It was like Hello Kitty meets cioppino, the famous San Francisco mixed-seafood chowder.  Topping it off (and providing some color contrast) were dark green water spinach and cilantro, and yellowish fried wonton skins. 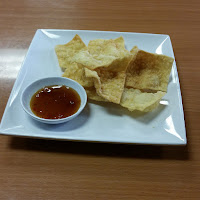 Compared to the versions at Lers Ros Thai and House of Thai, Kyu3's version was most similar to the latter's in the generosity of seafood inredients (and in broth color) but sweeter than either of the other two. I'd probably rank it third in preference, with Lers Ros' version first on account of its relative spiciness and lack of sweetness. I'me eager to try at least one more version of this dish, at Amphawa Thai Noodles, which so far has been the most spice-friendly of Thai noodle joints I have encountered.