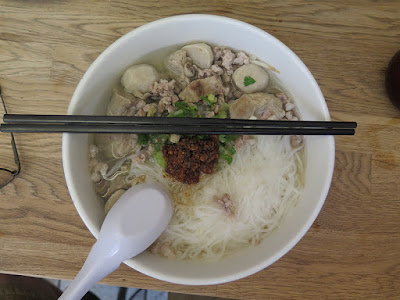 I don't think there's really any need to feel afraid strolling through the Tenderloin, but the surroundings can be a little grim at times.  Instead of whistling a happy tune, look for a cheerful antidote of your choice from the panoply of inexpensive and delicious ethnic fare to be found in the 'hood. One such dish is the one Thais would call kuay teow moo toon, known as "Pork Spare Ribs Noodle Soup" at Tycoon Thai, the welcoming O'Farrell St. Thai/Lao bistro with the excellent draft beer and dratted Mason jars. It's what I had today when I paid Tycoon Thai an overdue visit.

"Moo toon" is't something hummed by a cow, or even a cartoon of a cow. "Moo" (or something that sounds like it) means pork in Thai, and "toon" means steamed or stewed, and the two together usually refer to pork spare ribs.  Kuay teow (however it's spelled) means rice noodles. 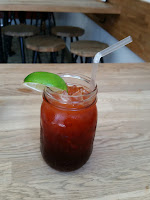 The broth used in kuay teow moo toon is a clear broth, subtly flavored, traditionally using cinnamon in the stock; if Tyoon Thai's broth has cinnamon in it, it''s thankfully so subtle I couldn't detect it; you Cinnabon dweebs can go away. Mild and vaguely medicinal, it benefited from a hit of chili paste. Although pork ribs are present, there's also pork pate meatballs and coarse ground pork as well; it could be called "pork three ways." The pork spare ribs were on the bone, but easily de-boned in the mouth.

If I had a complaint, it would be about too many noodles.  That's a complaint I rarely make (and would never make about hand-pulled wheat noodles) but there was such a mass of rice noodles it was difficult to stir in my choice of flavor enhancers from the condiment caddy.  But soldier on I did, and put the finishing touches on a hearty and satisfying bowl of happy moo toon noodle soup. 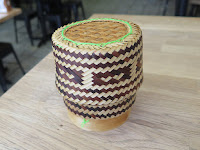 Accompanying my soup was a container of  sticky rice, which I can't resist ordering these days. Tycoon Thai doesn't provide jaeow bong (Lao chili paste) for dipping, so I mad do with a puddle of Chinese-style chili paste for this purpose.