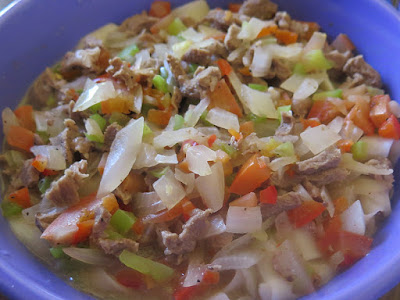 According to some accounts Naren, the name for the Xinjiang Uyghur dish that was my soup du jour today, means "meat eaten with the hands" (the Chinese characters 纳仁 used to render the name are apparently mere phonetics). Roughly chopped mutton, tomato, carrots, and onions were traditionally mixed with handmade flat, wide noodles and eaten with the hands (sounds messy but fun, doesn't it?). The broth the mutton and vegetables were cooked in was served in a dish on the side. 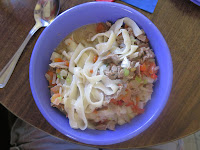 That was then. This is now. Forks and spoons have replaced sticky fingers and the dish I had today at Uyghur Taamliri was all-in-one.  Toothsome hand-pulled noodles sat in a shallow pond of mutton broth, and were topped with a mixture of chopped mutton (or lamb), tomatoes, onions and bell peppers.  In traditional style, only salt is used in cooking the mutton, in order to keep the natural flavors, and black or white pepper added just before composing the dish to add a little personality. I can't confirm that Uyghur Taamliri stuck to this protocol, but the broth was very meaty and peppery from white pepper; with the meat, rustic noodles and familiar veggies, the overall effect was not unlike a Scotch Broth soup. 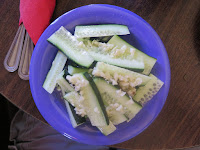 I couldn't let all the raw onions get by me without pairing them with fresh garlic, so I ordered an appetizer of "Mashed Garlic Cucumber."  It was as tasty as it was simple, just pressed fresh garlic and cucumber spears with a vinegary dressing, perfect for the 80+ degree day it was today.

As for my naren, one of the fragments of folkish wisdom I garnered from various sources was this proclamation: "It is the faverite dish of old people." This septuagenarian wouldn't argue with that sentiment.