Shandong Deluxe Opens Sister Restaurant On Geary; Will It Be Bested By San Dong Best? 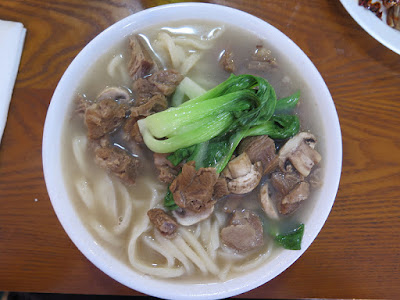 I walked in through the open door past the tiki-ish entryway to the newly remodeled San Dong Best restaurant that was formerly Xi An Gourmet (nee San Dong House). "We're not really open yet," said the young male server who greeted me. "But you can order something anyway." There were a couple of other tables with eaters at 2:00 in the afternoon, and I realized I had stumbled into a "friends and family" soft opening. 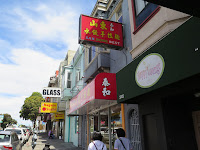 From the outset of the restaurant's "Closed For Vacation" remodel I had assumed it was the same owners jettisoning the "Xi'an" aspects of the menu and going back to their Shandong basics (which they covered well) but I was wrong, as I would have realized if I had paid more attention to the Chinese name on the new awning. When the waiter returned with a menu, it was a paper menu from Shandong Deluxe, the three-year old restaurant on Taraval St. which I had made several visits to in the past. Indeed, as I discovered when I walked outside and peered at the signage, the two have the same name in Chinese as well as the same color scheme on the awning.

"Opening day is Monday," said the server, "we'll have new menus then." The menu at San Dong Best will include all, or nearly all of the dishes on the Taraval St. menu (including the Xinjiang dishes, he said) and more. My guess is that at this inner Richmond location, a couple of doors from the fusion-ish new Fajitas Restaurant, they'll be aiming for a slightly more up-market dinner crowd, and I'm eager to see what they come up with for new Shandong-style entrees. 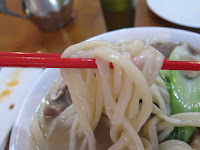 As for my eats today, I ended up ordering the same dish I inaugurated Shandong Deluxe with, the "plain broth" lamb noodles, though I requested wider noodles this time around.  It  turned out to be nearly identical to the dish I had had in 2012, a subtle, meat-infused broth (possibly born of pork bones) that was neither particularly medicinal nor spicy, just comfortingly unctuous, as lamb soups are wont to be. The noodles were excellent, wabe and chewy (and not skimped on).  A couple of the tender lamb chunks had collars of fat on them, but nearly as much as I would like. There were quite a few mushroom slices in the broth, and the obligatory pair of Shanghai bok choi stalks atop.  Ob balance, this was definitely an A-team bowl of noodles. 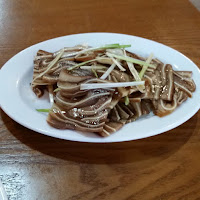 I accompanied my soup with an order of marinated pigs ears.  These were a disappointment compared to versions I have had elsewhere. They appeared to be a work in progress, pounded but only partially shredded and too chewy. The "marinade" had little character, and I ended up using a healthy dab of chili paste to get me halfway through the dish, at which time I gave up.


One mystery remains: why do they spell it "Shandong" in the Sunset and "San Dong" in the Richmond?