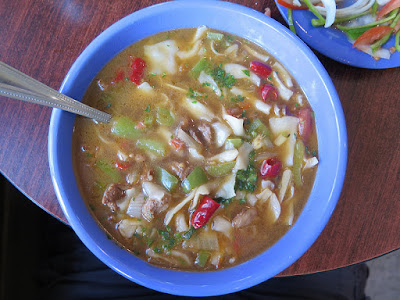 After discovering the new Uyghur-only restaurant in our town and checking out the laghman, I was only too eager to return Uyghur Taamliri and try the only noodle soup on the menu (and incidentally scarf down a couple of samsas).

The soup in question, with the nearly impenetrable name of Süiqaş, is described on the menu as "lamb, onion, potatoes, pepper with lamb soup pulling dough." It's listed in Chinese as tang fan (汤饭), literally "soup rice," which didn't seem to make sense, because the noodles would surely be made of wheat.

Some assiduous Googling and sleuthing of alternative transliterations finally led me to the realization that Süiqaş is most likely a contraction of  suyuq ash (suyuq'ash) which, according to one source, means " 'liquid food', such as noodles in a soup." According to another source, "The Uighur suiqaš (< suyuq-aš)

The noodles in my Süiqaş were irregular-shaped approximately half-inch squares which apparently were torn from a "sheet" (like Chinese man pian) or wide strip, rather than pulled like la mian. (They are not to be confused with the smaller, chopped square noodles in Xinjiang ding ding chao mian.) The soup was so thick with noodles it could indeed be considered a "liquid meal" (got that, Kenny Bania?). Lean, tender, roughly minced lamb sat in a hearty broth that was thicker (from potato?) but less fatty than the Şorpa from my previous visit.  The "peppers" mentioned in the menu description included chili peppers as well as bell peppers, and the server asked me how spicy I liked it. I said "very," but that is a relative term and, as you might guess, it wan't very "very." It was, however, pleasantly spicy and overall a soup that Kenny Bania would have loved, as did I.

I accompanied my süiqaş with two samsas and a salad listed on the menu as Pi-La-Hong. The samsas (empanada-like little meat pies) appeared to be pan-baked (pub kitchens in San Francisco are unlikely to contain cylindrical stone ovens). I found the wrappers to be a little oily and un-yielding; with a savory lamb filling they were tasty enough, but not likely to make you forget the ones you can find on a street corner in almost any Chinese city. The "Pi-La-Hong" was translated to Chinese as "Xinjiang Tiger Vegetables" (akin to the Shaanxi dish with a similar name). Carl, the operator/server confirmed that the name was the same in Uyghur. There was nothing exotic about it, just fresh, crunchy slivers of onion and red and green bell peppers (alas no cilantro) in a sesame vinaigrette, but for $4 who's to complain?
Where slurped: Uyghur Taamliri, 1849 Lincoln Way, San Francisco