Coincidence Or Cosmic Synchronicity? My Summer Mutton Noodles At Shandong Deluxe On The Eve Of "Da Shu"


The Chinese Agricultural (Solar) Calendar is divided into 24 half-month periods, with the hottest, Da Shu ("Major Heat") beginning this year on July 23.  There are different eating practices in different parts of China for this period, as shown in the above infografic: "People in Shandong drink mutton soup on Major Heat, which is called 'Summer Mutton Soup.' " Fitting, therefore, that I was sitting in a resaturant called Shandong Deluxe slurping mutton soup on July 22, the eve of "Major Heat" (actually already the 23rd in China). I'd like to think this demonstrates an intricate knowledge of Chinese customs, but in truth my visit was completely random, and I was unaware of the mutton-eating custom until I was doing some post-mortem research. 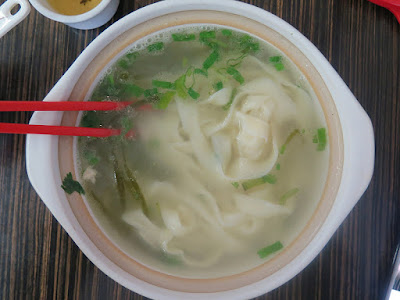 I had started out headed for the Uighur restaurant on Lincoln Way, but Muni and I were both running late, and I would have arrived at about 1:55 for the 11:00-2:00 lunch service. Not wanting to cut into the staff's chill time, I stayed on the #28 all the way to Taraval St. after deciding to make House of Pancakes Plan B. House of Pancakes, alas, is closed on Wednesdays as I had once discovered before (fool me twice, shame on me). Plan C was a no-brainer: Shandong Deluxe and its hand-pulled noodles, a block away. 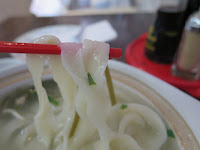 No divine guidance was involved in my choice of mutton noodles: unless purpose-sent to try a different soup, I'll always go for a mutton or lamb option if avaiable, and the fact that they specified "mutton" and not "lamb" (the two have the same name in Chinese but not always distinguished on menus) was also a turn-on. I could envision wide, flat, wide, hand-pulled noodles in a milky, somewhat medicinal broth, with fatty chunks of mutton --- but wait, that was the Henan place in Flushing's Golden Mall; would I get something like it?

The flat, wide, hand-pulled noodles were the best part of my large bowl (nay, tureen) of mutton soup.  The milky broth was less medicinal-tasting than I expected and on the bland side, but easily remediable via the condiments supplied to the table.  My soup also seemed a bit skimpy on the mutton, coming with what you might call China-sized portions (China of the 1990s, that is) of meat. Not to complain, though; it may not have been quite the Henan wonder from Flushing, but price-wise and portion-wise, my "Summer Mutton Noodles" delivered great value.