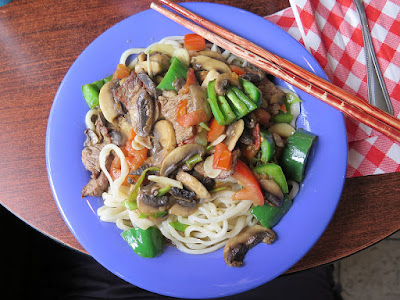 Getting wind that a new dedicated Uyghur restaurant -- San Francisco's only such establishment --- was up and running in the Sunset, I hightailed it to 20th and Lincoln Way for lunch today to check it out.

The restaurant is  Uyghur Taamliri -- Central Asian Uyghur Food but don't strain your eyes looking for a sign, as there is none as of yet, even though it's been open for  few days.*  It's inside a tidy but inconspicuous  pub called Chug Pub, and even once in the door the only signs you are in a restaurant is a stack of menus and a warm greeting from Carl.

Carl is the American name of the young Uyghur from Xinjiang who created Uyghur Taamliri ("Uyghur cuisine").  He rented the restaurant's kitchen from the pub owner, a personal friend, and installed his father, who had cooked in Xinjiang, as chef.  Uyghur Taamliri's menu as of now is quite limited, but it's full of hard-core Xinjiang/Kazakhstan food, with no padding with pan-Chinese favorites.  It's casual, hearty, meaty, stick-to-the-ribs (and presumably halal) fare suitable to its surroundings; indeed, given the decor and high-stool seating, you can easily think of it Uyghur pub food.

I went there hell-bent on vetting the laghman, but Carl was so keen on recommending the Şorpa (a Kazakh lamb soup) I ended up ordering both.  (Fortunately, the plate dishes come in two sizes, so I was able to avoid over-stuffing myself by ordering the smaller-size laghman plate.)

Şorpa, said to be a specialty of Kazakhstan, is rich lamb broth containing large chunks of lamb (neck?) both on and off the bone, as well as onion, potatoes, carrot and parsley, per the menu.  I also detected cilantro in mine.  The  broth is quite fatty, though it's a comforting fattiness from lamb fat, which happens to be my second favorite fat after duck fat. It's definitely a tonic for the flu or a head cold, or just the blahs; Xinjiang pencillin, you might say.

Laghman is a hand-pulled noodle dish (the name is Uyghur for la mian), which is served as a "dry" (i.e. sauced, not in soup) noodle dish. At Uyghur Taamliri you get a choice of beef, chicken, or lamb with noodles (hand-pulled by Carl's father), onion and garlic.  There are also vegetable "options" including "green pepper, red pepper, tomato, celery, Chinese cabbage potato, mushroom, black mushroom, oyster mushroom, black fungus, cowpea, eggs." Presumably one opts out, not in, as they all seemed to appear in my toppings.  As I've noted in other laghman discussions, the flavors in this dishare a a lot more suggestive of near Asian or Mediterranean cuisine than Chinese cuisine, and Uyghur Taamliri's was no different it this regard.  It had a soupçon of spice heat, which made it more enjoyable than the last one I had (at Shandong Deluxe). Overall, it reminded me of my first laghman, at Cafe Kashkar in Brooklyn several years ago, though I cannot recall its degree of spiciness.

*A chowhound.com poster informed me that there IS a sign on the 20th Ave. side of the building which I missed.