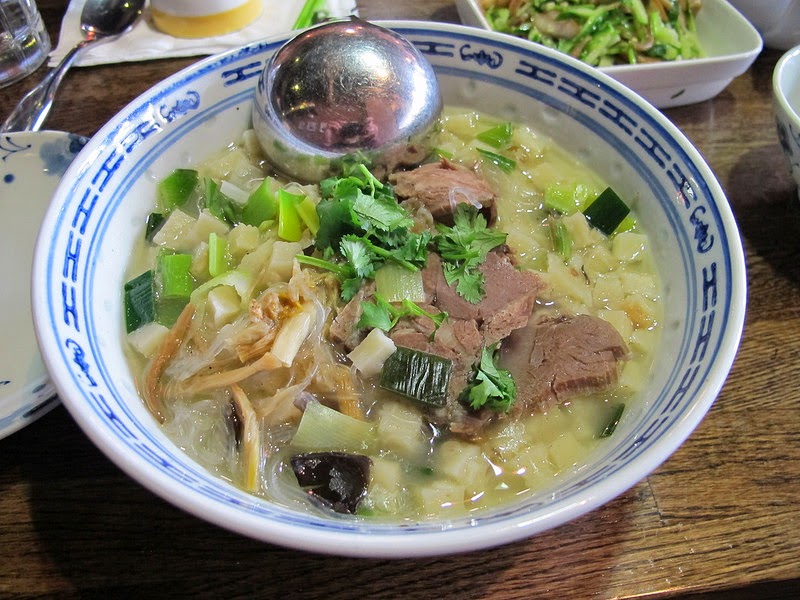 With a trip to New York on the horizon, it struck me as a good idea to triangulate the essences of some classic Xi'an foods by comparing the versions at San Francisco's two new shining stars of Shaanxi cuisine, Xi An Gourmet and Terra Cotta Warrior, and revisiting the same dishes at the place I came to love Xi'an food, Xi'an Famous Foods in Flushing, Queens.  This, at least, was my rationale for stuffing my gut at lunchtime two days running with Xi'an's most substantial comfort food, yangrou paomo.

Yangrou paomo is a stew of lamb or mutton (yangrou) in a broth with bean thread noodles to which is added a copious quantity of crumbled or chopped flatbread (mo) to soak (pao). POW! The bread used is a skillet bread identical to the bread that puts the "mo" in rouiamo, "Chinese hamburgers." On English menus it is often referred to as "pita bread" but is in fact much more substantial. Traditionally, the bread is broken in pieces into a bowl by the eater, and the cook then adds the soup and meat to fill the bowl.  To simplify matters (and to dodge some tricky hygiene issues) the bread pieces (chopped, not crumbled) are usually added to the stew in the kitchen nowadays.* More that a brutally simple stew, crushed cardamom, onion, "wood ear" fungus, cassia bark and cilantro are other ingredients you might find in it.

First up on my trials was the yangrou paomo at Terra Cotta Warrior on Judah, accompanied by an appetizer of "garlic taste pig's ear" (which tasted more of cucumber than garlic).  The following day I indulged at Xi An Gourmet in the Richmond, accompanying my paomo with an order of "celery with bean skin" (tofu skin).  Following is my impression of the two versions of yangrou paomo in San Francisco.  The one I had at Xi'an Famous Foods was six years ago, so I'll wait until I revisit it to toss my impressions in the hopper.

In Shaanxi, yangrou paomao is typically served with pickled garlic and chili paste on the side.  That was not the case here, though both restaurants (like nearly all Chinese restaurants) have chili paste available to the diner.  At Terra Cotta Warrior, the garlic seemed to be more positively integrated into the soup. In fact, the stew's broth seemed more complex, with more notes than at Xi An Gourmet, which featured a more monochromatic broth.

Perhaps the most striking difference between the two versions was in the relative proportions of mo (bread) and bean thread noodles. As is evident from the photos, Terra Cotta Warrior's was so full of diced flatbread they peeked above the surface, and there seemed only a token amount of the noodles. This was completely reversed at Xi An Gourmet, whose soup was loaded with the bean threads and held a relatively puny portion of bread cubes. (Though not evident from the pictures, Xi An Gourmet's yangrou paomo came it a distinctively larger bowl, with broth filling up most of the extra capacity).

In Xi An Gourmet's favor is the fact that their version came with substantially more lamb.  What you can see in the the Terra Cotta Warrior photo is basically what I got, lamb slices arrayed on top as in bowl of ramen. Xi An Gourmet's bowl had several large and very thick chunks, so large that I had to break them up with chopsticks and spoon to eat them comfortably.  They seemed fattier, too, and therefore more tasty.

Overall, the two versions of yangrou paomo ($8.25 at both locations) seem reflective of their establishments, with the somewhat more elegant Terra Cotta Warrior offering what appears to be up a more "finished" example of the classic. On the other hand, if you're looking for sustenance and LOTSA MEAT, then a trip to the more proletarian-feeling Xi An Gourmet is mo' better.

*Both restaurants now offer a version of yangrou paomo with the flatbread on the side for the DIYer. No word on whether signing a waiver is required.