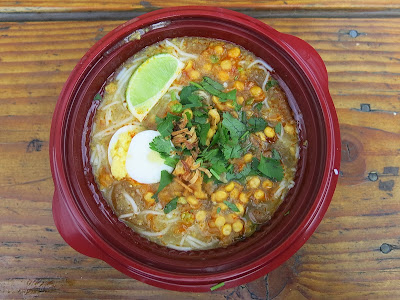 I decided to begin a new noodle year with mohinga, the rice noodle catfish chowder that is the national dish of Burma, from the Lil Burma food truck at the SoMa StrEat Food Park, where people were partying at lunchtime like it was 2014. I'd had mohinga from them before, but for a number of reasons (beyond the fact that it is tasty and good pun material) decided on a repeat. 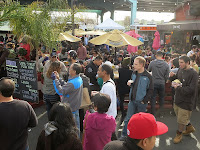 For one thing, I needed a new picture of it for a blog post later this year surveying the eight versions of mohinga available in San Francisco; my previous sampling from Lil Burma was when they'd first launched their truck and were serving mohinga in a cylindrical clear plastic to-go soup container. They're now using bowl-shaped disposable containers which not only make the soup more photogenic, but also provide a better eating experience.

Secondly, it seemed appropriate to toast the New Year with something Burmese because 2014 may prove to be the year of the Burmese noodle for me. After chasing down four more bowls of local moginga soups, I plan to do a similar overview of eight versions of Burmese ohn no khao swe (coconut curry chicken noodle soup) available in San Francisco, and also sneak across the culinary border to Thai restaurants serving the Burmese-inspired but Thai khao soi. 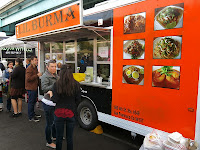 Finally, I was there to celebrate Thomas and Lewis Eng's achieving permanent residence status -- for their food truck, that is. As of January 1, Lil Burma has become an "anchor" tenant of the street food park, parked there permanently and available for lunch and dinner 7 days a week. Thomas and Lewis intend to take advantage of this stability to begin rotating new specials in and out of the menu. They are promising Burmese biryanis, samusas, and new salads (including, if I can lean on them hard enough, a yellow tofu salad).

But I'll never stray too far from their hearty mohinga.