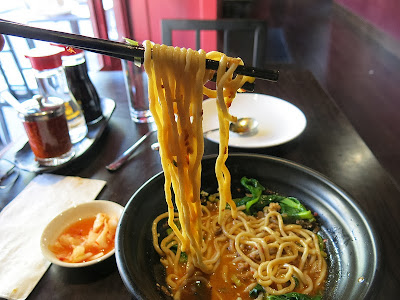 The new Little Szechuan Restaurant is anything but little, and its (also not so little) menu isn't exactly dominated by Sichuan cuisine. Little Szechuan occupies the all-but-cavernous two-level former premises of the Impala Lounge at the corner of Kearny St. and Broadway (abreast of the topless joints), complete with the first-floor bar bar and sidewalk seating. It does have a chef from Chengdu, but its 250+ item menu is a mashup of echt Sichuanese, Dongbei, Shanghainese, Hong Kong-Cantonese and Early American-Chinese cuisines. You can have your egg foo young, for example, with a big bowl of spicy duck blood and tripe soup and sides of beef pancake and xiao long bao, and wash it all down with a glass of Hong Kong-style milk tea. But I'm a noodle guy and I was there to vet the dan dan noodles.

Service was prompt (not surprisingly, as I was the only customer  at 1:30) and began with a complimentary dish of kimchi and a glass of cold water accompanying the menus.  "You speak Chinese!" exclaimed Nicki, the pleasant server when I ordered both the dan dan noodles and a side of wontons in chili oil by their Chinese names. "Not exactly," I said. "I eat a lot" (as if that made any sense).

My dan dan mian came attractively plated (bowled?) with a bit of a vertical cuisine flourish (which I promptly undid by stirring the noodles with the sauce beneath).  The robust alkaline noodles were decently chewy, teetering perhaps on the brink of softness; they never did make the leap, though I would have preferred that they teetered the other way.  The sauce was not so successful.  For one thing, there was too much of it -- by the time I finished my bowl, I felt that I was having a soup dish, not a "dry" noodle dish.  It also wasn't thick enough to make the gritty elements adhere to the noodles.  Finally, I felt the sauce was underspiced. (Yes, there was a jar of chili paste on my condiment tray, but I was trying to follow the chef's default spicing through to the end). 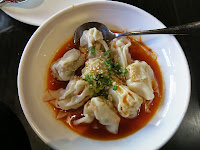 Saucing also seemed to be the problem with the hong you chao shou (wontons in chili oil). The wonton's wading pool seemed to lack sharpness, and appeared to have been slightly thickened with starch, which accentuated the blandness. The wontons also appeared to be lacking in garnish.

A lot of work has obviously gone into bringing Little Szechuan to fruition and I'd love to see it succeed. It will be a daunting task to fill the seats in a place of this size in a slightly iffy area on the strength of its food alone. Perhaps it will become a "scene," attracting graduates of the Irving & 21st boba joints with its varied fare and its liquor license.

Maybe the best case scenario is that it will bring a better class of drunks to my neighborhood. 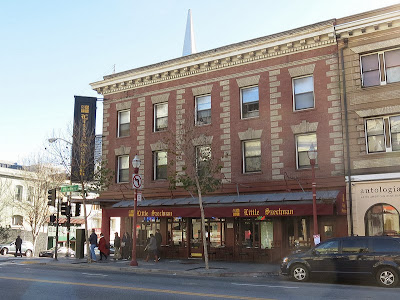