Lapping Up The Kao Piak At Maneelap: Chicken Soup For The Noodle Lover Soul 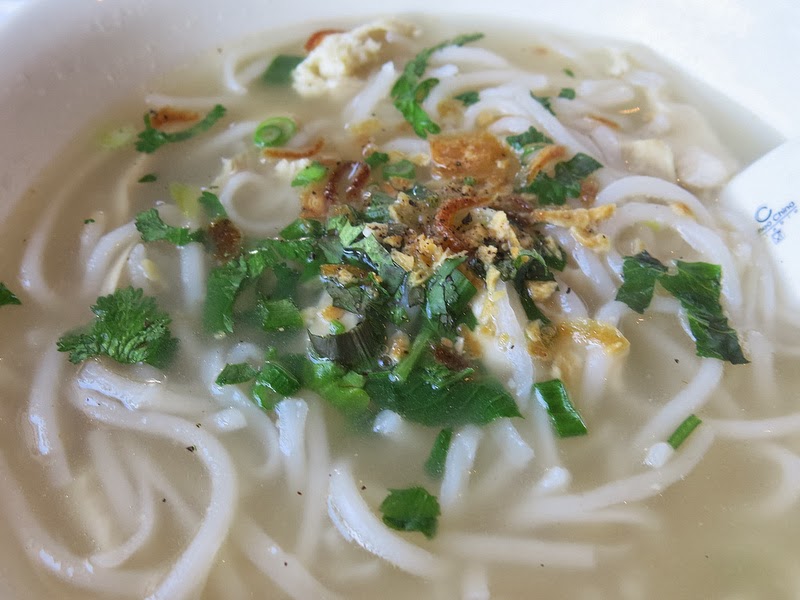 I considered my return trip to Maneelap Srimangkoun Restaurant today to be both a chance to sample the second of two Lao noodle soup specialties on offer there (khao piak sien, listed as kao piak on the menu) as well as something of a sideways tribute to the Campbell Soup Company, which is celebrating the 80th anniversary of Campbell's Chicken Noodle Soup.

In 1934 Campbell's made the discovery that chicken soup and noodles make an awesome combination, and rightly figured that if they put this combination in a can, the World (or at least the U.S. and Canada) would beat a path to their door.  Approximately 10  years after this culinary (and marketing) breakthrough, they provided me with my first ever encounter with noodle soup (and possibly even one of my first solid foods).  Little did they (or I) know that some 70 years later I would be blogging about chicken noodle soups with very distant origins (but not so very distant flavor aspirations from the red and white can with 32 feet of noodles inside).

In recounting my first experience with khao pian sien (a.k.a. kaow paik) at Champa Garden, I noted that it was not so different from a chicken soup my very American farm-wife grandmother would have made (though she'd have put dumplings, not noodles in it). The same could be said of Maneelap's version.  Described on the menu as "Home-made rice noodles with bone-in chicken soup," it featured a broth that was less rich but cleaner in taste than Champa Garden's version, more akin to a pho ga broth with less sharpness in the spicing and milky from tapioca flour. Galangal and lemongrass were likely seasonings, though chicken-ness was lord and master of the broth.  What Lao cooks (as well as Vietnamese cooks and even Campbell Soup Company lab technicians) have learned is that the broth rendered from the carcass of a chicken is already close to soul-satisfying perfection and will countenance only the most light-handed flavor tinkering.  Maneelap Srimangkoun's kao piak was filled with chewy hand-made noodles (slightly less thick than Champa Garden's) and garnished with cilantro and shallots. 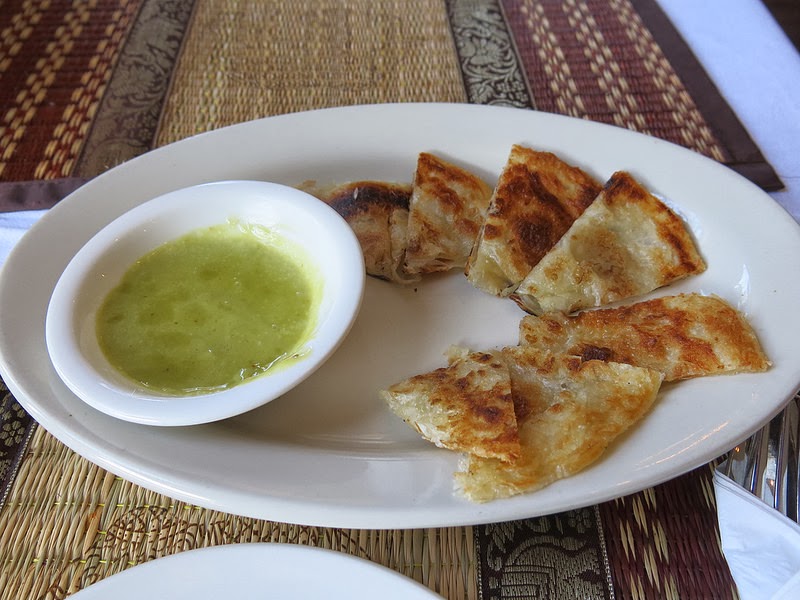 My kao piak arrived accompanied by the obligatory condiment caddy containing jars of fish sauce, chili sauces and other seasonings, and I asked the Lao server what was best to add. She responded that she didn't add any, because the broth was already so delicious. I followed her lead (apart from a little tinkering with the last of my broth) and did not regret it. Chicken soup is chicken soup is chicken soup.

I accompanied my soup with a side order of roti (from the "Thai Appetizers" section of the menu). The roti itself was nothing special, but the green curry dipping sauce it came with was superb.