Ramen Yamadaya's 20-Hour Tonkotsu Ramen: Not Too Rich For My Blood 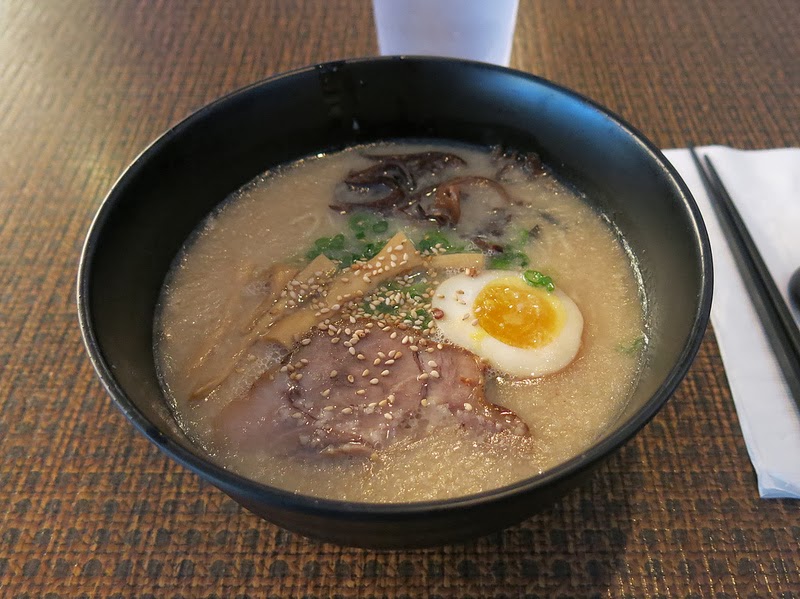 I've alluded before to my inability or unwillingness to fully embrace ramen culture, for a number of reasons – noodles that lack robustness, broths that tend to be too salty and/or muddy for my tastes, and toppings so skimpy as to provide the purveyors an opportunity to nickel and dime you to death for add-ins. Add to this the assault on my sense of value by hipster ramen-makers who have raised the ante by charging their cohorts $14 for a bowl with the World's Greatest Ramen Broth that they perfected over Spring break just last year, and you'll shed a tear for me. Or not.

On the other hand, there is something endearing about a ramen-ya. Like a pho joint, its sole purpose is to provide you with a bowl of noodles. (I can only dream about Chinese style mian guans dotting the landscape the way those two do.)

In this light, I've been eager to check out Ramen Yamadaya from the day they didn't open on the day they were supposed to open in the old Iroha space on the Buchanan St. Mall, and finally made it back there today. It's an outpost of a Los Angeles chain that ranks highly on local lists down there, and I was eager to see if L.A.'s noodle exports were more worthy than their burger exports. In addition, prices on their on-line menu seemed to be in the realm of reasonableness, though they need to add the caveat “prices slightly higher north of the Tehachapis.”

There was no wait at 1:45 when I arrived, even though the place is still lacking tables. (The whole cener of the room looked like a dance floor; I read somewhere they are planning to install communal tables.)  I ordered the house specialty, “20-Hour Tonkotsu Ramen” with no extra toppings, but with a side of gyoza, after determining that they are house-made, whereas the takoyaki on the menu start out frozen.

My ramen came in a medium-size bowl, though it was fuller than some larger bowls I've been served, and the broth-to-noodles ratio was salutory. The broth itself was rich in a restrained way, cloudy but without an overt fattiness, and had what I perceived as mushroom overtones. The noodles were of the finest variety (thickness-wise, that is) and retained their springiness and bite to the end. Toppings featured a couple of thin slices of meltingly tender chashu and half a soft-cooked egg; secondary toppings were minimal.

Service at Ramen Yamadaya was not without glitches, even though it's been open for almost three weeks.  I ordered hot tea, which is on the menu, but was told they were out of it. How can a Japanese restaurant be out of hot tea? Then came the comedy of the side dishes. I intially ordered takoyaki as a side, after being told by the server that they were house-made. After she returned to tell me they were, in fact, frozen and apologized for misinforming me, I ordered the gyoza, which she reassured me were indeed house-made. There were supposed to be six gyoza to an order, but when she served them, there were only four and she informed me I was still owed two. Eventually she delivered three more, so apparently I was comped one gyoza for my trouble. The gyozas weren't bad, so thank Heaven for small favors!

Overall, it was one of the better bowls of ramen I have had (though I would like fatter noodles), and it didn't cost me an arm and a leg. Ramen Yamadaya has somehow found a way to rein in the unctuousness of a rich broth, which I appreciated. (There's a kotteri version on the menu, if you are a glutton for punishment.)

L.A., send us more noodles. (But keep your burgers to yourself.)