Getting It Up For Some Khao Poon, The "Lao Laksa" From Maneelap Srimongkoun Restaurant 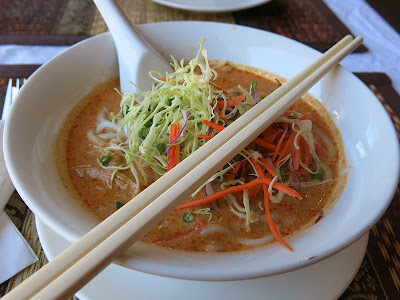 Maneelap Srimongkoun is a new Lao/Thai (or Thai/Lao) restaurant that opened on New Year's Day in the Excelsior district. A neon sign in the window announces "Laos Thai Restaurant" while signage above the door and text on the menu dubs it a "Thai and Laos" restaurant. The dual identity is, happily, more schizophrenia than fusion. Maneelap Srimongkoun serves Thai dishes AND Lao dishes, not mashups of the two cuisines. According to my server there today, the restaurant is the creation of her Lao mother and her Thai aunt, who previously worked together at a Thai restaurant and are intent on their dishes keeping their respective national identities. To avoid guesswork, the restaurant thoughtfully has the Lao specialties organized under a common heading on a separate page of the menu. I, the noodle nudnik,  was there to try a Lao noodle specialty, Khao Poon, due to its rarity (only one other restaurant in San Francisco serves Lao food that I am aware of) but that won't prevent me from returning to try the Thai dishes in the future.

As for the daunting restaurant name, my server told me Maneelap Srimongkoun is the name of a Lao monk known to the family who blessed the enterprise, albeit by telephone. 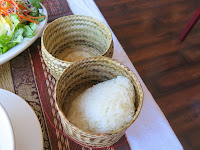 Khao poon (also spelled khao pun, khao bune or even kapong) is a Lao rice noodle soup which is sometimes called "Lao laksa" for its resemblance to a curry laksa. (It also, I might add, has similarities to a Burmese ohn no khao swe.) The version at Maneelap Srimongkoun is, technically, khao poon nam phik, meaning it is made with coconut milk; according to Wikipedia, there is also a version called khao poon nam jaew which is made without coconut milk. The version I had is described on the menu as "Laos' curry with coconut milk, blended stew, chicken meat served with vermicelli noodle." "Vermicelli" here is a bit of a misnomer, as the rice noodles were more of s spaghetti thickness, happily for me, as I like them that way.  They were quite chewy at the outset but softened slightly as I chomped my way through them, but never got to the mushy stage. The broth seemed quite complex, and most likely contained a number of typical Lao and Thai condiments.  It wasn't as rich as a curry laksa broth nor quite as spicy (but subject to adjustment, of course); on the other hand, it tasted cleaner (less muddy).  The topping of the bowl with a forest of finely shredded carrots and cabbage, along with cilantro. mint and lime made for the kind of textural contrasts you don't often find in a noodle soup, especially one traditionally eaten as a breakfast food.

I augmented my soup (which didn't contain a lot of protein) with an order of Sai Ooa (Lao Sausage), a generous portion accompanied by a raw veggie salad of sorts.  I found the sausage a little on the dry side, though the server said it can be served less dry on request.  I also added a side order of sticky rice. (Hey, this was Lao food, remember? And how often do I get to eat with my hands?) I used the rice to sop up some of the remaining broth in the bowl.

Overall, Maneelap Srimongkoun is a nice new ethnic food asset for San Francisco, family run, with friendly service and delicious food. If only it weren't eight miles from home 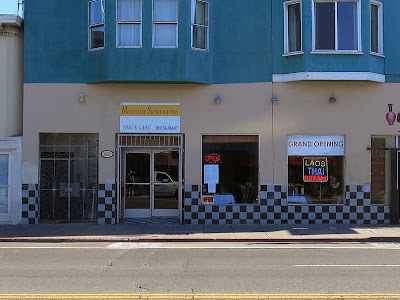