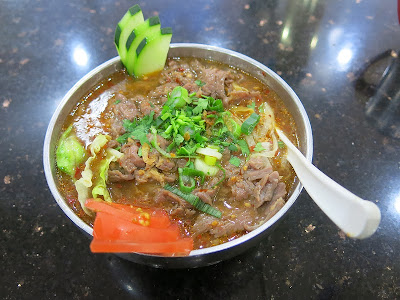 A chowhound.com thread on beef sate noodles lit a fire under me on this cold day and I hightailed it to San Sun Restaurant in Chinatown, for the first time in a long while. (Foursquare rudely informed me that it had been more than two years -- so much for eating locally.) In fact it was my first trip to San Sun since they moved to their smartly if coldly appointed new digs on Washington St. after being ousted from Stockton St. by Muni's Chinatown Subway project.

San Sun, which I dubbed "The House of 5,000 Noodles" because of all the possible DIY combinations on the menu, is especially noted for its sate noodles; there's a Malaysian spouse in the San Sun family mix, and the house-made sate sauce is so highly regarded it is bottled and sold from the restaurant.

It was the cold weather and my cold that triggered my San Sun run, and nothing seemed better for both than a spicy sate noodle soup.  The menu offers eight different sate soups, and I went for the basic "Sate Bo beef saday sauce noodle" as it's listed (also known as #42) on the menu. The server asked me for my noodle choice. "What's the best noodle for it?" I asked. She read my mind and came back with "wide egg noodle." It's what I would have ordered, but it was nice that my preference had the house's approval. Did I want it spicy? "Yes, definitely," I said. 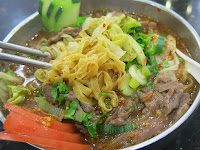 It's hard to imagine a better sate broth around than the one that came with my noodles at San Sun. It was respectably spicy, not face-meltingly so, nor so chile-laden as to overshadow its smoky background of peanuts, garlic and perhaps shrimp paste.  It was just the right consistency for a soup broth: not muddy at all, not something to dip your hotpot catches in. It enveloped a copious quantity of well-cooked egg noodles, which were topped with thinly sliced beef brisket which was as fresh as you'd expect in a good bowl of pho (San Sun is, after all, a Vietnamese restaurant).  It was garnished with fresh tomato and cucumber slices, as well as a typical scattering of onions and greenery which I was too busy attacking my noodles to catalog.

I've mentioned before that I have a habit of playing with the remaining broth at the bottom of my bowl, doctoring it with potions from the condiment caddy. No so the sate broth at San Sun, which I drank down as is; improving on it was certainly beyond my ken.