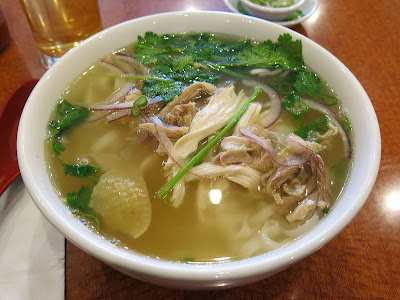 It was Christmas day and of course I could think of nothing more festive for lunch than a good bowl of noodles, so I headed for Chinatown. According to the grapevine,  Oolong Noodles had finally opened and featured a woman making noodles in the big picture window facing the street. When I got there, Oolong was open but looked deserted and the red bagnio drapes in the window were drawn shut.  I decided to defer my vetting of Oolong Nooodles until such time I could watch the goods being made, and headed around the corner to Joy Hing B.B.Q. Noodle House on Kearny St. 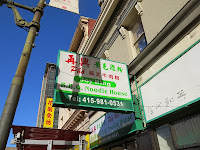 Joy Hing B.B.Q. Noodle house, like its erstwhile neighbor San Sun Restaurant, was displaced by Muni's Chinatown Subway station project on Stockton St. and used its relocation settlement money to upgrade its amenities, though definitely not on rent, as it moved to the Kearny St. wasteland between Clay and Washington Streets. As its name implies, Joy Hing has a wide ranging menu of noodle (and some non-noodle) dishes, though "Phở" is prominent on its new signage and now leads off its longish menu, with pho ga (chicken pho) seemingly highlighted as a specialty. I ordered No. 2 on the menu, pho ga long, quaintly labeled as "chicken noodle soup with organs."

Heaven and Nature did not sing about my pho ga long.  When it arrived at my table (a little too quickly, I felt), the broth was salty and oily.  It was chicken-y enough, but had little character otherwise, as if it had been made from canned chicken stock or bouillon. There were large shreds of mostly white chicken meat, and little evidence of giblets. Worst of all were the wide rice noodles, which had been seriously overcooked and had no chew to them at all. If there was anything outstanding apout my pho, it was the two slices of fresh jalapeno pepper that came in the little condiment dish. They packed serious heat, and by themselves added a little depth to the broth. Even so, for once I didn't empty my bowl of broth once the noodles were gone; that's how phogettable my noodle soup was.

To be fair to Joy Hing, pho is just a small part of its many offerings and, in fact, was historically buried deep in the restaurant's menu.  It may not be Joy Hing's best asset. Something has been keeping this vintage restaurant afloat for a long time; I'll find out what it is, and report back.