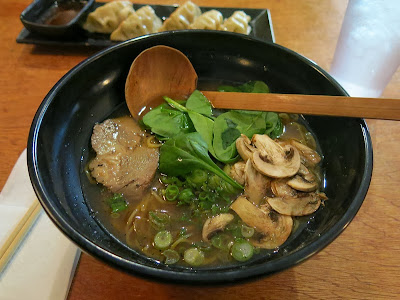 I hadn't done ramen in quite a while, and word of a new ramen-ya opening up in Japantown triggered my last Last In First Out alarm so I set out to vet it. However, it turned out that the new joint's opening had been pushed back a couple of days, so I reached into my bucket and pulled out a ramen hack I had been wanting to try, Habanero Ramen from Ramen Underground. 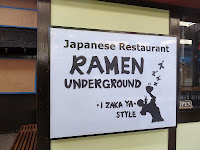 Ramen Underground originated in a small storefront on Kearny St. Although I walked by it several times a week, I never entered because it was always packed, and a somewhat claustrophobic space to begin with.  But I couldn't help but take note of their addition of habanero ramen to the menu, and when Ramen Underground opened a spacious branch in Japantown, that particular ramen hack ended up on my hot list.

In contrast to the Kearny St. hole-in-the-wall, Ramen Underground in the Miyako Mall was all but deserted when I arrived just after 1:30, though other holiday priorities undoubtedly had their effect on patronage, and a couple of other parties drifted in while I was eating.  "It'll be spicy," warned my server when I ordered the habanero ramen, along with a side order of gyoza. It had better be, I muttered under my breath. Anyone who could even pronounce "habanero" surely would know what was in store for them. 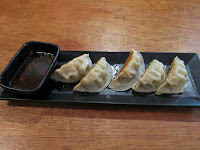 The habanero ramen at Ramen Underground is a habenero-infused shoyu broth. It is gloriously, lip-stinging spicy, more than the presence of a few physical slices of green pepper in the toppings would account for; obviously, some labor and time goes into making it what it is.  The fine ramen noodles erred on the right side of convention, being pleasantly chewy. Toppings included a solitary slice of chashu which seemed to have little flavor left, a generous quantity of mushroom slices and some greenery.  I would have preferred more broth in the bowl, partly because the broth was the most satisfying component, but also because the broth-to-toppings ratio seemed too low in any case.

(I have a friend who is married to a Japanese chef and has lived in Japan who complains that ramen in the U.S. in general comes with too little broth because Americans won't drink all the broth; I may be the exception that proves the rule.  After all, isn't the broth what ramen is supposed to be all about?)

If I have a main complaint about Ramen Underground's habanero ramen, it would be that it is unduly pricey, at $10.95 with no extras, relatively skimpy toppings and not enough broth for the noodles. 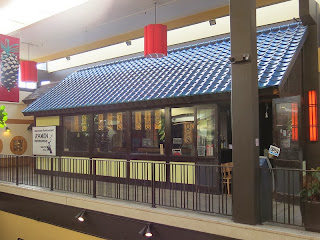