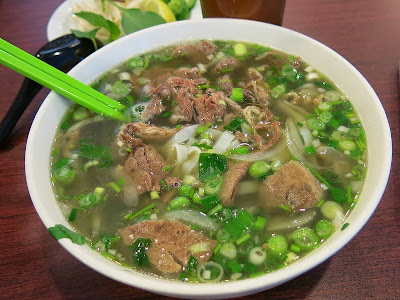 An earlier attempt to score a bowl of pho featuring bull pizzle, um, fizzled when I ordered the Pho Bo Ngau Pin Dac Biet at Quan Bac in the inner Richmond and  was told "We don't have that today" by the server. I suspected at the time they were holding it back from a presumably clueless guilao, avoiding the need to delicately explain what those chewy thingies in the soup were. Not wanting to be a dick about it by accusing them of culturally profiling, I meekly accepted the alternative suggested by the server, Pho Bo Dac Biet -- combination of well-done, rare beef and beef ball noodle soup

Fast forward to today, when, thanks to a Yelp advance scout, I got wind of the newly opened Quan Pho Viet Restaurant on Ocean Avenue. It was also reputed to have a bull pizzle pho and I jumped on the K car to check it out for lunch.  The decor and the menu both had a familiar look to them, and the server confirmed that they indeed were related to Quan Bac on Geary. Here, though, in the more hardnosed Ingleside, they took my order for No. 32 "Pho Bo Ngau Pin Dac Biet - combination beef noodle soup with bull pudendum" without batting an eyelash. 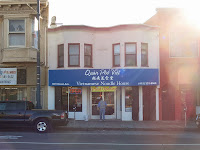 When my bowl of noodles came -- a little too quickly, I felt -- it did resemble (special ingredient aside) the pho dac biet I remembered at Quan Bac.  The generously sized "regular" bowl held a copious amount of fresh brisket, rare beef and beef balls, but there were some glaring faults. I don't know if it was because the restaurant is still in its shakedown period, having just opened, or because my timing was bad, arriving just after the lunchtime peak and just before the staff break for lunch, but the broth was less than piping hot when served and there seemed too low a ratio of noodles to broth.

What about the ngau pin a.k.a. bull pudendum?  The end to my quest was anticlimactic, you might say. I found a couple of two-inch longitudinally-sliced dense cartilaginous strips lurking at the bottom of my bowl; they were difficult to maneuver with chopsticks, even more difficult to chew, and had no taste of their own at all.  At least I got to cross an exotic ingredient off my list.